Amphicleia town, named in ancient years, has for millenia been located on the northeastern side of Mount Parnassos enjoying the spectacular view towards the valley unfolding at its feet. Amphicleia has always kept a special place in the heart of the inhabitants of the region and nowadays aspire to enchant the travellers on their way up to the ski resorts.

Amphicleia or Amphicaea was an ancient Greek town in the North of Phocis. It was destroyed by the Persian army of Xerxes in his invasion of Greece (480 BC). Although Herodotus calls it Amphicaea, following the most ancient traditions, the Amphictyonic League gave it the name of Amphicleia in their decree respecting rebuilding the town (346 BC).  For some time it also was called Ophiteia, in consequence of a legend, which Pausanias relates. The place was celebrated in the time of Pausanias for the worship of Dionysus, to which an inscription refers, found at Dhadhi, the site of the ancient town.

The main street of Amphicleia is located in the lower neighborhood, where it passes the central square with shops, banks, taverns, cafés, public buildings etc. The most fascinating and picturesque part of the town is in the upper neighborhood. Here, among the streets and the gardens, you’ll find most of the old Dadiotika storey houses with small balconies, ornate ironwork ahd heavy large wooden gates. Up here you’ll also find the traditional stone fountain of dancers. Nearby is the Parnassus square with taverns, a café and a distillery.

At the lower square it is worth while visiting the Museum of Bread, which is unique of its kind in Greece and one of the 5 that exist across Europe. The visitor will see (apart from the dozens of different breads) photographs, representational images and material from the rural life. There is the opportunity to learn about the process of growing and processing wheat and the customs about bread in general.

Tithorea is a village in Phthiotis about 15 km from Amphicleia. Since a local reform in 2011 it is part of the municipality Amfikleia-Elateia. It has a total population of nearly 5,000. The municipal unit consists of the town Kato Tithorea (the seat of the former municipality) and the villages Agia Marina, Agia Paraskevi, Modi and Tithorea. The peak Liakoura, the highest summit of Mount Parnassus at 2,457 m elevation, lies in the southernmost part of the municipality. The river Cephissus flows in the northern part. Kato Tithorea is served by the Athens-Thessaloniki railway line.

Cephissus is a river in central Greece. In Greek mythology the river god Cephissus was associated with this river. The river rises at Lilaia in Phocis, on the northwestern slope of Mount Parnassus. It flows east through the Boeotian plain, passing the towns Amphikleia, Kato Tithorea and Orchomenos. It drained into Lake Copais, which was therefore also called the Cephisian Lake, until 1887, when the lake was drained. An artificial outflow has been created to Lake Yliki (ancient Hylice), further east.

The ancient acropole of Drymis

The ancient walls of the Acropole of Drymis still standing a few kilometres north of Amfikleia – All photos by Effie I.

Agrinio, the land of lakes 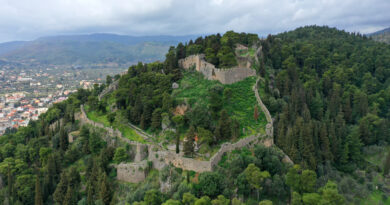 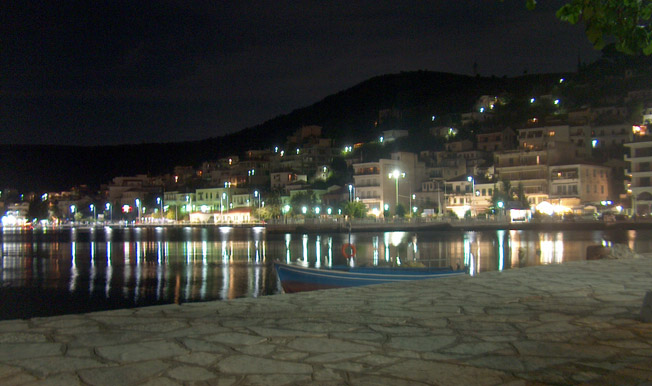