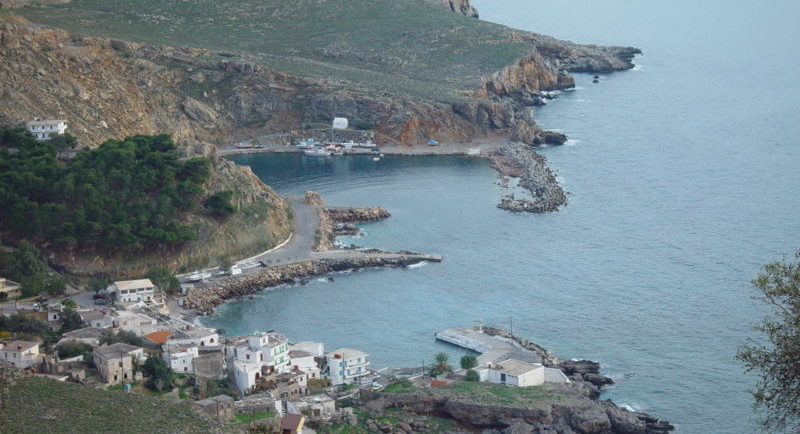 Agia Roumeli is a small village in southwest Crete and is popular with tourists. Located a few kilometres above the town is the southern entrance to the Samaria Gorge. For most walkers, this is the exit, as the usual route through the gorge is to descend from the north. The gorge is a popular tourist destination in Crete, the longest gorge in Greece, and one of the longest in Europe, measuring 18 km. The village has several hotels and a few rooms for rent and also some tavernas. Agia Roumeli has a large beach and a ferry slipway where the ferry to and from Hora Sfakion via Loutro, arrives, mainly used by walkers who have completed the Samaria walk. The village is not accessible by road.

Hóra Sfakíon or Sfakia is a town on the south coast of Crete. It is the capital of the remote and mountainous region of Sfakiá, and is a small town of just 278 inhabitants (2001 census). It lies near the end of the Imbros Gorge, 74 km south of Chania. It has two small harbours, where the ferry boats from Agia Roumeli dock, which in the summer bring the hikers from the Samaria Gorge to take buses back to the northern coast. From Hora Sfakion ferries also run to the nearby coastal town of Loutro and the island of Gavdos. Hora Sfakion is a small village with a main harbour front of tavernas, two minimarkets, a butcher and a bakery. There is a quiet local beach immediately West of the village, and several pebbly beaches nearby. The town offers a variety of tourist accommodation: rooms, studios and apartments. The local economy is based on tourism, fishing, olive oil production and sheep and goat herding.

Hóra Sfakíon prospered during the Venetian and Turkish occupations and up to the 18th century carried on a flourishing trade with its own small fleet. It was said to have had a hundred churches but the town suffered badly from wartime bombardment during the Battle of Crete and the Allied evacuation that followed.

Hóra Sfakíon is famous as one of the centers of resistance against the occupying forces of both the Venetians and the Turks. The impenetrable White Mountains to the north combined with the rocky beaches on the south helped the locals fight off all invaders. Anopolis, a village near Hóra Sfakíon, is the birthplace of one of the most celebrated Cretan revolutionaries, Daskalogiannis.

Loutro is a small place but it too has a rich history. Loutro is believed to be part of ancient Foinikas and the port of ancient Anopolis. It became the winter harbour of Sfakia. The gulf and the islet make a natural harbour where ships can be safe even in the worst of weather. Today nothing remains of ancient Phoenix except the name preserved by the small village in the bay west of Loutro. Later the Saracen pirates used Loutro as a lair from which to attack the ships sailing south of Crete. The Venetians managed to drive out the Saracens and fortified Loutro with a small fortress whose ruins are still visible today. Another fortress preserved in better condition in Loutro is evidence of the Turkish presence here.
Loutro is also a rocky islet in the gulf of Loutro in the Libyan Sea. The islet can be found close to the end of the Mouri cape.

The only way to get to Loutro is by ferry from Chora Sfakion. There is no road there, which is part of its unique charm. The boat leaves the harbour at Chora Sfakion, travels past the steep coastline with its caves and cliffs dropping sheer into the deep blue water, and enters the calm bay of Loutro where a row of white houses comes into view, crowning the small beach hidden in the arms of the Sfakia mountains.

Things to do in Loutro

Bungee jumping: If you love adventure and extreme sports, you can enjoy a plunge into nothingness by bungee jumping from the high bridge over the Aradaina Gorge. Watch (below) the video of a bungee jump from the 138 meters high bridge. Trekking: If you prefer a bit of a trek, walk along the spectacular and still lonesome Aradaina Gorge. Start in Loutro, walk up to Anopoli, follow the paved road to Aradaina. The entrance is just after the high bridge. and the exit is at Marmara beach, from where you can return to Loutro along the coast path. This trip may take more than six hours (breaks not counted), and in July or August when it is really hot, only experienced walkers should start on this trip. Some returning visitors find this the finest hike you can do in the area. 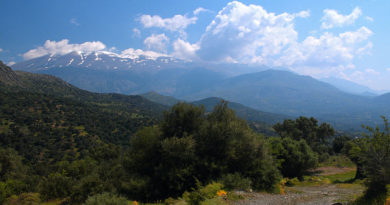 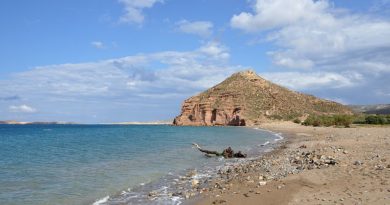 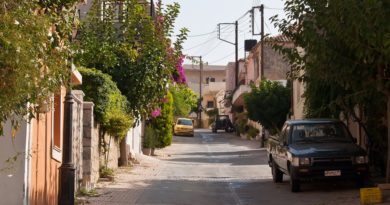