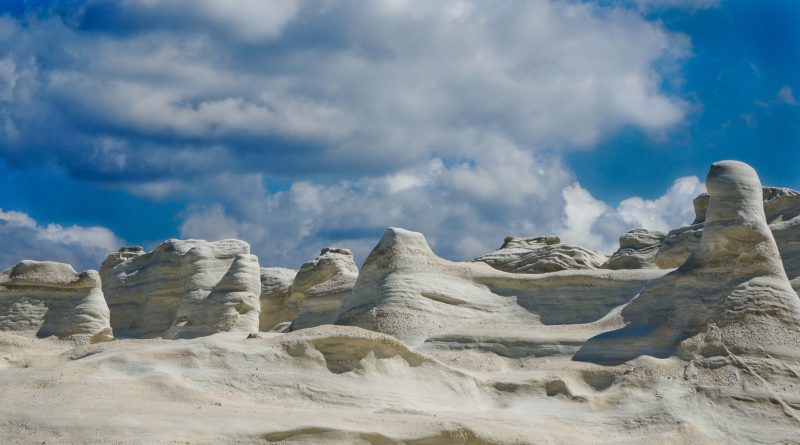 Milos is a volcanic Greek island in the Aegean Sea, just north of the Sea of Crete. It is the southwesternmost of all the Cyclades islands.

This is the place where they found the famous statue of Aphrodite (the “Venus de Milo”, now in the Louvre), and also statues of the Greek god Asclepius (now in the British Museum) and of Poseidon and an archaic statue of Apollo in Athens. The Municipality of Milos also includes the uninhabited offshore islands of Antimilos and Akradies. In 2001 the population was almost 5.000 inhabitants.

The position of Milos, that is between mainland Greece and Crete, and its possession of obsidian, made it an important centre of early Aegean civilization. Obsidian from Milos has been traded from the island since 13,000 years ago. Obsidian is volcanic glass, and a material which has been used for the manufacturing of weapons and tools. Milos lost its arms-making importance when bronze became the preferred material for weapons. At the site of Phylakopi (from the Bronze Age) which was the chief settlement of Milos, on the north-east coast, excavations by the British School of Archaeology revealed a town wall and a Minoan palace with some interesting wall paintings. “The famous fresco of the flying fish found in the ruins of the principal house or palace at Phylakopi, with its delicate coloring and graphic observation of nature in the graceful movement of the fish, seems to be the work of a Cretan artist, who probably was summoned to Milos for the purpose.” Part of the site has been washed away by the sea.

The founds made on Milos island were of three main periods, all preceding the Mycenaean age of Greece. Much pottery was found, including examples of an unusual style, with decorative designs, mostly floral, and also considerable deposits of obsidian. There are some traditions of a Phoenician occupation of Milos.

In historical times, the island was occupied by Dorians from Laconia. In the 6th century BC, the island, again, produced a remarkable series of vases, of large size, with mythological subjects and orientalizing ornamentation, and also a series of terra-cotta reliefs (Melian Reliefs).

Milos is the southwesternmost  of the Cyclades islands, 120 km east from the coast of Laconia. From east to west it measures about 23 km and from north to south 13 km. The biggest part of the island is rugged and hilly, with its peak in Mount Profitis Elias, 748 m, in the west. Like the rest of the of the islands in this area, it is of volcanic origin, with tuff, trachyte and obsidian among its ordinary rocks. The natural harbour is the hollow of the principal crater, which, with a depth diminishing from 130–55 m, strikes in from the northwest so as to separate the island into two fairly equal portions (see photo left), with an isthmus not more than 18 km broad. In one of the caves on the south coast, the heat from the volcano is still great, and on the eastern shore of the harbour, there are hot sulphurous springs.

Antimilos lies 21 km north-west of Milos and is an uninhabited islet consisting mainly of trachyte, often called Erimomilos (Desert Milos). Kimolos, 1.6 km to the north-east contained a considerable city, the remains of which cover the cliff of St. Andrew’s. Polyaigos lies 2 km south-east of Kimolos. It was the subject of dispute between the Milians and Kimolians. It is now uninhabited.

The harbour on Milos is Adamas; from this arrival point there is an ascent to the plateau above the harbour, where the chief town, Plaka and Kastro, are situated, as well as other villages. The ancient town of Milos was nearer to the entrance of the harbour than Adamas, and occupied the slope between the village of Trypiti and the landing-place at Klima. Here you will find a Roman theatre and some remains of town walls and other buildings, one with a fine mosaic excavated in 1896. This is also the spot where Aphrodite (now in Paris) along with numerous other fine works of art have been found. Other villages on Milos include Triovasalos, Peran Triovasalos, Pollonia and Zefyria (Kampos).

There are about 70 beaches on the island of Milos. Hivadolimni Beach is the longest at about 1 kilometre. The northern, southern and the bay beaches are tourists attractions. The eastern beaches are very quiet and the western are also quiet and lonesome beaches.

Sea excursions: With the organized sea trips you have the chance to visit beaches inaccessible from land, like for example the famous “Meteora Rocks of the Sea” or Kleftiko, the emerald-colored Sykia cave, Glaronisia and many more, to swim into the crystal clear waters of otherwise inaccessible beaches of spectacular beauty, to admire the island’s mineral wealth, to explore the secrete caves or to visit the neighboring islands.

There are plenty of boats, kayaks and yachts suitable for sea trips and you can choose the one you prefer according to your needs and mood. Most of the vessels depart daily from the jetty of Adamantas port. Moreover, besides Adamantas, kayaks depart from the beach of Kipos to Kleftiko, and from Pollonia to Kimolos, the cave of Papafragas and Glaronisia. Sea Kayaking: The volcanic composition of Milos island has created the impressive coastlines, the sea caves and tunnels that are worth visiting. Simultaneously, the waters are crystal clear, the beaches amazing and the deserted islands nearby are perfect for exploration. You can combine rowing exercise with relaxation on the beautiful deserted beaches and go hiking on the nearby uninhabited islands.

From April to October daily guided trips with canoe-kayak are offered as well as visits to the nearby islands that last several days combined with camping for the more adventurous travelers.

Hiking: The volcanic grounds and the magic geographic bas-relief make Milos a natural geologic park waiting to be explored.
For those of you interested in such an extraordinary tour, the Mining Museum of Milos organizes geologic walks to the most important locations of geological and mining interest on the island. (For more information visit: www.milosmminingmuseum.com or call at tel.: 22870 21620).
Besides this opportunity there are several footpaths that present a geologic and mining interest. For further info… Windsurfing and kitesurfing: Milos is providing the perfect weather conditions for windsurfing and kitesurfing and the unique waters around the island make it the perfect destination for amateurs and experts.
The natural bay of the island provides maximum safety. In order to enjoy the sense of freedom in your windsurfing, or to simply ‘’fly’’ on the green-blue waters we recommend the beaches of Axivadolimni and Papikinos.
The Naval Group of Milos is open during the summertime teaching windsurfing. There, the participants are taught windsurfing in Optimist and Laser type boats. (Naval Group of Milos- Kavalieros Iakovos, Contact info: tel: (+30) 22870 23787, (+30) 22870 28139, e-mail: nomilos@otenet.gr).

Scuba diving: The underwater world of Milos island  is of a rare, wild beauty. The numerous underwater caves, the wreckages from the Second World War and even prior to it, the shoals ending in waters with a great gathering of fish, the hot springs with the distinctive micro-societies they create and the rare species living on the island’s seabed (seals, blackfish, lobsters etc.) are some of the reasons that make scuba diving in the waters around Milos a unique experience. The two diving schools of the island have modern equipment and await you to help you explore the spectacular places.
Diving center: Ioannis Xavakis
Τel: (+30) 22870 28077, (+30) 69761 14846 Sailing/yachting: Yachting is the perfect way to discover the hidden beautiful bays and secret beaches of Milos, enjoying your holiday freely and autonomously. Moreover, because Milos is within a short distance from the rest of the Cyclades, you can combine your holiday in Milos with a visit to the rest of the nearby islands.

In Adamantas harbor a modern jetty has been created in order to supply yachts and sailboats with water, fuel, and free internet connection. It gives you the opportunity to go shopping, etc. There are also restaurants, taverns, cafeterias, busses, taxis for tours on the island and there is access to health services (community clinic).

Fishing: Milos is, just like the rest of the Cycladic islands, the perfect place for fishing. You can either go underwater fishing with the harpun or fishing with nets, trawl-lines, fishing with trolling, angling or fishing with fishing-rods. The fishes vary depending on the season and the place, whereas the rest of the Melian fauna is extremely rich including many fish species (red mullets, pandoras, dorados, sargos, saddled breams, black breams, tunnies) and even octopuses, squids, cuttlefish, lobsters. Horseback riding: Milos is perfect for horseback riding. You can go riding along the sea or in the mountainsand you can as well receive horseback riding lessons.
You do not need to be experienced in order to ride a horse, and during riding tours you are always accompanied by experienced guides. You are free to choose the location for the tour or simply follow one of the recommended routes.

Health travel: The volcanic activity and the meta-volcanic hydrothermal action has given a lot of hot springs on the island of Milos, well-known in antiquity for their therapeutic power. Characteristically, Hippocrates refers to the therapy from skin diseases (in his book E’ “On epidemics”) at the Hot Springs of Lakkos in Milos. The island is full of hot springs of different temperature and water composition. Below you can be informed of the most important one:

Lakkos Adamantas Hot Springs
(located in the left side of Adamantas harbor, in a cave of 15m)
Temperature: 33-41C, depending on the sea level and the weather.
Composition: Thermal mineral sulphide, ferrous, chlorinated
Their therapeutic indications are:

At the beaches of Alikes, Provatas, Skinopi, Paliohori, Tria Pigadia, Kanava, in the places where hot springs exist, you will see fumaroles gushing within the sea water and you can enjoy your swim completely for free all year round. However, out of all the hot springs, the only exploitable and recognized as a therapeutic spa-spring of a healing importance, is that of “Lakkos” in Adamantas, which is mentioned in Hippocrates’s works. 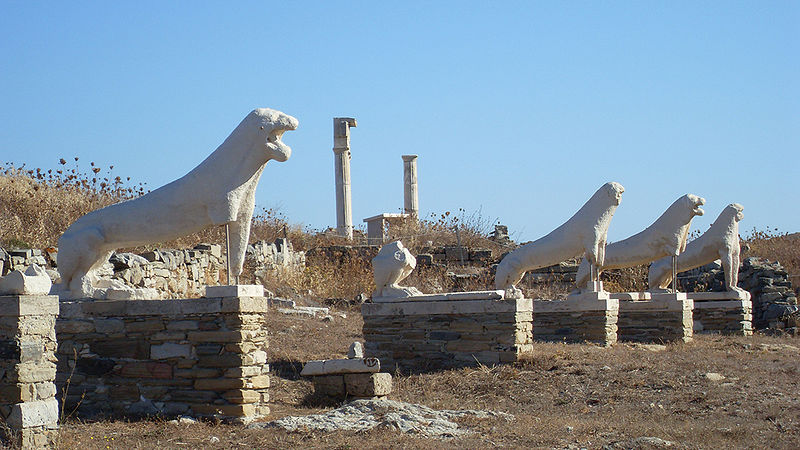 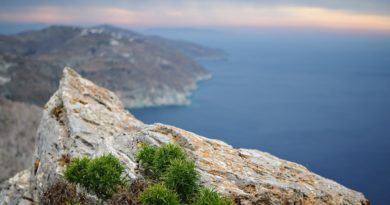