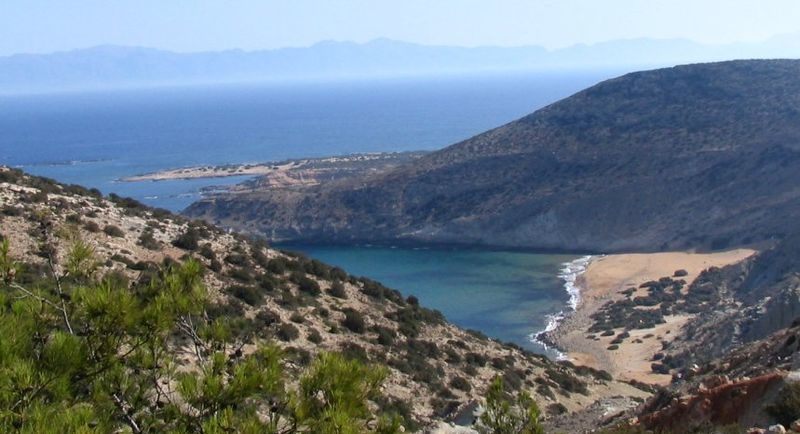 The island is 26 nautical miles (48 km) south of Hora Sfakion. The island is roughly triangular in shape. Its highest point is Mount Vardia, with 345m. The southeastern corner is a rocky peninsula with a natural arch carved by the elements, called Trypiti. A sculpture of an oversized chair sits on top of Trypiti.

There is an islet called Gavdopoula (“little Gavdos”) to the north west of Gavdos. Gavdos and Gavdopoula are covered with phrygana, low-lying shrubs. Both are important stops for migrating birds. Local birds include the Eurasian Scops owl and the European Shag. Gavdos also has a variety of other vegetation, such as maquis as well as forests of pines and junipers.

There are only a small number of year-round residents of Gavdos and services for tourists are basic. As of 2001, the total population of Gavdos was measured as 98 people. In the summer the total number of people on the island can reach over 3,500, most of whom are campers. The harbour for ferries is Karave. Kastri is the capital of the island. Gavdos has supported a permanent population since Neolithic times.

It has been identified as a possible site of the mythical Ogygia where Kalypso held Odysseus prisoner. Archaeological evidence showed that the Roman empire was active on the island. During this time the flora of the island was overexploited, this started a process of erosion which has continued to this very day.

Gavdos had about 8,000 inhabitants by 900 CE. During the Ottoman Empire’s reign on the island, which lasted from 1665 until 1895, Gavdos was known as Gondzo. During this period the population decreased considerably to only 500 by 1882. A reference to Saracens on the island survives: the beach Sarakiniko (“of the Saracens“).

In the 1930s the island was used as a place of exile of communists; more than 250 people were exiled including leading figures of the Greek movement, such as Markos Vafiadis. During World War II, allied forces evacuated some forces to Gavdos following the German victory in the battle of Crete.

There are many abandoned terraces on Gavdos where farmers used to grow crops on the hillsides. There still is some agriculture on Gavdos. During the summer, the population of the island swells to a few thousand because of tourists, although there are few facilities for tourists. There is one year-round cafe in Carave (Karabe) on Gavdos run by Evangelina Tsigonakis. There is a modern non-functioning reproduction lighthouse tower on Gavdos which now serves as a cafe during the summer season; the complex also contains a museum on the history of the original lighthouse with several rooms of photos and antique equipment. Gavdos is home to an FM radio station, Gavdosfm 88.8.

Potamos is a beautiful beach in the northwest part of the island. It is sandy with yellow and red sands. Unfortunately, the beach of Potamos can only be reached by boat because of the surrounding hills with no footpath leading to it. Most people trying to make the walk to Potamos beach end up just watching the beach from above without finding a safe path down, but few people do succeed by finding the Ambellos path.

The beach of Tripiti is situated on the south coast of the island and it is famous for its beautiful rockformations. The rocks in the sea form arcades. The name of this southern point is Tripiti (“tripa”=hole) and there are three hole-caves (arches) under the rock that runs into the sea. From Korfos, you can walk until this spectacular beach. The footpath is about 3 km (about an hour’s walk), there are signs and you cannot miss it. This is the southernmost point in Europe. Standing on top of a rock in Tripiti is a very large chair that you have to climb onto in order to sit on it.

The beach of Agios Ioannis is situated on the north side of the island, and was voted as the second most beautiful beach in the world by the Travel Channel in 2007. Agios Ioannis (St John’s beach) is situated next to the tiny village with a population of ten, and it is home to several impressively large caves. There are no hotels or pensions, only the sea, the sand and a beautiful view of the island of Crete. At the busstop of Agios Ioannis (end of the road) you will find the only tavern in this region of Gavdos by the name of “Kapetan Theofilos”.

The beach of Pyrgos is also situated on the north side of the island. It can be reached by small boats or on foot after a long and adventurous walk. Pyrgos beach is quiet and isolated with no facilities. You have to bring your own water and food supplies.

Sarakinikos Beach – At a 20 minutes walking distance you will find the most “cultivated” beach of the island (with a taverna or two and a few accommodations). The sandy, large beach of Sarakinikos is situated to the northeast of the island at a 2 km walk north of the harbour by a dirt track.

Korfos Beach – As you walk inland from the harbour Karave and arrive at the crossroads and a couple of houses, you turn left (there is a sign) to reach this beach (if you turn right you’ll reach Sarakinikos beach). It’s a beautiful walk along the coastline. At Korfos Bay there are some rooms for rent at Georgos and Maria’s Taverna.

If you choose to stay on Gavdos for more than just a day, there are only few accommodations around the island, so it would be best to book in advance. There are 4 places all in all to choose from. You can also choose to place your tent under a tree, camping in the open nature. 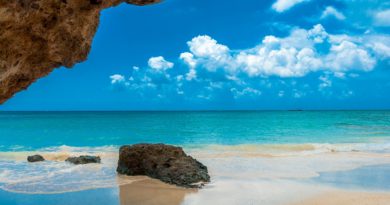 Travel to Elafonisi Island and Paleochora