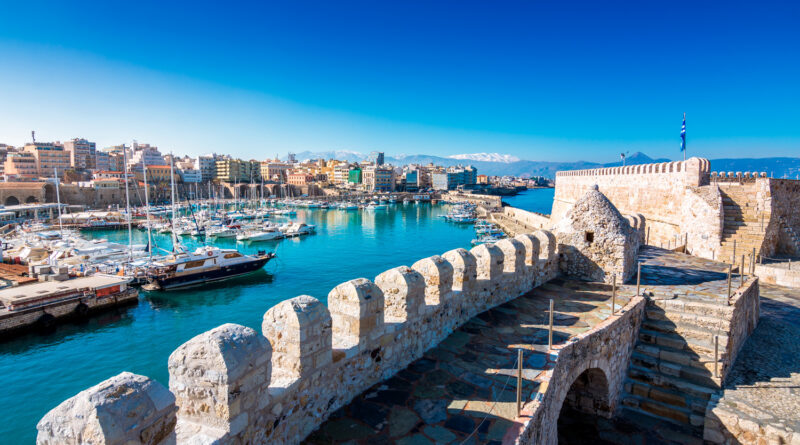 The busy capital of Crete, Heraklion, is not to be compared with the beautiful, quaint towns of Chania, Rethymno, and Agios Nikolaos. It has though, some well-preserved buildings and ancient remains worth seeing, but the main reasons to visit Heraklion should be its museums where you will see the most significant findings from all the Cretan ancient sites. Near Heraklion you will find plenty of beautiful holiday resorts, like Malia, Matala, or Hersonissos.

Heraklion is the largest town in Crete with a population of 130.000 inhabitants. It is also the commercial, administrative, industrial, and agricultural center of the island. Most inhabitants are occupied with tourism, agriculture, and trade. Not far from Heraklion lies the ruins of the Minoan palace of Knossos, which were excavated and restored by Arthur Evans. Heraklion is a busy port, and it has gone through a tremendous development since WWII, and therefore it also has many problems with its infrastructure.

The founding of Heraklion

In the Minoan (prehistoric) times there must have been houses scattered in the current center of Heraklion and some small communities living in the surrounding hills. The area east of Heraklion (Poros, Katsambas, Bodrum and the airport area by the river and Karteros Amnissos) show signs of habitation both because of its geomorphology and because it was the natural outlet of Knossos to the sea through Kairatos river. Kairatos river is flowing into the sea at Katsambas – east end of the current port of Heraklion. This is evidenced by recent excavations in the area of ​​Katsambas, which brought to light part of the Minoan port facilities.

Heraklion under the Byzantine Empire

In the early Byzantine period (4th to 9th AD), the small town Heraklion, was known by the name Castle, a name suggesting some form of fortification. Crete was then a province of the Byzantine Empire with its capital in Constantinople, while the administrative, military and religious center of the island was Gortyn. The cities in northern Crete appear less developed as the sea routes passed south of the island.

The Castle of Moat

The Arab raiders (Saracens) from Andalusia who founded the Emirate of Crete moved the island’s capital from Gortyna to that of a new castle they called ‘Castle of the Moat’ in the 820s.  They built a moat around the city for protection, thereby the name “Castle of the Moat”.
The Saracens allowed the port to be used as a safe haven for pirates who operated against Imperial shipping and raided Imperial territory around the Aegean.
After the Byzantine reconquest, the city was locally known as Megalo Kastro (the Big Castle in Greek).
The ancient name ‘Irakleion’ was revived in the 19th century and comes from the nearby Roman port of Heracleum (“Heracles’ city”), whose exact location is unknown.

Things to see in and near Heraklion

HIKE AND CLIMB IN THE ASTEROUSIA MOUNTAINS AND THE ELIGIA GORGE IN THE AREA OF KAPETANIANA. VIEW THE PEAK OF KOFINAS.

A DAY IN DIA ISLAND

Where to stay in Heraklion town?

Where to eat in Heraklion town?

Museums to visit in Heraklion

Heraklion – How to get there?

Heraklion port is an important shipping port and ferry dock. Travelers can take ferries and boats from Heraklion to a multitude of destinations including Santorini, Ios, Paros, Mykonos, and Rhodes. There are also several daily ferries to Piraeus, the port of Athens on mainland Greece.

Heraklion International Airport “Nikos Kazantzakis” is located about 5 km east of the city. The airport is named after Heraklion native Nikos Kazantzakis, a writer and philosopher. It is the second busiest airport of Greece, due to Crete being a major holiday destination.

There are regular domestic flights to and from Athens, Thessaloniki and Rhodes. Cyprus Airways and Aegean Airlines fly to and from Larnaca, in Cyprus. Furthermore, Sky Express operates direct flights to Aegean islands such as Rhodes, Santorini, Samos, Kos, Mytilini, and Ikaria.

Aegean Airlines has an international schedule to and from London and Paris and EasyJet flys direct from London Gatwick. During the summer, the number of scheduled and chartered flights increase as do the number of airlines that fly direct from all over Europe (mostly Germany, UK, Italy, and Russia).

Traveling in Crete by car

The European route E75 runs through the city and connects Heraklion with the three other major cities of Crete: Agios Nikolaos, Chania, and Rethymno. There are a number of buses serving the city and connecting it to many major destinations in Crete.

Weather and climate in Heraklion

Crete has a warm Mediterranean climate. Summers in the lowlands are hot and dry with clear skies. Dry hot days are often relieved by seasonal breezes. The mountain areas are much cooler, with considerable rain in the winter. Winters are mild in the lowlands with rare frost and snow. Because Heraklion is further south than Athens, it has a milder climate.

VISIT THE MONASTERY OF KARDIOTISSA, THE DIKTEON CAVE, A CERAMIC WORKSHOP AND A OLIVE OIL FACTORY IN PSYCHRO VILLAGE, LASSITHI PLATEAU, AND THE PALACE OF KNOSSOS 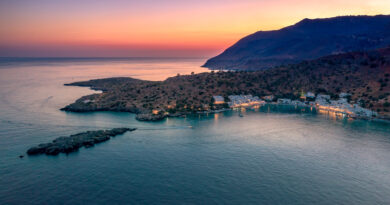 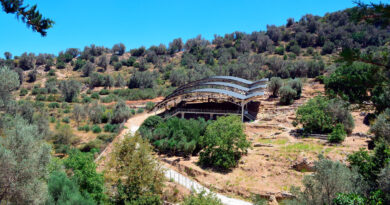