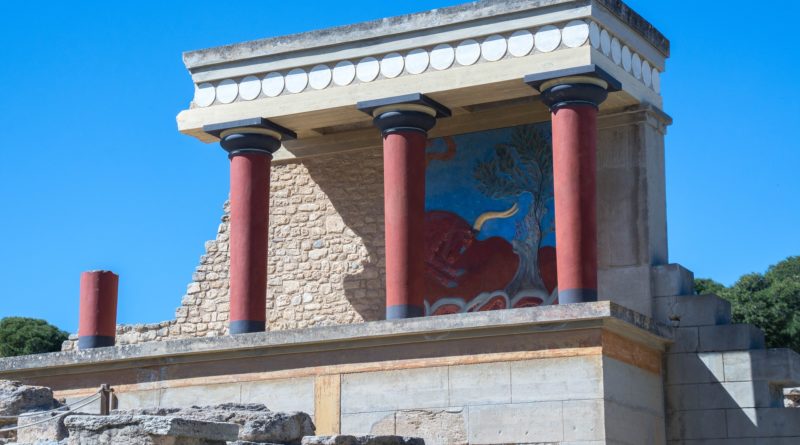 Knossos, a Minoan palace is a place of history, legends, and the most extensive and important archaeological site in all of Crete. The palace is by far the largest, most complex, and most luxurious of all in Greece.

Knossos, also known as Labyrinth, or Knossos Palace, is the largest Bronze Age archaeological site on Crete and probably the ceremonial and political centre of the Minoan civilization and culture. The palace appears as a maze of workrooms, living spaces, and store rooms close to a central square. Detailed images of Cretan life in the late Bronze Age are provided by images on the walls of this palace. It is also a tourist destination today, as it is near the main city of Heraklion and has been substantially restored by archaeologist Arthur Evans.

The discovery and excavations of Knossos

The ruins at Knossos were discovered in 1878 by Minos Kalokairinos, a Cretan merchant and antiquarian. He conducted the first excavations at Kephala Hill, which brought to light part of the storage magazines in the west wing and a section of the west facade. After Kalokairinos, several people attempted to continue the work, and Heinrich Schliemann had previously showed an interest but it was not until March 16, 1900 that archaeologist Sir Arthur Evans, an English gentleman of independent means, was able to purchase the entire site and conduct massive excavations. The excavation and restoration of Knossos, and the discovery of the culture that he labeled Minoan, is inseparable from Evans.

The site has had a very long history of human habitation, beginning with the founding of the first Neolithic settlement circa 7,000 BC. Over time and during several different phases that had their own social dynamic, Knossos grew until, by the 19th to 16th centuries BC (during the ‘Old Palace’ and the succeeding ‘Neo-palatial’ periods), the settlement possessed not only a monumental administrative and religious center (i.e., the Palace), but also a city with a population of up to 100,000. The site was destroyed by fire but has been reconstructed.

The legend of the Labyrinth (Maze)

The palace is about 130 meters on a side and since the Roman period has been suggested as the source of the myth of the Labyrinth, an elaborate mazelike structure built for King Minos of Crete and designed by the legendary artificer Daedalus to hold the Minotaur, a creature that was half man and half bull and was eventually killed by the Athenian hero Theseus.

“Labyrinth” may have come from ‘labrys’, a word that refers to a double, or two-bladed, axe. Its representation had religious and probably magical significance. It was used throughout the Mycenaean world as an apotropaic symbol: the presence of the symbol on an object would prevent it from being “killed”. Axes were scratched on many of the stones of the palace. It appears in pottery decoration and is a motif of the Shrine of the Double Axes at the palace, as well as of many shrines throughout Crete and the Aegean.

The great palace was gradually built between 1700 and 1400 BC, with periodic rebuildings after destruction. The 1,300 rooms are connected with corridors of varying sizes and direction, which differ from other contemporaneous palaces that connected the rooms via several main hallways. The palace used advanced architectural techniques: for example, part of it was built up to five storeys high.

A long-standing debate between archaeologists concerns the main function of the palace, whether it acted as an administrative center, a religious center, or both, in a theocratic manner. Other important debates consider the role of Knossos in the administration of Bronze Age Crete, and whether Knossos acted as the primary center, or was on equal footing with the several other contemporaneous palaces that have been discovered on Crete. Many of these palaces were destroyed and abandoned in the early part of the 15th century BC, possibly by the Mycenaeans, although Knossos remained in use until it was destroyed by fire about one hundred years later. Knossos showed no signs of being a military site; for example, it had neither fortifications nor stores of weapons. 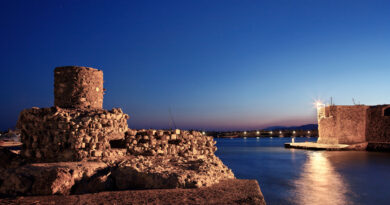