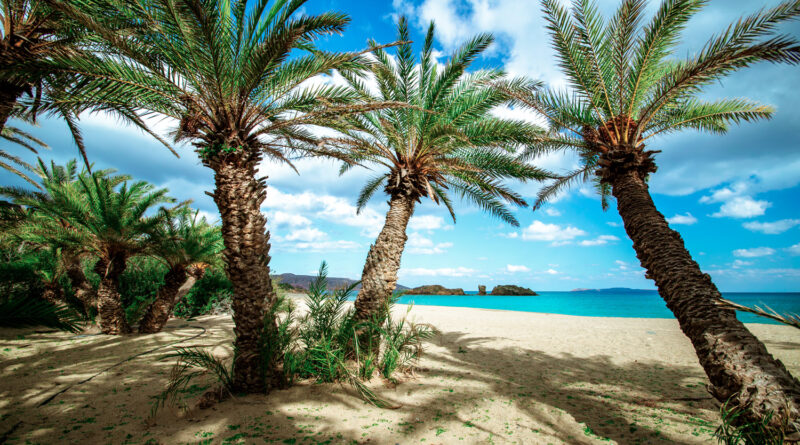 The palm beach of Vai is one of the largest attractions of Crete. It features Europe’s largest natural palm forest, consisting of Cretan Date Palms.

Vai was discovered at the end of the 1970s by the last Hippies who fled the hot-spots Matala and Preveli. At the beginning of the 1980s Vai was full of backpacker tourists from the whole world, something which created a mixture of chaotic campground and garbage dump. Vai was then enclosed and declared as a protected area by the local authorities. The unique forest recovered, the beach became clean.

Where is Vai Palm beach?

How to reach Vai Palm Beach?

FROM SITIA (JSH) AIRPORT TO VAI

Another way to reach Vai on the east coast from Heraklion is to rent a car and drive the same route by yourselves. It is a total length of 150 km and a travel duration of 3-4 hours.

The palm beach, which belongs to the Moni Toplou, is the touristic center of East Crete, with thousands of visitors each year. Vai lies close to Palekastro, Sitia and the Dionysades islands.

Vai beach is organized with all tourist facilities like straw umbrellas and sunbeds. It also has wooden walkways for easy access. The parking lot is 200 m from the beach. It costs a few euros to rent an umbrella and sunbed, but you will also find shade under the palm trees. There are toilets and beach showers. You will find watersport facilities like jet-skiing, wakeboarding, and banana boat for rent.

There is only one cafeteria near the beach situated near the steps to the viewing point. It has its tables set among the palm trees.

Being very popular the beach tends to be crowded during high season in July and August, but if you visit in the beginning of the tourist season or at the end you will find the scenery much more peaceful.

Moni Toplou is a 15th century monastery located in a dry and barren area in the Lasithi regional unit, on the eastern part of the island of Crete. It is about 6 km north of the village of Palekastro and 85 km east of Agios Nikolaos. The monastery was originally called Panagia Akrotiriani (Virgin Mary of the Cape), after the nearby Sidero cape. Its current name literally means “with the cannonball”, thus called by the Turks for the cannon and cannonballs (Turkish: top) it had in its possession for defensive purposes.

The monastery was robed by the knights of Malta in 1530 and destroyed in 1612 by a strong earthquake. Due to its strategic position, the senate of the Republic of Venice, then ruler of Crete, decided to financially support the rebuilding of it. The monastery flourished until the surrender of eastern Crete to the Turks in 1646, after which it was abandoned for many years. In 1704, it acquired special protection privileges from the Patriarch and was re-inhabited.

The monastery during revolution and war

During the Greek Revolution of Independence in 1821 the monks of Toplou were slaughtered by Turks; after this the monastery was again deserted until 1828. In 1866, during the massive Cretan revolt against the Turks, it was once again devastated. During the German occupation of 1941-44, Toplou was providing shelter to resistance fighters and housed their wireless radio. When this was discovered by the Germans, the abbot and two monks were tortured and executed.

Having to defend itself from pirates and invaders, Toplou monastery is heavily fortified, being laid out around a courtyard paved with sea pebbles and surrounded by strong, 10 meters high square walls. In its present form it extends to about 800 square meters in three floors, divided into cells, guest houses, kitchens and warehouses. The main church is built as a two-nave basilica and the belltower dates back to 1558.

Exhibition of a great art collection

Despite its turbulent history, Toplou has many works of art in its possession. Today, it hosts an interesting exhibition of Byzantine icons, books and documents, a display of ancient engravings and a collection of artefacts which reflect its role in the historical events that influenced Crete during the last centuries. The monastery possesses a series of about 20 portraits of monks, despotes and igoumens painted by the famous portraitist Thomas Papadoperakis. Many of them have written the recent tragical history of the place. The walls of the monks’dining hall, are also adorned with remarkable fresco paintings by the icon painter Manolis Betinakis.

The Dionysades or Gianysades is a small group of islands off Sitia on the northeast coast of Crete. The group includes the islands Gianysada, Dragonada, Paximada, and Paximadaki. Administratively this group comes within the Sitia municipality in Lasithi Prefecture.

This island group is part of an environmentally protected area with many rare plants and animals including the falcon, Falco eleonorae, which finds sanctuary here.

These islands were once a place of worship of the ancient Greek god Dionysus. Archaeologists have found artifacts, from ancient and early Christian eras, indicating that the islands may have been inhabited in the past. 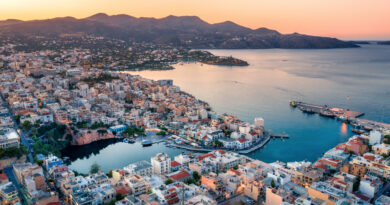 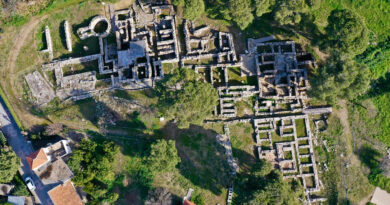