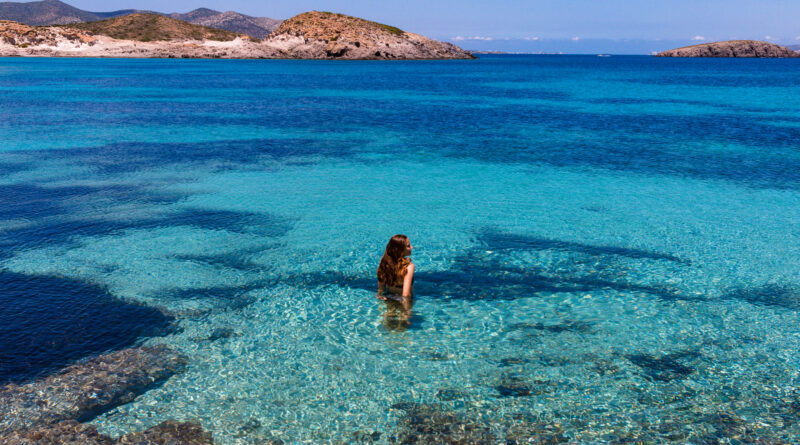 The small and charming island of Antiparos lies offshore from Paros. Only a short ferry ride away from Paros you can cross over on a day trip or stay a few days. As soon as you cross over you feel a distinct slowing down in the pace of things. Antiparos boasts stunning beaches and a crystal-clear sea perfect for scuba diving with reefs, wrecks, and caverns.

Where is Antiparos Greece?

How Big is Antiparos?

How to Reach Antiparos?

What does “Antiparos” mean?

Why to Visit Antiparos?

Antiparos – What to See?

Antiparos – What to Do?

Weather and Climate in Antiparos

Having left the main village and port, called Antiparos you will find a quiet countryside with several good beaches, Psaralyki near town and to the south Glyfa and Soros. It is also in the southern part of Antiparos you will find one of the most celebrated caves in Greece. For millennia, the island has been inhabited by humans – Greeks, pirates, Venetians, and Turks. In recent years Antiparos has acquired a “secret getaway” factor for those who do not want to be disturbed. Hollywood stars, royalty, and rock stars spend days in a laidback atmosphere on Antiparos.

Where is Antiparos Greece?

Located in the heart of the Aegean Sea, less than one nautical mile (1.9 km) from Paros island, Antiparos belongs to the Cyclades archipelagos. Antiparos has less visitors than its neighbor Paros with a laidback holiday style. The port of Antiparos is interconnected with Paros by a local ferry. In the strait between Antiparos and Paros you find Saliangos island which has the most ancient settlement in the Cyclades and southwest of Antiparos you find Despotiko, an uninhabited island and a place of great archaeological importance.

How big is Antiparos?

The island of Antiparos is lying 0.8 nautical miles southwest of Paros. The ferry port abstains from the main port of Parikia by 4.8 nautical miles. In the past, Antiparos was united with Paros; now it is separated from it by the Strait of Antiparos, known as Amfigeio, 500-1000 m wide and 4.5 m deep. The maximum length of the island is 7 miles in a direction North-south, while the maximum width reaches 2.8 miles.

The economy of Antiparos is based on tourism, fishing, farming and less on agriculture in the plains. It is known for its distinctive Cycladic beauty with white houses, cobbled streets and beautiful flowers that thrive in the yards. It is a popular tourist resort in the summer for Greeks and European visitors, as well as land investors from the United States.

Antiparos is a volcanic rock, with a dry climate and high humidity, and the morphology favors the development of strong winds. The flowers which thrive in the region are mainly bougainvillea that adorn the gardens, houses, and shops. The morphology of Antiparos is essentially flat, with many small hilly peaks, while the vegetation of the island is low.

How to reach Antiparos?

Being a rather small island Antiparos is only accessible by ferry from Paros. You therefore need to reach Paros first and then travel to Antiparos by ferry from Pounda port. The trip lasts only ten minutes and tickets are booked on the location. The ferries transfers passengers as well as private vehicles.
The nearest airport is Paros National Airport which is connected with Athens, Thessaloniki and Heraklion, Crete. During summer it receives flights directly from different destinations in Europe. Staying in Paros you can choose to go on a day trip to Antiparos.

What does “Antiparos” mean?

The name “Antiparos” means “opposite Paros” referring to the close distance to the bigger island of Paros. In ancient years Antiparos had the name “Oliaros”, a word probably of Phoenician origin, meaning “wooded mountain”.

Why to visit Antiparos?

Antiparos is famous for its beaches, so swimming and snorkeling is some of the best activities in Antiparos. Most of the beaches are within walking distance from Chora, the capital and port of Antiparos, boasting soft sand and crystal-clear waters.

The beaches on Antiparos all have clean water and a peaceful environment. Go swimming or diving in the transparent waters, all beaches can be accessed on foot from Chora. You can also take the town bus during the day hours.

Antiparos – What to see?

Antiparos Cave is the most impressive sight on the small island. You will find it on the southern side of Antiparos, stunningly beautiful full of stalactites and stalagmites. In Chora Antiparos you can see the Venetian castle and fortress of the island and have a walk among the charming, traditional Cycladic houses.

At the center of the island at the foot of the mountain of Antiparos is the famous Cave of Antiparos to be found. It is one of the most beautiful and mysterious caves in the world. The area of the cave was used as a natural shelter from the Neolithic period and onwards. The place was also used for pottery and for worshipping of the goddess Artemis. At the entrance of the site a simple but charming church of Agios Ioannis Spiliotis was erected.

A cave full of history

During the German occupation, a part of the cave was destroyed. One of the oldest references to the historic cave is that of the poet Archilochus of Paros in the 7th century BC. Signs and scratches on the stalactites and stalagmites attest to the passers, as the inscription on the altar of the generals of Alexander the Great and King Otto.
The cave was fully exploited in the second part of the 20th century with funds from the CSF by erecting barriers, building adequate steps, together with installation of lighting, security cameras and loudspeakers to inform visitors.

Chora Antiparos, the main settlement on the island, lies at the north-eastern tip of the island with Pounda on the other side of the channel on Paros, where ferries sail for Antiparos harbour. The historical centre is in the Venetian castle of Antiparos, which is connected through the shopping streets in the picturesque coastal street. Another village is the famous resort of St. George on the southwest coast.

Antiparos – What to do?

The Meltemia, the strong summer winds are roaming through the sea strait between Paros and Antiparos making it the perfect spot for windsurfing and kitesurfing. Most organized windsurfing centers are to be found at the side of Paros, but a few are also making their appearance on the beaches of Antiparos. Specially, Psaralyki and Glyfa beaches have good windsurfing possibilities in Antiparos.
Spot One on Psaralyki Beach

Bonfire Night takes place at midsummer night on June 23rd where all garlands hung by the locals over their front door are collected and piled up at the port of Antiparos in the sand along the waterfront. The tradition is to set fire to the garlands and enjoy the huge bonfire.

This is the greatest summer event in Antiparos and the celebrations last for three days. Activities like sports, concerts and parties are going on until the early morning hours.

Weather and climate in Antiparos

Like most of the other Cyclades Antiparos has a warm and sunny weather most of the year, only cooling down a little during the winter season. The winter is mild lasting only from January to March with temperatures ranging from 11°C to 13°C. During spring from primo April till ultimo May the temperatures are ranging from 14-16°C to 20-22°C. Summer is the high season for tourism where great temperatures ranging from 25-32°C – perfect for relaxing under the sun. Like in most of the Cyclades during July and August the “Meltemia” winds blow strongly cooling down the hot midsummer days. September and October the weather remains beautiful until the months of November and December where temperatures start dropping. Antiparos has only extraordinarily little rainfall during the year.

The island of Antiparos is surrounded by many small uninhabited islands with great historical and archaeological interest, such as Kimitiri, Strongylo, the Diplo, Kavoura, Revmatonisi, and the Red and Black Tourlos. Particularly well known internationally is Despotiko, an uninhabited island west of Antiparos, which in recent years carried out excavations of great archaeological value.

The Isle of Despotiko is identified with ancient Prepesintho, according to the writings of Strabo and Pliny. The first excavations at Despotiko made in 1889 by Christos Tsountas revealed Cycladic cemeteries. In 1959 Nikos Zafiropoulos began excavations at Zoumparia and Mantra, on the northeast coast, where they were architectural Doric temple from the ancient times, dating to 500 BC.
The 1997 excavations at Mantra by archaeologist Giannos Couragio, brought to light a large portion of the auxiliary space of a sanctuary. The findings of the excavation include an elongated complex, consisting of five consecutive parallel rooms. In the southern room important findings identified to be of archaic materials East-Ionian, Rhodian, Cypriot and Egyptian origin.

Saliangos is a tiny island on which an archaeological site was discovered (by the same name) and which might be the oldest settlement in the Cyclades. The islet is not even 500 m² and is in the northern cluster of Antiparos islands, north of the small strait between Paros and Antiparos. In antiquity and up to Byzantine times the sea level was lower, and more land was above sea level.
The settlement was discovered in 1964-1965 by British archaeologists of the Archaeological Institute in Athens and excavations were conducted and an archaeological study was undertaken. The settlement dates to Neolithic times and in accordance with the method of radiocarbon it was inhabited between 4300 – 3700 BC.

In the ruins of the ancient village many ceramic fragments was found. Nearly 3.5 tons of ceramic material was studied by archaeologists, who managed to assemble 60 clay pots and utensils in whole or in part.
The culture of the village on Saliangos islet is unique and an isolated example in the Neolithic era. In the surrounding areas there has not been found similar settlements, nor does it seem that the traditions of this settlement have been disseminated in the subsequent seasons.
On the nearby islands only little evidence of human activity has been found, eg. a few ceramics on Naxos. Saliangos is the only island in the Aegean practicing farming in those times. 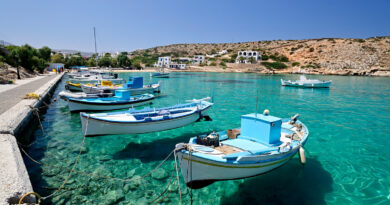 Iraklia – Hidden, Charming Gem with a Slow Pace of Life 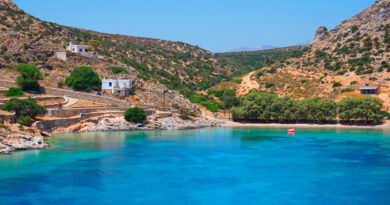