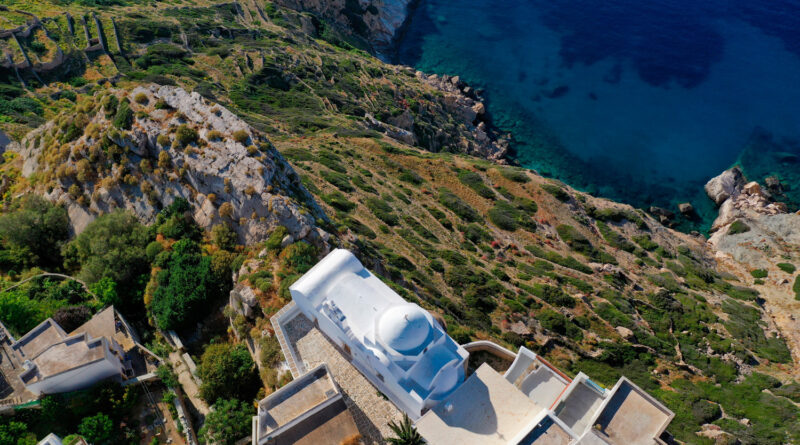 In between Paros and Santorini, you find Folegandros – a small island of incredible natural beauty. So close to the most cosmopolitan Greek islands and yet so far – in style. Folegandros is rather untouched by international visitors and therefore still has its own unspoiled charm and tranquillity.

Folegandros – How to get there?

Folegandros – How to get around?

Folegandros – What to do?

The villages of Folegandros

Folegandros – What to see?

Folegandros is for you who enjoy nature most when it is wild and rough and prefer a peaceful atmosphere. Among the Cyclades Islands Folegandros is one of the most picturesque. Here you can relax and wind down just enjoying nature and the friendly atmosphere.

Where is Folegandros Greece?

Folegandros  is a small island which, together with Sikinos, Ios, Anafi and Santorini, forms the southern part of the Cyclades. Its surface area is about 32 km². It has three small villages, Chora, Karavostasis, and Ano Meria with about 650 inhabitants all together. Folegandros is part of the Thira region.

Folegandros – How to get there?

Being of a quite small size Folegandros has no airport. The nearest airport is that of Santorini. Santorini National Airport (JTR) is also known as Thira Airport. It serves domestic flights between Santorini and Athens and is connected to several international airports in Europe as well. You will find direct flights to Santorini from United Kingdom, Germany, Italy, Switzerland, The Netherlands and Latvia. From the airport of Santorini, you can reach the port by taxi or public bus. Here there are ferries on a regular basis to Folegandros. You can also choose a flight to Athens and to embark on a ferry from Piraeus port in Athens. This trip lasts from 6 to 8 hours.

Folegandros – How to get around?

You can get around the island of Folegandros walking or going on a private boat tour to the picturesque sea villages of the island and the most secluded beaches.

Except for being a beautiful destination, Folegandros is also an ideal base for island hopping to the rest of the Cyclades islands. Ferries from Folegandros to Mykonos and Santorini depart daily from the port of the island, giving travelers the chance to explore the nearby Cyclades islands. Also, the small boats that depart from the port will get you to several Folegandros beaches! Some of the best beaches are Agali and Ambeli, which have crystal clear waters and boast a beautiful natural setting.

Folegandros has a few but extremely charming beaches.

Folegandros – What to do?

There are only a few activities in Folegandros apart from swimming and hiking. Especially during spring and autumn when the weather is not too hot visitors enjoy hiking to the secluded beaches of Katergo and Agali. You can choose to go scuba diving or snorkeling in the crystal-clear water around the island of Folegandros. It is a great opportunity to explore the rich life and the beautiful colours in the sea of Folegandros. You can also go on a private boat tour to the most beautiful secluded parts of the island.

Not much is known about the ancient history of Folegandros, only that its inhabitants were Dorians and that it later came under Athenian rule. The island was conquered in 1207 by the Venetian Marco Sanudo and remained under the rule of Venice until 1566, when it was taken by the Ottoman Turks. The Greeks reclaimed it in the 19th century.

The villages of Folegandros

The landscape of Folegandros is varied, including tall cliffs and a large cave. The main town of the island, Chora, is built on the edge of a 200-metre high cliff. The port of Folegandros is the small town of Karavostasis. The village of Ano Meria contains a small but interesting Ecological & Folklore Museum. Among the notable beaches on Folegandros is Katergo, accessible only by boat from Karavostasis.

Chora Folegandros is most picturesque place to stay at. Spend a few days in one of the small hotels or hostels, all built in the traditional Cycladic architecture. Chora Folegandros is made of little whitewashed houses with colourful windows and doors, narrow streets and churches with blue domes. It is quite the perfect choice for a romantic getaway.

The small island of Folegandros has become fashionable, but is still an unspoilt piece of Greece as we used to know it. Due to its simplicity and relaxing atmosphere Folegandros is known as the “Island of Peace”.
Its three small villages are connected by paved roads and the landscape is characterized by the endless series of stonefences (low walls) that have been erected over centuries by the locals in order to create terraces on the sunny slopes for their crops.

In Chora, where no motor vehicles are allowed, you’ll find a unique “centre” of three successive squares with trees, where you can enjoy a cool drink or traditional dishes in a quiet, romantic atmosphere. The whole village is scented by the perfume of lime trees and occasionally by the local bread being baked, which by the way is delicious. Bougainvillea and Hibiscus flowers color the small wooden balconies around the 13th century castle (Kastro).

Folegandros – What to see?

The beautiful whitewashed church of Panagia is the trademark of Folegandros and sits on the top of a hill high above Chora. It offers a nice walk and a magnificent view of Chora and the western coast. From up here you can enjoy the breath-taking view of the Aegean Sea and watch the sunset paint the whole village in gold. The area of Kastro, a small fortress made by the Venetians in 1210, which is like a small village inside Chora, will take you back to the Middle Ages. The village of Ano Merià is spread over cultivated fields and stonewalls and has a traditional “kafeneio” and taverns. It also hosts the Folkloristic Museum of the island, open from 10:00 to 18:00.

The habour of the island, Karavostasi, also with a few shops and restaurants is today hosting several hotels, some of which are the best on Folegandros.

The walls are built of stone and mud, with no plaster on the outside (this was done in order to make it less visible for the pirates). The roofs are built with special soil, seaweed and pressed ceilings with beams and slabs of native trees, the “feides”. The water they were using was just the rainwater that flowed from the roofs into the cistern. To equip the rooms of the folklore museum items are collected by other houses, unique and rare.
Ano Meria, Folegandros, Tel. +30 22860 41069
Open in the period: 1/7 – 15/9 Opening hours: 17.00-20.00.

Despite the name, the lighthouse is not actually in Aspropounta but in the neighbouring area of Kavos Michelou. It was built during 1919-1921 and operating by November 1921. It is located 58 m above sea level and the tower is 11 meters high. The light is visible at a distance of 17 to 20 nautical miles. From September 1986 the operating mechanism is powered by solar energy. The lighthouse can be reached from Livadi or from Ano Meria.

The Cave of Chrysospilia is located on the northeast side of Folegandros and is distinguished for its rich and unique decoration that is developed on a 300 m long path. Special and rare finds are the cavepaints found on the walls of the cave. The majority of the paintings are the names of the ancient cave visitors stamped with an argillaceous material. Often referred to as the name of their companions as well as surname, declaration of their place of origin, as Cretan, Serifios, Naxios. Sometimes these names are of young men who took part in an initiatory ceremony. The few, so far, excavated findings (lamps with erotic scenes, phallus, etc.) are guiding us to understand the assisting in worship – initiatory nature of the cave.

Folegandros is characterized by a dry weather with just a few rainfalls throughout the year. All year round the island of Folegandros is exposed to the strong north winds, they are so strong that all trees are inclined towards south. During winter the winds often are so strong that no ships can approach the port of Folegandros. During spring south winds occur and bring along plenty of fog. During the summer months the north eastern winds have a cooling effect on the island. The best time of the year to visit Folegandros is from April to September. 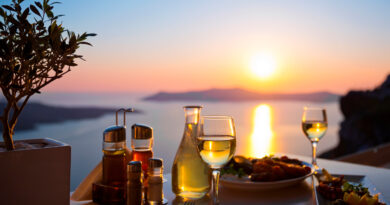 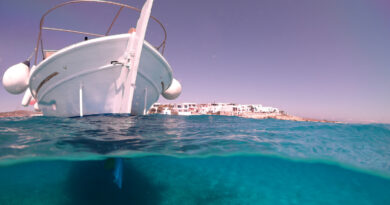 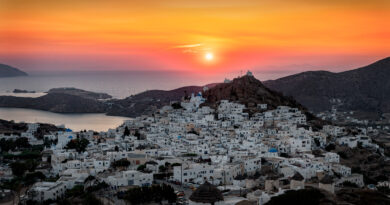