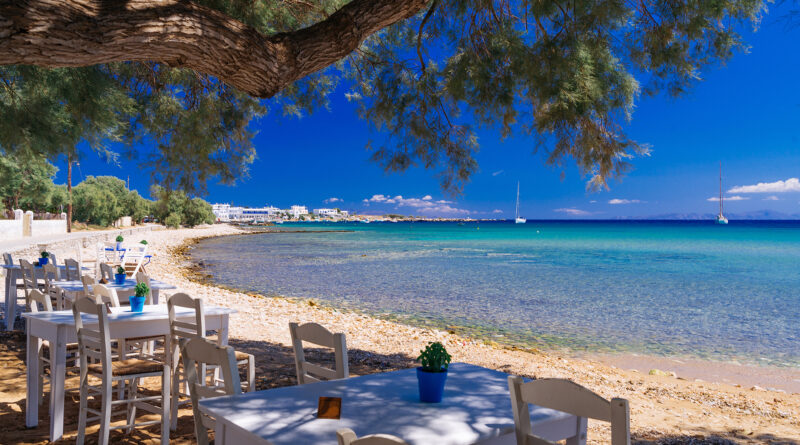 Paros is one of the Cyclades, the most popular Greek island group. From its position in the heart of the Aegean Sea Paros is perfect for island hopping to the nearby famous islands, Santorini, Mykonos, and Naxos. Find all the information you need for your holidays in Paros at this page and discover the Top 10 best things to do in Paros!

Top 10 things to do in Paros

Paros – How to get there?

Does Paros have an Airport?

What is Paros Greece Known for?

Where is Paros Greece?

Parikía – The Capital of Paros

Paros – What to See?

Naoussa and Other Villages in Paros

Windsurfing and Kitesurfing in Paros

Weather and Climate in Paros

Paros is a combination of traditional Cycladic architecture, gorgeous beaches, historical monuments, idyllic villages, and a lively nightlife. The island is rather big which leaves space for any traveller type whether you prefer a relaxing holiday or activities till the early morning. With a beautiful natural landscape, and 120 km of coastline and endless golden beaches Paros is one of the most popular Greek islands.

Top 10 things to do in Paros

Paros – How to get there?

It is extremely easy to get to Paros from both Athens and other islands. Paros has regular and daily connections from Athens by ferry and plane. The island is also well interconnected to the other islands in the Aegean Sea, and during summer Paros receives many direct flights from abroad. There is a regular ferry connection between Paros and the ports near Athens, both Rafina as well as Piraeus. In both cases the trip lasts from four to six hours, depending whether the ferry is high speed or normal.

Does Paros have an airport?

Paros has its own airport – Paros National Airport is connected with Athens, Thessaloniki, and Heraklion Crete. The airport is located 10 km from Parikia.

Among all Cyclades Paros has probably the best ferry connection with other islands in the Aegean Sea, like Mykonos, Santorini, Naxos, Syros, and other. So why not take advantage and go island hopping in the Aegean Sea, having your holidays tailormade with great stays and lots of activities!

What is Paros Greece known for?

Paros is first famous for its beautiful beaches with crystal-clear water and laid-back atmosphere. They are many! Some organized with umbrellas and service on the beach with seaside restaurants and bars while other beaches are secluded. The most famous beach in Paros is Kolymbithres Beach sharing a great resemblance to the beaches in Seychelles with its smouldered granite rocks. The windy beaches on the east coast of Paros are perfect spots for windsurfing and kitesurfing. Pounda Beach is a great party beach. Find a beach guide below.

Where is Paros Greece?

Paros lies to the west of Naxos, from which it is separated by a channel about 8 km wide. Its nearest neighbour is the much smaller island of Antiparos, lying to its southwest. At its narrowest, the channel between the two islands is less than 2 km wide. A car-carrying shuttle-ferry operates all day (to and from Pounda, 3 miles south of Parikia). In addition, a dozen smaller islets surround Paros.

Paros has numerous beaches including Chrissi Akti (Golden Beach) near Drios on the east coast, at Pounda, Logaras, Piso Livadi, Naoussa Bay, Parikia and Agia Irini. The constant strong wind in the strait between Paros and Naxos makes it a favoured windsurfing location.

Nightlife, restaurants, and bars in Paros

Parikia and Naoussa are the two main villages in Paros and where you will find the young crowds every night. The towns are full of traditional taverns, as well as restaurants with an international cuisine and sophisticated bars. If you prefer a quieter atmosphere you can stay or spend your evenings in the tranquil traditional villages of Lefkes and Marpissa. Paros is an island with many faces.

Parikía – the capital of Paros

The capital, Parikía, is situated on a bay on the north-west side of the island, occupying the site of the ancient capital of Paros. Parikía harbour is a major hub for the Aegean islands’ ferries and catamarans, with several departures each day for Piraeus, Heraklion in Crete, and other islands such as Naxos, Ios, Santorini, and Mykonos.

Paros – What to see?

The houses in Parikía town are built in the traditional Cycladic fashion, with flat roofs, whitewashed walls and blue-painted doors, window frames and shutters.  On a rock at the shore are the remains of a medieval castle, built almost entirely of the marble remains of an ancient temple. Traces of antiquity, in the shape of bas-reliefs, inscriptions, columns, etc. are numerous. Close to the modern harbour, the remains of an ancient cemetery have recently been discovered during non-archaeological excavations.

In the main square of Parikia you will find the town’s principal church, the Panagia. Ekatontapiliani, which literally means “church of the hundred doors”. It is incredibly old, some of its features probably predates Christianity. It is said to have been founded by the mother of the Roman Emperor Constantine the Great (ruled 306–337 AD), Saint Helen, during her pilgrimage to the Holy Land. There are two adjoining chapels, one of early form, and a baptistery with a cruciform font.

Parikia town has a small but interesting archaeological museum housing some of the many finds from sites on the island of Paros. The best pieces, however, are in the National Archaeological Museum in Athens. The museum in Paros contains a fragment of the Parian Chronicle, a remarkable chronology of ancient Greece. Inscribed in marble, its entries give time elapsed between key events from the most distant past (1500 BC) down to 264 BC.

Naoussa and other villages in Paros

On the north side of the island you will find the bay of Naoussa, which provides a safe and spacious harbour used also in antiquity. Another good harbour is that of Drios on the south-east side, where the Turkish fleet used to anchor on its annual voyage through the Aegean during the period of Ottoman rule over Paros (1537–1832).

You will find the three villages of Dragoulas, Marmara and Tsipidos on an open plain on the eastern side of Paros. They are rich in remains of antiquity, probably they occupy the site of an ancient town. They are known together as the “villages of Kephalos” after the steep and lofty hill of Kephalos. On this hilltop stands the monastery of Agios Antonios. Around it you will see the ruins of a medieval castle which belonged in the late Middle Ages to the Venetian noble family of the Venieri. They gallantly but vainly defended it against the Turkish admiral Barbarossa in 1537.

Another beautiful village on Paros is Lefkes. It is an inland mountain village 10 km from Parikia. It is picturesque with narrow streets, visiting the island you should take your time and stroll through the narrow streets enjoying the carefully whitewashed houses decorated by colourful flowers.

Throughout history, Paros was known for its fine white marble, which gave rise to the term “Parian” to describe marble or china of similar qualities. Today, you can still see abandoned marble quarries and mines on Paros.

Windsurfing and Kitesurfing in Paros

If you love water sports you will be crazy about Paros. The island has the perfect wind conditions with the “Meltemia” wind blowing during summer.

The island of Paros island is known worldwide for windsurfing and kitesurfing is ranked as a top destination for windsurfing and kitesurfing. Paros, as most of the islands in the Cyclades, offers ideal weather conditions with the blessing of the Meltemi in the summer months (the local Cycladic wind).
For that reasons, Paros was chosen by the Professional Windsurfers Association (PWA) and each year, since 1993, the beach of New Golden Beach welcomes the World Cup attracting thousands of visitors.

When going to Paros you should take the opportunity to explore some of the most spectacular reefs, mysterious caves, and abandoned wrecks around the beautiful island of Paros.

There are several diving centres in various locations on Paros island. You will find three of them at the Golden Beach, two at Pounda port, one in Aliki on the southwestern coast, and two at the beach of Santa Maria on the north-eastern coast of Paros island.

Weather and climate in Paros

The weather in Paros is typical Mediterranean with hot, sunny summers and mild winters. Surrounded by the Aegean Sea it is like the other Cyclades islands very humid during the nights. The “Meltemia”, the strong northern winds blow in Paros, especially from late July until medio August, and since Paros is in the middle of the Aegean Sea the winds are even stronger than in other Cyclades islands. 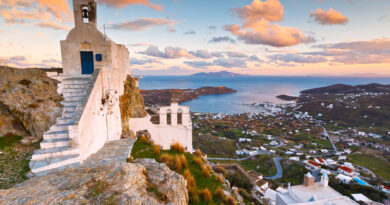 Travel to Serifos – Astonishing, Hidden Gem Off the Beaten Track