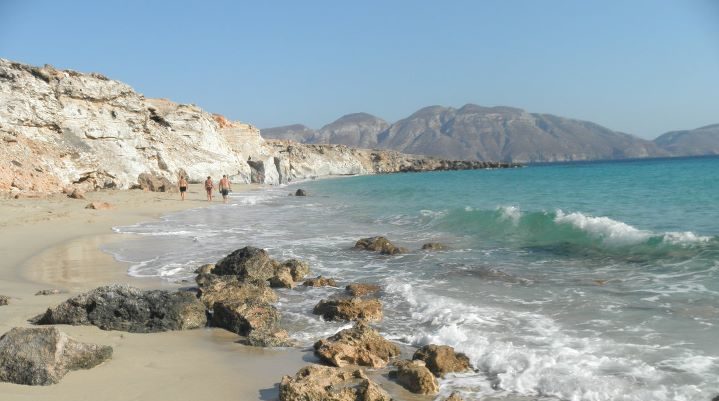 Kasos, the southernmost Dodecanese island, seems to be forgotten by time and the world. During summer it is charming with its wild nature and gorgeous beaches. During winter it is very isolated with severe winds and huge turquoise waves.

Where is Kasos Greece?

How to Reach Kasos?

Things to do in Kasos

Weather and Climate in Kasos

Kasos is the southernmost island belonging to the Dodecanese island group. It lies east of Crete in the Aegean Sea, and is part of the Karpathos region. About a thousand people live here all year round. It is an island of a special beauty offering a great diversity when it comes to beaches, and with a local society that has a vibrant social life with many cultural and sports activities. Kasos does not have the kind of overwhelming tourism you’ll find on other islands, but you will find that Kasos is a friendly place to stay where the people welcome visitors with a warm smile.

Where is Kasos Greece?

Kasos lies southwest of Karpathos, between this island and Crete. Adjacent to the island is the Strait of Kasos, through which some of the Modified Atlantic Water enters the Sea of Crete. Its shape is elliptic and resembles that of Rhodes. The main island has a surface of 49 km2, and it is 17 km long and 6 km wide. It is very mountainous, its highest point being Mount Prionas, which is 550 m high. There is fresh water on the island.

The Municipality of Kasos includes several uninhabited offshore islands, the largest of which are Armathia and Makronisi. Its total land area is 69.464 km². It has five villages, Fry (pronounced like free), Agia Marina, Panagia, Poli, and Arvanitohori. Fry is the capital and habor of the island, Agia Marina is the most populous village. The airport is located close to Fry and is big enough for an ATR 42 to land.

How to reach Kasos?

You can reach the island by ship from Crete and Piraeus. Starting out with a ferry from Piraeus the trip lasts about 17-20 hours (departure 3 times weekly). Arriving from Siteia, Crete the trip lasts 2,5 hours and from Agios Nikolaos, Crete 5 hours (3 times weekly) and finally from Rhodes island about 7 hours duration (3 times weekly). By airplane it is joined with Athens via Crete, Rhodes and Karpathos. A satisfactory road network joins the settlements and allows the visitor to access all the  sights of the island.

In ancient times, Kasos was used as a safe harbor by the Philistines. The first known settlements are Minoan and Mycenaean in origin. According to Homer, Kasos contributed ships toward the Trojan War. It has a very rich and proud history of seamanship and has been an important resource for merchant shipping and pirating. It is still regarded as an island where ship owners can locate a sea savvy crew.

During classical antiquity it closely followed the history of Karpathos. In the middle ages, as Karpathos, it was subjected from 1306 until 1537 to the Venetian Cornaro family, after which Kasos was conquered by the Ottoman Turks.

Kasos during the Greek War of Independence

In 1824, during the Greek War of Independence, Mehmet Ali, the Pasha of Egypt, furious with the Kasiots, dispatched his naval fleet to the island. Kasos had been the first island to declare independence during the Greek Revolution and supported the cause with its fleet of ships. The Egyptian armada burned the entire island and killed most of the population.Given the scale of destruction and the fact that the whole of the island was burned, this tragedy is notable for being the first holocaust of the modern era.

The island’s population recovered as did its economy, still largely based on shipping. The introduction of steam ships made Kasos’ shipyard (which produced wooden sailing ships) redundant and its economy suffered accordingly.

Beginning in the later half of the 19th century, many emigrated from Kasos, initially to Egypt (about 5,000 people), then to Istanbul, mainland Greece, USA and South Africa. By the 1920s, out of about 2,300 houses on the island, only 400 were permanently inhabited.

On May 12, 1912, during the Italo-Turkish War of 1911-12, the island was occupied by the sailors of the Regia Marina ship Regina Elena. With the Treaty of Lausanne of 1923, Kasos joined the other islands of the Dodecanese in the Italian possession of the Isole Italiane dell’Egeo, and was ceded by Italy to Greece with the Paris Peace Treaties of 1947. The island formally joined the Greek State on 7 March 1948 together with the other Dodecanese islands.

The coastline of Kasos is full of beaches. It’s impossible, for any visitor, not to find in Kasos, a beach to fits with his taste. Some abrupt with rocks, ideal for plunges, other with sand for summer sports, other with pebbles, small or big, organized or isolated.

In Emporeios there is an organized beach, with two taverns and a confectionery. On the west coast of Kasos you’ll find the beach of Ammoua, in the region of Antiperatos where you’ll find four solitary beaches with pebbles in all colours.

In the southern part of the island, the best known beach is that of Chelatros with the natural harbour, which in the antiquity was used by Minoan seamen. The beach is always protected from the winds, while in the open sea unique waves are formed, providing a small paradise for all who love windsurfing.

Among the beaches of Kasos there is one of extreme beauty, which is to be found opposite Kasos on the islet of Armathia. Its’ view is an incredible combination of tropic and Cycladic landscape. For a lot of people this is one of the most beautiful beaches of the Mediterranean. The beach on Armathia is accessible only from the sea, by boat, something that gives to the visit, apart from the emotion of beauty, a romantic tone.
Most beaches on the island of Kasos as well as the islet of Armatheia are accessible only by boat and you’ll have to carry your own supplies for the day.

In the mountainous area of Kasos you will find the Ellinokamara Cave. Pottery from various periods was found here including from the Mycenean period. It seems to have been  a place of worship from the Mycenean to the Hellenistic period.

Selai Cave with its impressive stalactites is located in the area of Agia Marina about 2 km southwest of the path. It is 30 m deep and 8 m high.

The Municipal Library in Fry is housed in a beautiful building with columns on its facade. There is also an archaeological collection housed in the old town hall which includes inscriptions, architectural elements, coins, pottery vessels and shells as well as some folklore items. Particularly noteworthy are the inscribed Hellenistic stone slabs in the shape of a disc from the Acropolis at Poli. There is a Folklore Museum in Arvanitohori.

Things to do in Kasos

Many visitors come to Kasos in order to enjoy the crystal clear waters and scuba dive among the great variety of beautiful fishes. People dive into sea, some for pleasure and others for research. In order to scuba dive on Kasos island you must be an experienced diver with your own equipment, since the island has no diving centres.

If you love fishing, Kasos island will offer you another amusing outdoor activity that you surely will enjoy. This is the best experience that you can accomplish on your vacation. Please note there is no organized fishing on the island you can go fishing on private basis only. There are some tavernas/restaurants that will be more than happy to cook your fishes for you.

Another growing water sport is windsurfing (or sail boarding). As long as you are an experienced surfer Kasos can offer you the beauty of it. Please note on the island there are no lessons, equipment from a qualified instructor. Thus, all water sports are on private basis.

Weather and climate in Kasos

Kasos island has a typical Mediterranean climate with hot and dry summers, and mild temperatures during the winter months. The average temperature for Kasos is annually 21°C.

Kasos is notable for its lack of large scale tourism, the quality of its fish, cheeses, and other culinary specialties, and its hospitality toward visitors. 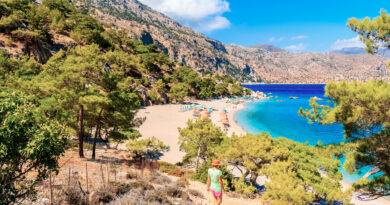 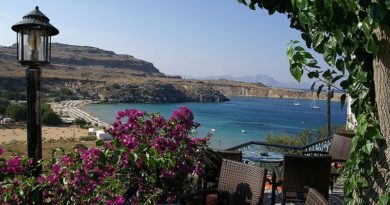 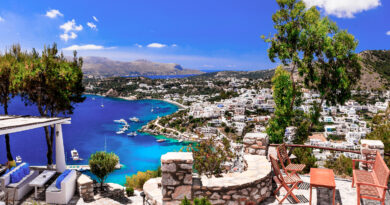 Leros – Stunning Beauty Amidst an Archipelago of Magical Islets