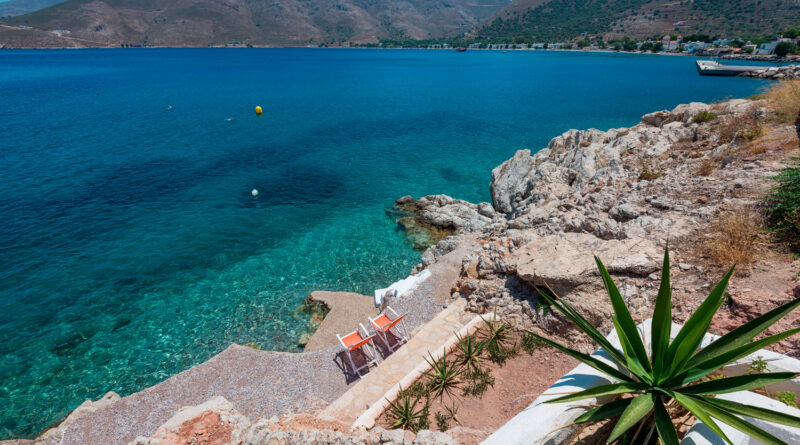 Tilos is characterized by serenity and a rare charm that will make you relax from the first moment. With red golden mountains and wildflowers everywhere, you are heading for a green adventure in an island where you can hike the shepherds’ paths through mountains, valleys, and meadows in your search for wildlife and the many secluded beaches.

Where is Tilos in Greece?

Map of the Dodecanese Archipelago

The Villages of Tilos

What to do in Tilos?

How to reach Tilos?

Weather and Climate in Tilos

Things to See in Tilos

Tilos is a small island belonging to the Dodecanese islands in the Aegean Sea. Due to its remote location and raw natural beauty Tilos is emerging as an alternative travel destination in Greece.

The island of Tilos is blessed with a great diversity in fauna both at sea as well as inland: Sea turtles and monk seals play in the dark blue waters and the mountains are visited by birdwatchers and wildlife lovers from the whole world. Another reason why visitors come back year after year is the warm hospitality of the locals. Tilos is a great destination for alternative holidays; naturists and campers prefer the island.

Where is Tilos in Greece?

Tílos is a small Greek island in the Aegean Sea. It is part of the Dodecanese group of islands, and lies midway between Kos and Rhodes with a population of 533 inhabitants. Along with the uninhabited offshore islets of Antitilos and Gaidaros, it forms the Municipality of Tilos. Tilos is part of Rhodes region.

Map of the Dodecanese archipelago

The villages of Tilos

You will find two villages in Tilos; Livadia (the main port) and Megalo Chorio (meaning ‘big village’). Megalo Chorio sitting on the slopes of a mountain is the capital of Tilos. Livadia is the central port and the place where you will find most of the hotels, apartments, restaurants, and shops on the island. Mikro Chorio (meaning ‘little village’) is a ghost village situated in the middle of the island, waiting to be explored. It was abandoned in the 50’ies when the inhabitants moved to Livadia.

The beaches in Tilos are perfect for swimming. Secluded and non-organized they are ideal for you who seek privacy. They can be accessed on foot or by the local bus.

In Tilos Greece Livadia beach is the only organized beach with umbrellas and sunbeds. You will find it close to the main port of the island. All the other beaches in Tilos are scattered around the coastline, never crowded since the island has still not been discovered by mass tourism. They are peaceful providing excellent relaxation in privacy.

What to do in Tilos?

Tilos is with its many footpaths perfect for hiking, specially combined with birdwatching. Swimming, snorkeling, and diving is a wonderful activity from one of the many secluded beaches around the island. Spend the afternoons relaxing and enjoying the local specialties in the shade of one of the seaside taverns and the evenings with a drink in a lounge bar under the indigo blue sky.

How to reach Tilos?

Tilos island is small and has no airport. The nearest are in Rhodes and Kos islands. Rhodes International Airport “Diagoras” receives domestic flights from Athens, Thessaloniki and during the summer months it receives flights from many European destinations as well.

Alternatively, you can embark the ferry from Athens to Tilos. Ferries are departing from Piraeus port for Tilos approx. 3 times per week. The trip is terribly long, though, lasting around 17 hours. Tilos is connected by ferry with other islands in the Dodecanes archipelago, like Leros, Simi, and Patmos.

Weather and climate in Tilos

In Tilos like the rest of the Dodecanese the weather is typical Mediterranean with hot summers and mild winters. Temperatures during summer may easily reach 40°C but fortunately the afternoon breeze cools it down to about 32-35°C. Sometimes the breeze may become rather strong. Autumn usually starts in mid-October with lower temperatures and during November you will experience rainfall in form of showers. Winters are characterized by strong winds, but rarely colder than 0°C.

Popularly, Telos was the son of Helios and Halia, the sister of the Telchines.

He came to the island in search of herbs to heal his ill mother, and later returned to found a temple to Apollo and Neptune. However, Telos does not appear in Greek mythology and the name probably has an unknown pre-Hellenic origin. Pliny the Elder notes that in antiquity Telos was known as Agathussa. In the Middle Ages, it was known by the Italian as Episcopio, either because it was a Bishop Seat or because its position as Vantage Point.

Pottery and stone tools discovered in Kharkhadió indicate human activity on Tilos in the early Neolithic period 8000 BC – 7000 BC, along with the large assembly of dwarf (1.20-1.60 m tall) elephant bones, carbon dated at 4000 – 7000 BC (some now in the museum). Masseti (2001) suggests coexistence of these animals with humans, possibly into the historic period.

Excavation has identified Pelasgian masonry, as well as suggesting Tilos was successively dominated by Minoans, Mycenaeans and Dorians.

Tilos followed Rhodes into the Byzantine Empire and was a member of the naval Theme of Samos between the 9th and 14th century.

The Knights of Saint John took control of Tilos from 1309, restoring the Byzantine castles, and building new ones in order to defend against pirate raids. It was evacuated in 1470 as the Ottomans began the Siege of Rhodes and control passed to Suleiman I in 1522 when Rhodes fell.

In 1523, Tilos was occupied by the Ottoman Empire, which lasted until May 12, 1912, when Italian sailors landed in the bay of Eristos during the Italo-Turkish War.
Tilos then became part the Italian possession of the Isole Italiane dell’Egeo. After the Italian Armistice of September 8, 1943, Tilos was occupied by German troops, and in 1948 it joined Greece together with all the Dodecanese islands.

Things to see in Tilos

At the north-westside of Tilos, the Monastery of Agios Pandeleimon, (also patron saint of the island), sits on the slopes of Mount Profitis Ilias (654 m). The mountain borders a fertile plain running across the width of the island, with the settlements of Agios Andonis to the north and Eristos to the south. To the north-east of the plain is the capital of Tilos, Megalo Chorio, built in the early 19th century at the foot of the ancient city of Telos. The archaic ruins stretch up to the site of the acropolis of the ancient city, and the Venetian Kastro, built over it. To the west is Kharkhadio Cave, where excavations in 1971 unearthed Neolithic finds and bones of dwarf elephant.

Above the cave stand the ruins of the medieval Fortress of Mesaria. At southern end of the island, bordered by more fertile meadows, is Livadia, the major harbour and economic centre of the island. The island’s old capital, Mikro Chorio, first settled in the 15th century by the Knights of the Order of St John, overlooks the bay. It has been completely abandoned since 1960, its inhabitants having moved down to the harbour in the 1930s. A number of other settlements such as Lethra, Ghera, and Pano Meri have similarly been abandoned. Mount Agios Nikolaos (367 m) stands to the south of the bay.

Castles (Kastros) have protected the island’s inhabitants from pirate raids since the Dark Ages. The castles of the island are: Megalo Chorio, Mesaria, Mikro Chorio, Agrosikia and Stavrou Lambrou.

Greece stands out for its rich natural and cultural heritage. Although geological heritage is a rather new concept, the paleontological excavations in Charkadio Cave, Tilos Island (Dodecanese, Greece), dating back in 1971, have revealed findings belonging to the last European Elephants (Elephas tiliensis), that inhabited Tilos Island 45.000 – 4.000 years ago, thus providing significant scientific information on the palaeoenviroment. 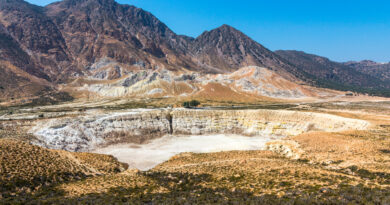 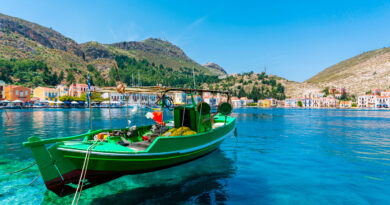 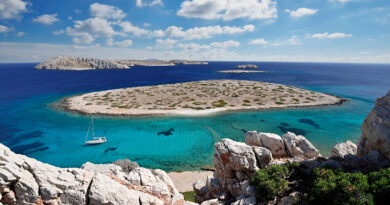