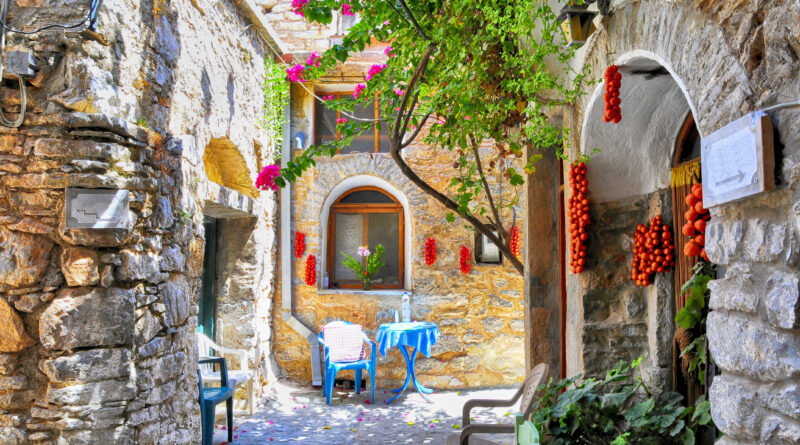 Chios is yet another one of the beautiful Greek islands. You will find it on the Northeastern side of the Aegean Sea quite close to the city of Izmir (Smyrni) in Turkey.

Why to visit Chios?

Chios is first famous for its medieval villages, its unique mastic gum, and its stunning beaches. The traditional villages of Pyrgi and Olympi both have an outstanding architecture and a structure somewhat fortified. Probably, you have never seen the characteristic style of the traditional houses of Chios before anywhere else. Their exterior walls are decorated with black and white geometrical designs, standing in narrow maze-like alleys giving you the urge to explore beyond the next curve or corner of the street.

Top 10 things to do in Chios

Where is Chios island?

Chios Greece is the fifth largest of the Greek islands lying on the eastern side of the Aegean Sea, 7 km off the Turkish coast, separated from Turkey by the Chios Strait. There is a daily ferry that connects Chios island with Cesme, a port near Izmir in Turkey. Except for Izmir, popular destinations for day trips from Chios are the tiny islands of Psara and Oinousses. The island is noted for its strong merchant shipping community and its unique mastic gum production.

Chios – what to see?

If you get really hooked on exploring the mysteries of Chios, the best way is to rent a car and drive around the island. On your road trip you will discover medieval castles, ghost villages, and Byzantine monasteries, like the 11th century monastery of Nea Moni, a UNESCO World Heritage Site, and the monastery of Agia Markella, which also happens to be the protector of Chios.

Apart from Pyrgi and Olympi you will find other traditional villages, like Anavatos, Volissos and Chios Town, all with Medieval castles sitting on the hills above them. The enchanting Chios villages are a must to visit!

If you want to explore further the interesting architecture of Chios, set off to explore the numerous monasteries that are scattered around the island! Besides the monasteries of Agia Moni and Agia Markella you might also want to visit Agios Markos.

Where to hang out in Chios?

Its stunning natural beauty, its cozy little family resorts, and its laid-back atmosphere make Chios a great destination for family holidays. It is famous for its secluded beaches and picturesque seaside villages lined with lovely taverns, where you can indulge in the local delicious dishes. If you feel the urge for a cooling dive in the summer heat, head for Mavra Volia, which is the best beach on Chios, at the southernmost side of the island.

The landscape of Chios island

Chios island is kidney shaped, 50 km from north to south, and 29 km at its widest. The landscape is mountainous, with a ridge of mountains running through the spine of the island. The largest of these, “Pelineon” (1,297 m) and “Epos” (1,188 m), are situated in the north of Chios. The centre of Chios is divided between east and west by a range of smaller peaks, known as “Provatas“.

Chios island has numerous beaches all the way around its coastline. The have beautiful natural surroundings and clean water. Mavra Volia, Emporios, and Karfas are the most famous beaches in Chios, all organized with tourist facilities. If you prefer your own secluded beach, unorganized and quiet, you just drive around the island, and you will find a beach of your choice, perfect for total relaxation and privacy. Chios has around 30 great coves, big or small, with stunning beaches.

On the east coast of Chios, you find the capital of the island, Chios Town with a population of more than 30,000, built around the main harbor of the island and a medieval castle. The current castle, with a perimeter of 1,400 m, was constructed during the time of Venetian and Ottoman rule, although archaeologists have found settlements dating back to 2000 B.C.

Chios – the birthplace of Homer

North of Chios Town lies the large suburb of Vrontados, which lays claim as the birthplace of Homer.  Its connection to the great ancient poet is supported by an archaeological site known traditionally as “Teacher’s Rock“.

Chios – how to get there?

Chios has its own national airport, named “Omiros”, which is receiving domestic flights from Athens, Thessaloniki, Lemnos, Mytilene (Lesvos), Rhodes and Samos all year around. Chios National Airport “Omiros” is located near Kampos village, about 3 km from Chios Town.

You can also choose to reach Chios from Athens by ferry from Piraeus Port. Routes are carried out 3 times per week all year around, and the trip lasts 9 hours. Chios is interconnected with other Greek islands as well, including Mytilene (Lesvos), Mykonos, Samos, Ikaria, and Syros plus the port of Cesme in Turkey. During the summer, the island of Chios has a ferry route to the port of Kavala as well.

Visiting Chios is a great opportunity to go scuba-diving. Most scuba-diving centers in Chios are based in Chios Town, in Karfas and Agia Ermioni. You will also find interesting diving spots from the beaches of Elinda and Trahili on the southern side of the island and at the strait between Chios and the island of Oinousses.

Sailing around Chios and islets

If you really love the sea but is not the diving type, you can choose to sail around the island, exploring the straits and the smaller surrounding islands. Chios Yachting is a company based on the island of Chios, operation mainly in the nearby islands of Psara, Lesvos, Samos, Inousses, and Ikaria. Try a boat trip either assisted or skippered.

During the summer there are two major festivals taking place. So, if you are lucky to be on the island of Chios on July 22nd, you can experience the celebration of Agia Markella, the protector of the island. The festival lasts for 3 days and one of the activities is going on foot from Chios Town to the monastery of Agia Markella, on the northwestern side of Chios island. The largest celebration of the year in all of Greece is one of Virgin Mary on August 15th, and in Chios it is taking place in Pyrgi, in the church of Virgin Mary, placed in the northwestern side of the island.

Other activities on Chios

You can also try some of the Chios workshops and learn cooking the local Greek specialties at a cooking lesson in Chios Town. Prepare dishes based on traditional Greek recipes, under the guidance of a Chef.

You should never leave Chios before having experienced the unique joy of watching a movie under the stars in an open-air cinema.

When to visit Chios?

Weather and climate in Chios

Chios island has like most islands in the Aegean Sea a typical Mediterranean climate with strong winds from north and north-west and the temperatures are mild. Chios is characterized by sunshine all year round with short rainy winters and hot summers with only extraordinarily little rain.

Samos – ruled by legend with stunning beaches and exciting activities 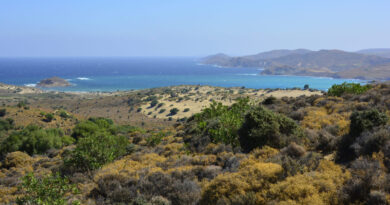 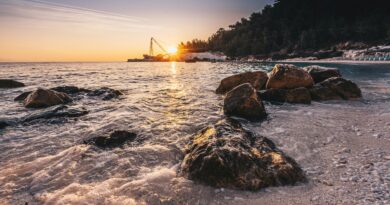