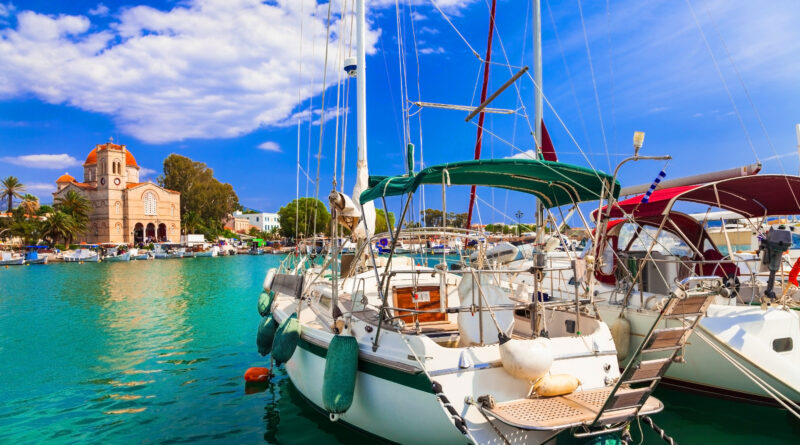 Aegina is yet another Saronic beauty just a quick ferry ride away from Athens, situated near Poros and Agistri. It is one of the most popular islands for quick getaways. With ferries departing from Piraeus port you can arrive in Aegina in less than an hour.

Where is Aegina Greece?

Map of the Saronic Sea

Things to do in Aegina

Aegina – How to Get There?

Weather and Climate in Aegina

The capital of Aegina is called Aegina Town is situated on the western side of the island, in conjunction with the main port. In this cozy little town, you will find many restaurants, traditional taverns, cafes, and shops, first at the lively and colourful seaside. The most popular seaside resort in Aegina is Agia Marina, while Souvala, Vagia, Perdika, and Marathon are more secluded and quieter.

The organized beaches in Aegina are only few, but they are extremely beautiful. Around most of them you will find hotels, seaside taverns as well as beach bars, like at Souvala Beach, Agia Marina Beach, and Marathon Beach. If you prefer the secluded beaches you will find many along the coastline of Aegina.

Where is Aegina Greece?

Aegina is one of the Saronic islands in the Saronic Gulf, 27 km from Athens. Aegina is roughly triangular, approximately 15 km from east to west and 10 km from north to south, with an area of about 87 km2.

Map of the Saronic Sea

In Aegina one of the most popular things to do is sightseeing. The Temple of Athena Aphaia is a must see. Apart from this important temple there are also the Temple of Apollo and the Temple of Ellanios Zeus. Are you into ancient myths? Then Aegina will surprise you!

Things to do in Aegina

Apart from sightseeing, Aegina is perfect for sailing. Maybe you even should take a sailing course in the quiet waters of the Saronic Gulf where the islands lie close to each other and the next port is just a few hours away.

If you really want to wind down and relax you can even do some yoga in Aegina. Go get a session in one of the yoga centers in Aegina.

With many great little shops, Aegina offers anything from souvenirs and clothes to fine jewelry and art galleries. In the port of Aegina Town, you can buy goods straight from little shop-boats in the port where they sell their fish, fresh vegetables, and fruits every morning. Also, in the resorts of Souvala and Agia Marina you can shop souvenirs and accessories.

Swimming from beaches in Aegina

Last, but not least, in Aegina you can always hit for the beach, there are plenty of them and the sea is clean, blue, and crystal-clear.

The organized beaches in Aegina have all kinds of facilities like watersports, hotels and taverns. You can, though, also find more secluded and non-organized beaches along the coastline of Aegina.

Aegina – How to get there?

You can easily get to Aegina from the moment you set feet on the Greek ground. There is no airport on the island, the nearest one is Athens International Airport “Eleftherios Venizelos”. You need to reach Piraeus port and embark on the ferry to Aegina. Ferries depart from Piraeus daily, almost every hour. You can take a cab from the airport or use the subway which goes all the way from the airport to Piraeus port. The boat trip to Aegina lasts from 30 minutes to 1 hour, depending on the vessel.

Weather and climate in Aegina

In the heart of the Saronic Gulf Aegina is quite protected from the strong “Meltemia” winds in the Cyclades islands. The climate is typically Mediterranean with mild winters and hot, dry summers. The most perfect seasons for visiting Aegina is in springtime when the island is covered with a lush vegetation and the temperatures are most pleasant. Autumn is also a great season with sunny days, clear weather, and mild temperatures. Especially sightseeing at the ancient temples is most pleasant during the spring and autumn months.

The northern and western side consist of stony but fertile plains, which are well cultivated and produce luxuriant crops of grain, with some cotton, vines, almonds, olives, and figs, but the most characteristic crop of Aegina today is pistachio. Economically, the sponge fisheries are of notable importance. The southern volcanic part of the island is rugged and mountainous, and largely barren. Its highest rise is the conical Mount Oros (531 m) in the south, and the Panhellenian ridge stretches northward with narrow fertile valleys on either side.

Tradition derives the name from Aegina, the mother of Aeacus, who was born in and ruled the island. During ancient times, Aegina was a rival to Athens, the great sea power of the era.

According to Herodotus, Aegina was a colony of Epidaurus, to which state it was originally subject. Its placement between Attica and the Peloponnese made it a center of trade even earlier, and its earliest inhabitant came from Asia Minor. Minoan ceramics have been found in contexts of about 2000 BC. The discovery of several gold ornaments belonging to the latest period of Mycenaean art suggests the presence of Mycenaean culture in Aegina for some generations after the Dorian conquest of Argos and Lacedaemon. It is probable that the island was not doricized before the 9th century BC. 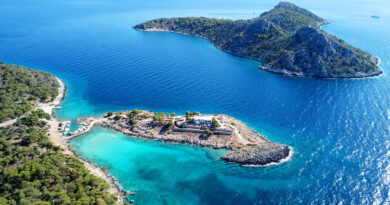 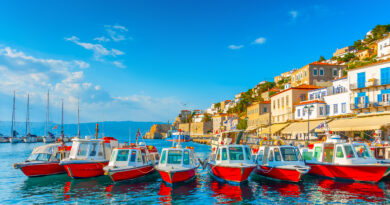 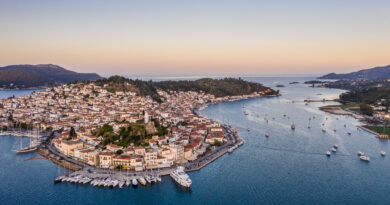 Poros Island and the Beautiful Love Bay in the Saronic Gulf