Evia, the second-largest island in Greece, is a great road trip destination for nature lovers. It is separated from the mainland by the narrow Evripos Channel at Halkida. In Evia the pace slows down as the island consist of hilltop monasteries, hidden bays with stunning beaches, rugged gorges, mountain peaks, small farms, and vineyards.

Euboea (Evia) on a map

How big is Evia island?

Evia – How to get there?

Evia is a real road trip paradise! It has great beaches, awesome mountains, walkable gorges, rivers, and interesting ancient sites scattered around the island. The climate is most pleasant, and the island is home to Aedipsos Spa (with more than 80 hot springs), the stunning Lichadonisia islets, and the famous resort in Pefki, as well as the long sandy beach of Agia Anna. You will find picturesque seaside towns all around the island with traditional restaurants and cozy cafes.

Euboea (Evia) on a map

How big is Evia island?

Evia is the second largest island in Greece, and the third largest in the eastern Mediterranean Sea. It is located just north of Attica prefecture. Being so close to the mainland, it has a mainland feeling to it. It is connected to the mainland by two bridges – a modern, suspended bridge, and an older, sliding one. Evia covers a total surface of 3,580 km2, its coastline has a total length of 48 km and it has 220,000 inhabitants.

Evia – How to get there?

If you arrive by plane in Athens, the best way to reach Evia is by car. Firstly, because the big island is perfect for road trips. You can rent a car in Athens International Airport. Chalkida, the capital of Evia, is approx. 70 km from Athens, and the journey by car takes 45 min. It can also be reached by bus or train, there is also a suburban railway connection. If you travel by car, you must follow the E75 National Road from Athens towards Lamia, follow the road signs for Chalkida and take the first exit to Chalkida. You can use any of the two bridges, the High Bridge, or the old Negroponte retractable bridge.

According to archaeological findings in several areas of Evia (Istiaia, Kirinthos, Psachna, Artaki, Amarynthos, Karystos a.o.) Evia has been inhabited sinde the Paleolithic Era. Especially from the period of copper important findings have been excavated. Ruins dating back to the Early Helladic period as well as the Middle Hellaic period have been found in Evia. Finally, post Hellenic and Mycenaean tombs and ruins have been excavated in many areas of Halkida.
The powerful ancient cities of Evia established important colonies in both Halkidiki, Asia Minor, and Southern Italy, while Eretria during the Classic period was one of the most powerfuld cities. Evia prospered during the Byzantine era, but during the Ottoman occupation, Evia was under Turkish control; it joined the rest of modern Greece after June 13th, 1830. Many refugees from Asia Minor installed themselves in Halkida and Amarynthos after the tragedy in 1922. Having a strong local resistance, Evia was bombarded by the Germans during WW2.

Lihada peninsula – is located on the northwestern side of Evia. It is home to some of the most beautiful beaches in Evia: Yaltra, Gregolimano and Agios Georgios. Greek mythology tells us that this peninsula formed part of Liha’s body. He was killed by Hercules. From his head the Lihadonissia (meaning “islands of Lihada) were created. These green islets, known as the Greek Seychelles, can be reached by ferry from Agios Georgios or from Agios Konstantinos. Also visit Cape Kyneo, the Lighthouse of Vassilina, and go swimming and scuba diving from the beach of Gregolimano. Accommodation: You can choose among one of the elegant hotels in Gregolimano or a traditional guest house by the sea in Yialtra or Agios Georgios.

Orei tourist resort – is in northern Evia and has been inhabited since prehistoric times. Enjoy the picturesque surroundings and the many fish taverns along the coast. Visit the Town Hall of Orei where important archaeological finds are on display, the marble statue of a charging bull (4th century B.C.), and the ruins of the Venetian castle built on top of one of the two citadels of ancient Orei. Neos Pyrgos nearby is a great place with a beautiful street and waterfront and it has a lively nightlife. You can choose to stay in one of the picturesque guest houses in either Orei or Neos Pyrgos.

Drymonas waterfalls and a petrified forest – North of Limni and Rovies resort you will find the famous pilgrimage centre, the Monastery of St. David, the Drymonas waterfalls, and the museum of petrified mammels and the Petrified Forest of Kerasia. Nearby you also find the amazing beaches of agkali, Ahladi and the Gorge of Nileas.

South Evia has a natural environment totally different from that in the north. It is much less forested but boasts an amazing natural terrain with ecosystems rich in flora and gorges, of which the best known is Dimosari Gorge. The landscape is perfect for hiking, especially in the legendary headland called Cavo Doro with its beautiful coastline and sandy beaches hidden in coves and little islets close to the coast.

Styra – is built amphitheatrically over the ruins of the ancient city. Do not miss to see the mysterious megalithic constructions known as Drakospita (meaning houses of dragons). They were given this name because of their enormous size. According to archaeologists these houses were sacred, dedicated to Zeus and Hera, and dating from the 6th to the 2nd century BC.

Marmari port – a quiet vacation resort is connected with the port of Rafina. Marmari is just opposite Petalioi, a private island group of 10 islets, it is also the wind park of Evia.

Castle Rosso, also known as the “red castle” near the picturesque town and port, Karystos.

Just 80 km from Athens, you will find the city of Chalkida, the capital and main gate of Evia. With its strategic geographic position Chalkida has been a crossroad of cultures and ideas for centuries. Today Chalkida is the administrative and commercial centre of the island and the city is built on both sides of Evripos Straits. It is a weekend getaway for many Athenians and thanks to its modern cable bridge, access to the city has never been easier.

Chalkida is quite famous for its tidal phenomenon in Evripos; the swift change of water direction happens every six hours, it is caused by the Moon. At each change of direction, the water stops moving for approx. 8 minutes. The best spot to watch this unique phenomenon is from the sliding bridge of Negroponte. Locals enjoy their waterfront; the charming pedestrian street is lined with elegant cafés and restaurants full of people day and night.

Besides the water sports you can also take advantage of the facilities available and play football, volleyball, basketball, tennis or horseback riding at the city’s equestrian club.

Visit Nea Artaki; Lefkandi; Nea Lampsakos and Drosia if you love seafood or Vathy (in Avlida) for a tour in the archaeological site where the Temple of Artemis stands.

Of all spa-towns in Greece, Edipsos (also Aidipsos) is the most famous. You will find this picturesque little town in northern Evia. You can reach Edipsos by ferry from the Greek mainland, in Arkitsa in Fthiotida, or by car, bus or train from Athens through the Cable Bridge.

Since ancient times, the healing effect of the thermal springs in Aidipsos have been known to man. They were mentioned in scripts by Aristotle, Plutarch, and Strabo. The precious water flowed for the very first time when Hephaestus hit the land with his hammer. At least, so mythology tells. This was a favour to the goddess Athena, who believed that the water from the thermal springs would keep Hercules powerful and healthy.
Emperors and commanders frequented Aedipsos during the Roman times, but also centuries later the springs attracted famous personalities, like Greta Garbo, Maria Kallas, and Winston Churchill. In the town of Edipsos you will see a plethora of neoclassical mansions, and picturesque traditional restaurants and cafés in the shade of lush plane trees. Giving a unique nostalgic feeling to the place. Around Edipsos you will discover archaeological sites, like the Sylla Cave.

In Edipsos you can choose to stay at family run pensions, guesthouses or luxurios hotels and spas.

A miracle rising from Earth

In Edipsos you will find more than 80 springs. The high temperatures combined with the composition of the waters is beneficial for the human body. According to archaeological finds the spot from where the waters flow was discovered already during prehistoric times. In the same area a drawing of a mammal fossil is found. The springs have been known to man for 20.000 years now.
The temperatures of the waters are ranging from 28°C to 86°C. The water is rich in calcium, magnesium, and iron, and their properties are very healing. You will find the springs scattered at different points of the city and at all hydrotherapy centres in the area.

The water from the springs eventually reaches the sea and at certain beaches you will have the opportunity to swim in semi-thermal sea water. Here the springs pop out from the seabed raising the temperature of the water considerably. Combine the beneficial properties of the healing waters with the kinesitherapy of swimming. In Edipsos you will also find mud-baths, hosted in special hydrotherapy centres.

Edipsos is a beautiful old thermal spa town with a modern tourism infrastructure. You will find golden beaches nearby where thermal springs are flowing. The waterfront promenade is full of traditional restaurants, cafes, and bars where you can enjoy refreshments and delicious food.

Eretria, a coastal Evian town is a “gateway” to the island since it can be reached by ferry from Oropos in Attica. It is built in the spot of the ancient city-state by the same name. Ancient Eretria was a dominant maritime, agricultural, and commercial power. It established colonies in the Aegian Sea as well as in southern Italy.

It was destroyed twice, first by the Persians and second by the Romans. It was later abandoned until 1827, when refugees from Psara island settled here. For a period, the town was named Nea Psara. Eretria is located 23 km southeast of Chalkida.

Karystos, a picturesque town and port, is known since ancient times for its famous Karystos slabs, slate rocks of the area. Karystos is located 124 km southeast of Chalkida.

Limni Evias is a small, beautiful coastal town with an architecture reminding us of a village in one of the Greek islands. It is located 80 km northwest of Chalkida.

Kymi town on the east coast of Evia, is also called the “balcony to the Aegean Sea” because of its spectacular view. It is also one of the biggest artificial ports in Greece with a direct ferry connection to Skyros. Kymi is located 87 km northeast of Chalkida. The local architectural tradition includes some neoclassical residences with details such as elaborate railing patterns on the balconies, brackets, and owner inscriptions.

The northern part is green with dense pine forests that end at the seashore, mountain villages and towns with a marked Cycladic ambiance to the south, numerous beaches with crystal-clear waters facing the Aegean Sea or Evoikos Gulf 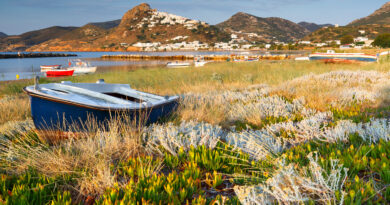 Skyros – Secluded, Stunning, and Serene in the Sporades Archipelago 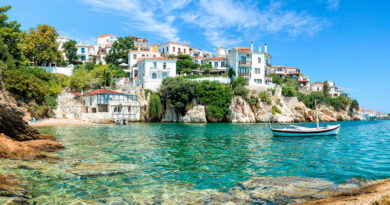 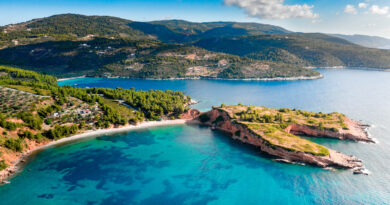