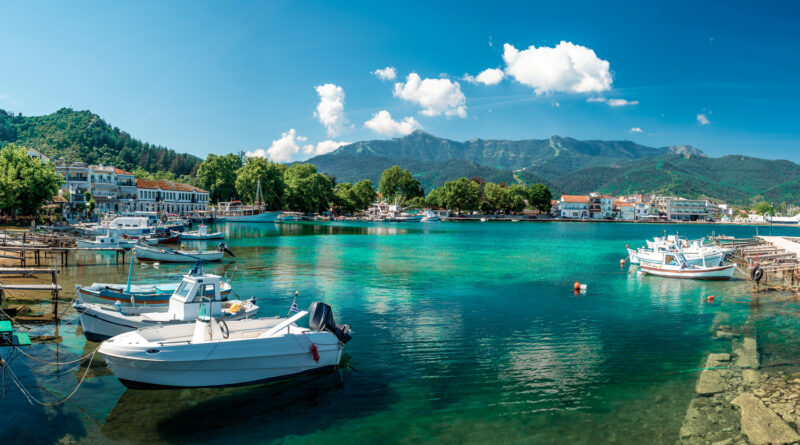 Thassos is a green beauty in the Aegean Sea. Tucked away in the northernmost part of the Aegean Sea the island is unknown to most travelers but loved and appreciated by Greeks. Surrounded by lush greenery and crystal-clear sea the beaches are of unique beauty. Off the beaten track Thassos will give you a relaxing holiday on great beaches and hiking adventures to waterfalls and impressive gorges. Thassos is one of the most beautiful Greek islands and a great destination for family holidays and total relaxation in nature ❤

Top 10 Things to do in Thassos

Where is Thassos Island?

How to get around Thassos?

What does the Name Thassos Mean?

The two top-features of Thassos in Greece are the beaches and the villages in the mountains. The traditional architecture with houses built in stone, roofs with grey tiles and lined up in narrow paved streets.

Top 10 things to do in Thassos

In Thassos you will find organized beaches with umbrellas, sunbeds, and water sports facilities, as well as beaches unspoiled and private. Some of the best beaches are Paradise, Makriammos, Golden Beach Thassos, Alyki, Metalia, and Livadi. Relax under the sun and dive into the crystal-clear waters at these beaches, and when you feel hungry for local delicacies you can spend an hour or two at the seaside taverns.
Just another perfect day at the beach!

Where is Thassos island?

Thasos or Thassos is a Greek island in the northern Aegean Sea, close to the coast of Thrace and the plain of the river Nestos but geographically part of Macedonia. It is the northernmost Greek island, and 12th largest by area. Thasos is also the name of the largest town of the island (also known as Limenas Thasou, “Harbour of Thasos”), situated at the northern side, opposite the mainland and about 10 km (6 mi) from Keramoti.

Thassos is the northernmost island of Greece, situated close to the Greek mainland and the region of Macedonia. The island of Thassos is connected by ferryboats from Kavala and Keramoti, where the routes are regular on a daily basis almost every hour. The ferryboat from Kavala reaches the port of Limenas, whereas the ferry from Keramoti stop at the port of Skala Prinou. Tickets are to be purchased in the ports before boarding the ship. Thassos has no airport – the nearest one is in Kavala. Kavala Airport “Alexander the Great” has regular flights from Athens all year. Flight duration approx. 1 hour. During the summer months the airport has direct flights from many European countries as well. Upon arrival at the airport (30 km from Kavala) there is a bus connection to the center of Kavala, or you can hire a taxi for your transfer to the port of Kavala.

Thassos is perfect for trekking and hiking with many hiking trails crisscrossing the island, leading you to old castles, abandoned settlements, traditional hillside villages and mysterious caves. Explore the Ancient Agora above Limenas and the old Monastery of Archangel Michael and get to know the history of the island.

Over the last years diving has developed into an organized activity on the island of Thassos and you will find several diving centers located around the more touristic places on the island. They organize courses and diving trips to nearby reefs and old shipwrecks.

Hiking in Thassos is a popular activity. Many old footpaths leading to the villages in the mountains is crossing the whole island. On the trails you will discover Medieval towers, secluded beaches, waterfalls, and caves. Get into your best hiking boots and conquer Mount Ypsarion, the highest point on Thassos with 1,045 meters above sea level. It is beautiful with countless varieties of plants and flowers, a true haven for beekeepers. At local stores you can buy delicacies such as honey, courgettes and prunes in honey. Trekking up the mountain you will enjoy the stunning views of the landscape and the Aegean Sea.

How to get around the island of Thassos?

Is hiking not your thing? Then hiring a car or moped for a day to get around the island is a great idea. Thassos has a road all the way around the island along the coast with side roads (dirt roads) leading you to the villages in the mountains.

Located in the northern part of Greece, close to Macedonia, Thassos has a colder climate the most other Greek islands. Winters are characterized by humidity with low temperatures. From April and forward temperatures start rising again and spring is sunny and mild. Even though summers are hot temperatures do not rise as much as in the Cyclades islands.

The history of Thassos

Lying close to the coast of Eastern Macedonia, Thasos was inhabited from the Palaeolithic period onwards, but the earliest settlement to have been explored in detail is that at Limenaria where Middle and Late Neolithic remains have been found that relate closely to those of the Drama Plain. In contrast, the remains of the Early Bronze Age on the island align it with the culture that developed in the Cyclades and Sporades to the south in the Aegean. At Skala Sotiros for example, a small settlement was encircled by a strongly built defensive wall. Even earlier activity is demonstrated by the presence of large pieces of ‘megalithic’ anthropomorphic stelai built into these walls, which, so far, have no parallels in the Aegean area.

There is then a gap in the archaeological record until the end of the Bronze Age c 1100 BC, when the first burials took place at the large cemetery of Kastri in the interior of the island. Here built tombs covered with small mound of earth were typical until the end of the Iron Age. In the earliest tombs were a small number of locally imitated Mycenaean pottery vessels, but the majority of the hand-made pottery with incised decoration reflects connections eastwards with Thrace and beyond.

What does the name Thassos mean?

The island was colonized at an early date by Phoenicians, attracted probably by its gold mines; they founded a temple to the god Melqart, whom the Greeks identified as “Tyrian Heracles“, and whose cult was merged with Heracles in the course of the island’s Hellenization. The temple still existed in the time of Herodotus. An eponymous Thasos, son of Phoenix (or of Agenor, as Pausanias reported) was said to have been the leader of the Phoenicians, and to have given his name to the island.

Mining activities for base and precious metals started in the 7th century B.C. with the Phoenicians, followed in the 4th century by the Greeks and then the Romans. The mining was both open – pit and underground, and concentrated on the numerous karst hosted calamine deposits for lead and silver although there was also minor exploitation of gold and copper. Worth mentioning is the discovery of a paleolithic addit located at Tzines iron mine, whose age has being estimated at approximately 15.000 years old, (Kovkouli et al. 1988) for the exploitation of limonitic ochre. 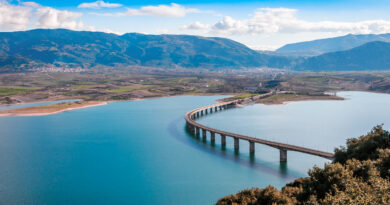 Kozani, the Homeland of Krokos Kozanis, the Red Gold 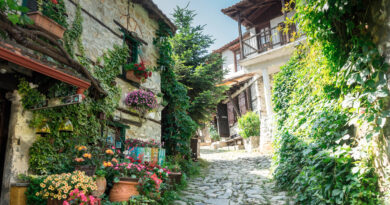