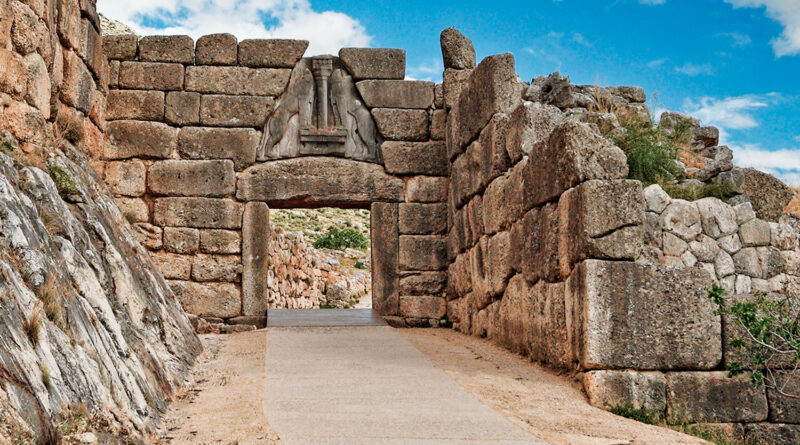 Mycenae is one of the world-famous archaeological sites in Greece. You will find it in the region of Argolida, between Nafplio and Argos. Being an extremely prosperous town in the ancient years it gave its name to a whole civilization, the Mycenaean civilization which flourished around 1,600 to 1,000 B.C.

Where is Mycenae located in Greece?

Mycenae is an archaeological site in Greece, located about 90 km south-west of Athens, in the north-eastern Peloponnese. Argos is 11 km to the south; Corinth, 48 km to the north. From the hill on which the palace was located one can see across the Argolid to the Saronic Gulf. You will find it a few kilometers from the modern village of Mikines.

Mycenae on a map of Argolida

When was Mycenae important?

Map of Mycenae in Ancient Greece

Why is Mycenae so famous?

Much of the Mycenaean religion survived into classical Greece in their pantheon of Greek deities, but it is not known to what extent Greek religious belief is Mycenean, nor how much is a product of the Greek Dark Ages or later. Through the oral tradition Homer transferred the beliefs during the Dark-Ages, but he kept in memory the confederacy of the Greeks under the powerful king of Mycenae, when gods walked along friendly with men, and the “heroic-age” when great heroes dominated the scene. The belief in gods as embodiments of power, the heroic outlook inherited from a distant past together with the local chthonic cults, were later fitted into the frame of the city-states and his demands into an elastic system.

Classical Greek myths assert that Mycenae was founded by Perseus, grandson of king Acrisius of Argos, son of Acrisius’ daughter, Danaë. Having killed his grandfather by accident, Perseus could not, or would not, inherit the throne of Argos. Instead he arranged an exchange of realms with his cousin, Megapenthes, and became king of Tiryns, Megapenthes taking Argos. From there he founded Mycenae and ruled the kingdoms jointly from Mycenae.

HALF DAY TOUR FROM NAFPLIO

The first excavations at Mycenae were carried out by the Greek archaeologist Kyriakos Pittakis in 1841. He found and restored the Lion Gate. In 1874 Heinrich Schliemann arrived at the site and undertook a complete excavation. Schliemann believed in the historical truth of the Homeric stories and interpreted the site accordingly. He found the ancient shaft graves with their royal skeletons and spectacular grave goods. Upon discovering a human skull beneath a gold death mask in one of the tombs, he declared: “I have gazed upon the face of Agamemnon”.

Since then scientific excavations have taken place at Mycenae, mainly by Greek archaeologists but also by the British School at Athens. The acropolis was excavated in 1902, and the surrounding hills have been methodically investigated by subsequent excavations.

Currently the Athens Archaeological Society is excavating the Mycenae Lower Town, with support from Dickinson College and the Institute for Aegean Prehistory.

There is no airport near Mycenae, the closest one is the international airport of Athens, Eleftherios Venizelos, which receives flights from the whole world all year. The best way to reach Nafplio is by car or bus.

Visit Mycenae by car: You can rent a car in Athens and drive through the Greek National Road to Corinth. After the canal in Corinth, you will have to follow the signs for Mycenae. The total distance from Athens to Nafplio is about 130 km.

Visit Mycenae by bus: The public KTEL buses link Mycenae with Athens, Nafplio and Patra and nearly every other important spot or sight in all Argolida, like Epidaurus, Argos, Porto Heli, and Kranidi.

Going to see ancient Mycenae is a great opportunity to also visit some other great sights in Argolida like Epidaurus, Argos, and Tirys. The best places to stay is in picturesque Nafplio, the first capital of modern Greece or at the stunning tourist resort Tolo.

Find info about Nafplio and Tolo