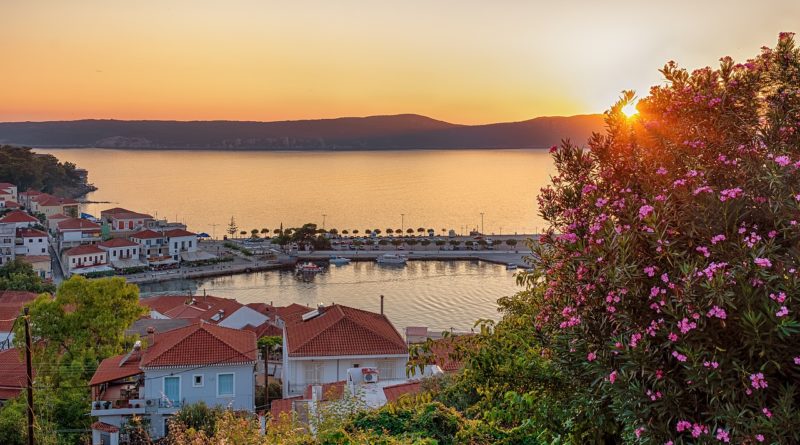 Pylos, historically known under its Italian name Navarino, is a town in Messenia, Peloponnese, Greece.

Pylos is an important archaeological site. Bronze Age Pylos was first excavated in 1952, the site located at modern Ano Englianos some 9 km north-east of the bay. The remains of a large Mycenean palace were excavated there, the so-called “Palace of Nestor”, after the Homeric ruler Nestor, who ruled over “Sandy Pylos” in the Iliad. The site of Pylos was abandoned sometime after the 8th century BCE—it was apparently unknown in the Classical Period. The site is on the hill of Epano Englianos, situated close to the road 4 kilometres south of Chora and 17 kilometres north of Pylos. The Palace is at the top of the hill at 150 metres above sea level and in an area of 170 metres by 90 metres.

Old Pylos and New Pylos are distinct settlements and castles, several kilometers apart. Old Pylos (Navarino Vecchio) is located on the northwest of the bay, while New Pylos is located in the southeast.

The bay of Pylos

The bay of Pylos was the site of two naval battles: The Battle of Pylos, in 425 BC during the Peloponnesian War and the Battle of Navarino, in 1827 during the Greek War of Independence.
The bay of Pylos is formed by a deep indenture in the Morea, shut in by a long island, anciently called Sphacteria, famous for the defeat and capture of the Spartans, in the Battle of Pylos during the Peloponnesian War, and still showing the ruins of walls which perhaps formed their last refuge. This island has been divided into three or four separate sections by the violence of the waves, and boats could pass from the open sea into the port, in calm weather, using the channels so formed.

Old Pylos castle is a 13th-century fortress near Pylos. It is one of two castles guarding the strategic bay on which it sits; the other is New Pylos castle. The old Navarino castle is locally simply called Palaiokastro (“old castle”). The castle sits atop an imposing 200-m rock formation on the northern edge of the bay, flanked by sheer cliffs; the naturally defensible site has probably been occupied since classical times.
The Cave of King Nestor, the ancient King of Pylos, who according to legend, used this cave as a haven for his cattle. From the Voïdhokiliá dunes a path ascends to the cave and then more steeply up to the castle. This is an impressive bat cave with a hole in the roof which is whimsically identified as the grotto where, according to the Odyssey, Nestor and Neleusa kept their cows, and in which Hermes hid Apollo’s cattle.
It might also be that all this is Homer’s imagination, since this area is reckoned by archaeologists to have been the harbour of King Nestor in the Mycenean-era. Fauna: A 1.5 kilometre long sandy beach, signposted “Golden Beach” but known as Divari (meaning “hatchery”) to local people, starts at Gialova and continues west to Old Navarino castle (Palaiokastro). The beach is actually a narrow bar separating the sea waters of the Bay from the brackish waters of Gialova Lagoon, a Natura 2000 site of major importance. It is the only location in Europe where the African chameleon is found. Immediately to the north of Old Navarino castle is the beach of Voidokilia.

Birdwatching: The Gialova wetland is a regional wonder of nature. It is one of 10 major lagoons in Greece and has been classified as one of the important bird areas in Europe. It has also been listed as a 1500-acre archaeological site, lying between Gialova and the bay of Voidokilia. With a depth, at its deepest point, of no more than four meters, it is the southernmost stopover of birds migrating from the Balkans to Africa, giving shelter to no fewer than two hundred and twenty-five bird species, among them heron, cormorant, the lesser kestrel, Audouin’s, gull, flamingo, osprey,the imperial eagle, and other aquatic species. Boat trips: Boat tour around the area of Sphacteria. Boattrips are offered in the harbour of Pylos. The boattrips bring you to the lighthouse at the entrance of the bay of Navarino or Sphacteria. 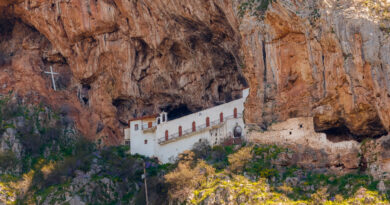 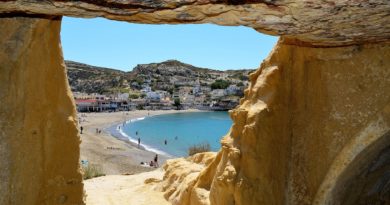 Travel to Matala and ancient Phaistos 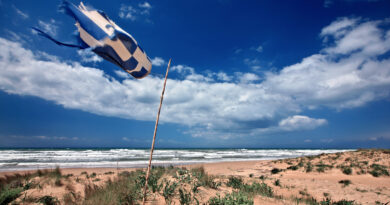