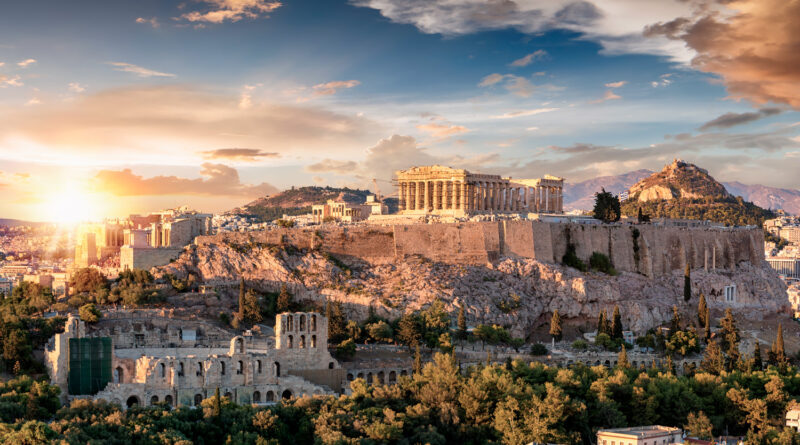 Visiting Athens for the first time, even if just for a few hours, you must pay a visit to Acropolis, the Sacred Rock. Both Acropolis and Parthenon, the greatest temple on the rock, dedicated to the goddess Athena, are visible from about  every every neighborhood of Athens.

Acropolis of Athens – the best known in the world

The Acropolis of Athens or Citadel of Athens is the best known acropolis (Gr. akros,  edge, extremity + polis, city) in the world. Although there are many other acropoleis (plur) in Greece, the significance of the Acropolis of Athens is such that it is commonly known as The Acropolis without qualification. The Acropolis was formally proclaimed as the preeminent monument on the European Cultural Heritage list of monuments on 26 March 2007. The Acropolis is a flat-topped rock that rises 150 m (490 ft) above sea level in the city of Athens, with a surface area of about 3 hectares. It was also known as Cecropia, after the legendary serpent-man, Cecrops, the first Athenian king. Follow the links below to each temple or other monument for further reading:

South of the platform that forms the top of the Acropolis there are also the remains of an outdoor theatre called Theatre of Dionysus. A few hundred metres away, there is the now partially reconstructed Theatre of Herodes Atticus.

All the valuable ancient artifacts are situated in the Acropolis Museum, which resides on the southern slope of the same rock, 280 m from the Parthenon.

The Athens New Acropolis Museum is an archaeological museum focused on the findings of the archaeological site of the Acropolis of Athens. The museum was built to house every artifact found on the rock and on its feet, from the Greek Bronze Age to Roman and Byzantine Greece. It also lies on the archaeological site of Makrygianni and the ruins of a part of Roman and early Byzantine Athens. The museum was founded in 2003, while the Organisation of the Museum was established in 2008. It opened to the public on June 21, 2009. Nearly 4,000 objects are exhibited over an area of 14,000 m2.

Try to avoid the tourism rush hours and go early in the morning or late afternoon. During summer, the opening hours are 8:00 – 20:00 – Last entrance to the site at 19:40. Tickets cost €20 and are valid for the archaeological site of the Acropolis and its slopes. You need to buy a separate ticket for the Acropolis Museum.
Acropolis is closed to the public at: January 1st , March 25th , May 1st , Easter Sunday, December 25th , December 26th

Beware the guidelines for a visit

Today drastic precautions are being taken to save the temples and the statues from the decay following the air pollution in Athens. Therefore, the interiors of the temples are prohibited access, the statues are kept inside the museum and replicas are placed outside. Aeroplanes are not allowed to fly in the aerial space above Acropolis, and guards are watching all visitors closely. It is strictly forbidden to pick up even the smallest stone from the Sacred Rock.

TICKTES, ACTIVITIES & THINGS TO DO