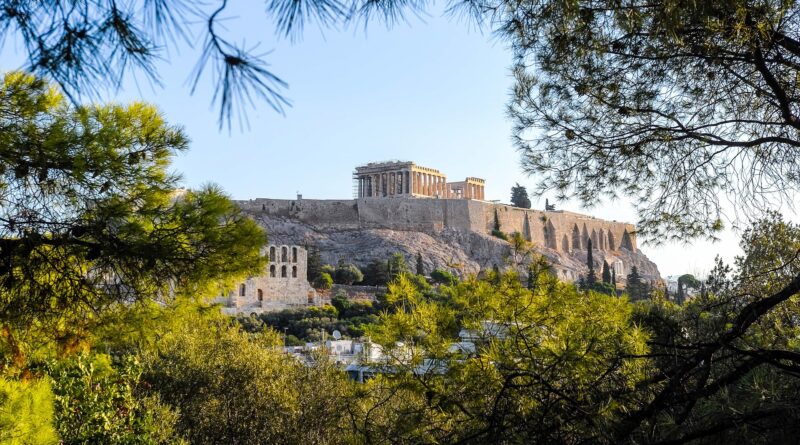 Despite the latest years of economic crisis and poverty, Athens is today breathing with a creative energy that shows it’s face in art shows, political debates and the graffiti on streetwalls – expressing strong opinions about the contemporary state of Greece and the world.

Top 10 Things to do in Athens

Athens is the capital and largest city of Greece. Athens dominates the Attica periphery and is one of the world’s oldest cities, as its recorded history spans around 3,400 years. Classical Athens was a powerful city-state.
A centre for the arts, learning and philosophy, home of Plato’s Academy and Aristotle’s Lyceum, it is widely referred to as the cradle of Western civilization and the birthplace of democracy, largely due to the impact of its cultural and political achievements during the 5th and 4th centuries BC on the rest of the then known European continent.

Today a cosmopolitan metropolis, modern Athens is central to economic, financial, industrial, political and cultural life in Greece and it is rated as an Beta+ world city. The Greek capital has a population of 655,780 within its administrative limits and a land area of 39 km2 (15 sq mi). According to Eurostat, the Athens Larger Urban Zone (LUZ) is the 7th most populous LUZ in the European Union (the 4th most populous capital city of the EU) with a population of 4,013,368 (in 2004).

The heritage of the classical era is still evident in the city, represented by a number of ancient monuments and works of art, the most famous of all being the Parthenon, widely considered a key landmark of early Western civilization. The city also retains a vast variety of Roman and Byzantine monuments, as well as a smaller number of remaining Ottoman monuments projecting the city’s long history across the centuries. Athens is home to two UNESCO World Heritage Sites, the Acropolis of Athens and the medieval Daphni Monastery.

Landmarks of the modern era, dating back to the establishment of Athens as the capital of the independent Greek state in 1833, include the Hellenic Parliament (19th century) and the Athens Trilogy consisting of the National Library of Greece, the Athens University and the Academy of Athens. Athens was the host city of the first modern-day Olympic Games in 1896, and 108 years later it welcomed home the 2004 Summer Olympics. Athens has been a popular destination for travelers since antiquity. Over the past decade, the city’s infrastructure and social amenities have improved, in part due to its successful bid to stage the 2004 Olympic Games. The Greek Government, aided by the EU, has funded major infrastructure projects such as the state-of-the-art Eleftherios Venizelos International Airport, the expansion of the Athens Metro system, and the new Attiki Odos Motorway.

Plaka – Neighborhood of the Gods

Pláka is the old historical neighborhood of Athens, clustered around the northern and eastern slopes of the Acropolis, and incorporating labyrinthine streets and neoclassical architecture. Plaka is built on top of the residential areas of the ancient town of Athens. It is known as the “Neighbourhood of the Gods” due to its proximity to the Acropolis and its many archaeological sites. Plaka was developed mostly around the ruins of Ancient Agora of Athens in an area that has been continuously inhabited since antiquity.

Plaka is on the northeast slope of Acropolis, between Syntagma and Monastiraki square. Adrianou Street (running north and south) is the largest and most central street in Plaka and divides it into two areas: the upper level, – Ano Plaka – located right under the Acropolis and the lower level – Kato Plaka – situated between Syntagma and Monastiraki.
Plaka is visited by hundreds of thousands of tourists around the year, and is under strict zoning and conservation regulations. Motor vehicles are not allowed in Plaka, and most streets are too narrow, thus not being able to accommodate them anyway. It remains a traditionally prime tourist destination with a number of picturesque tavernas, live performances and street salesmen. Nearby Monastiraki, for its part, is well known for its string of small shops and markets, as well as its crowded flea market and tavernas specialising in souvlaki. Another district notably famous for its student-crammed, stylish cafés is Thission, lying just west of Monastiraki. Thission is home to the ancient Temple of Hephaestus, standing atop a small hill.

Museums in Plaka include the new Jewish Museum of Greece, the Museum of Greek Folk Art, an annex of which is the Old Public Baths building, the Frissiras Museum, the Museum of Popular Music Instruments, the Museum of Pavlos and Alexandra Kanellopoulou and the Athens University Museum. Excavations have proven that Adrianou Street is the oldest street in Athens still in continuous use with exactly the same layout since antiquity.

Monastiraki (literally little monastery) is a flea market neighborhood in the old town of Athens, and is one of the principal shopping districts in Athens. The area is home to clothing boutiques, souvenir shops, and specialty stores, and is a major tourist attraction in Athens and Attica for bargain shopping. The area is named after Monastiraki Square, which in turn is named for the Pantánassa church monastery that is located within the square. The main streets of this area are Pandrossou Street and Adrianou Street. The Monastiraki Metro Station, located on the square, serves both Line 1 and Line 3 of the Athens Metro.

Metaxourgeio is located north of the historical center of Athens, between Kolonos to the east and Kerameikos to the west, and north of Gazi. After a long period of abandonment in the late 20th century, the area is acquiring a reputation as an artistic and fashionable neighborhood due to the opening of many art galleries, museums, and trendy restaurants and cafes.

Gazi is a neighborhood of Athens. It surrounds the old Athens gasworks, which is currently an industrial museum and exhibition space, widely known as Gazi, next to Keramikos and close to the Acropolis.
In the past ten years it has been growing rapidly as the new, and currently expanding, Athens gay village. Formerly gay bars were located in Kolonaki and at the beginning of Syngrou avenue. Gazi is now home to numerous gay and lesbian bars, clubs, cafeterias and restaurants.
Kerameikos metro station which belongs to Line 3 of the Athens Metro is adjacent to the Technopolis of Gazi.

Technopolis (Gazi) is an industrial museum and a major cultural venue of the City of Athens, in the neighborhood of Gazi, next to Keramikos and very close to the Acropolis. It is dedicated to the memory of the great Greek composer Manos Hatzidakis, which is why it is also known as “Gazi Technopolis Manos Hatzidakis”. It is in operation since 1999 and is situated in the city’s former gasworks that was founded in 1857, occupying an area of about 30.000 m2. Numerous exhibitions, seminars, music concerts and other cultural activities take place in the grounds.
Technopolis – Gazi (official site)

Psiri  is a gentrified neighbourhood in Athens, Greece, today known for its restaurants, bars, live music tavernas, and small number of hotels.
Until the early 1990s, Psiri was still considered a dangerous area to visit by some, but it has now become one of the most fashionable and trendy choices in the centre of Athens for accommodation, entertainment and food hospitality.
The plateia of Psiri is also called “plateia of Heroes” after the names of the streets leading to it. In the era of the ‘old Athens’ (namely, during the last quarter of the 19th century), the nickname “plateia of Heroes” was a derisive reference to koutsavakides, who at the time used it as their resort.

What to see in Athens?

Athens is home to the National Archeological Museum, featuring the world’s largest collection of ancient Greek antiquities, as well as the new Acropolis Museum,  first opened in 2009, and replacing the old museum on the Acropolis. The new museum has proved considerably popular; almost one million people visited during the summer period June–October 2009 alone (further information about museums).

Athens is home to 148 theatrical stages, more than any other city in the world, including the famous ancient Odeon of Herodes Atticus, home to the Athens Festival, which runs from May to October each year. In addition to a large number of multiplexes, Athens plays host to a variety of romantic, open air garden cinemas. The city also supports a vast number of music venues, including the Athens Concert Hall (Megaron Moussikis), which attracts world-famous artists all year round. The Athens Planetarium, located in Andrea Syngrou Avenue is one of the largest and best equipped digital planetaria in the world.

By the late 1970s, the pollution of Athens had become so destructive that according to the then Greek Minister of Culture, Constantine Trypanis, “…the carved details on the five the caryatids of the Erechtheum had seriously degenerated, while the face of the horseman on the Parthenon’s west side was all but obliterated.” A series of strict measures taken by the authorities of the city throughout the 1990s resulted in the improvement of air quality; the appearance of smog (or nefos as the Athenians used to call it) has become less common. Widespread measures taken by the Greek authorities throughout the 1990s have improved the quality of air over the Attica Basin. Nevertheless, air pollution still remains an issue for Athens, particularly during the hottest summer days.
The major waste management efforts undertaken in the last decade (particularly the plant built on the small island of Psytalia) have improved water quality in the Saronic Gulf, and the coastal waters of Athens are now accessible again to swimmers.

How to get around in Athens?

Since the construction of Athens Metro (also known as Attica Metro) in the 1990’s  Athens has a sufficient infrastructure when combined with the electric railway and the surburban rail (station at International Airport).

During the construction of the metro tunnels, numerous artefacts of archaeological interest were discovered. Teams of archaeologists worked ahead of, then alongside, engineers for a total of 6 years. They protected and recorded the archaeological evidence that was uncovered which included ancient streets, houses, cemeteries, sanctuaries, public workshops, foundry pits, kilns, aqueducts, wells, cisterns, drains and sewage tunnels. This allowed a new insight into the topography of the city in ancient times. Never before has such a rapid development of infrastructure been accompanied hand-in-hand with the attentive study and preservation of archaeological data.

Exhibitions of ancient artefacts and/or their replicas can be found at various metro stations, such as those of Monastiraki and Syntagma.