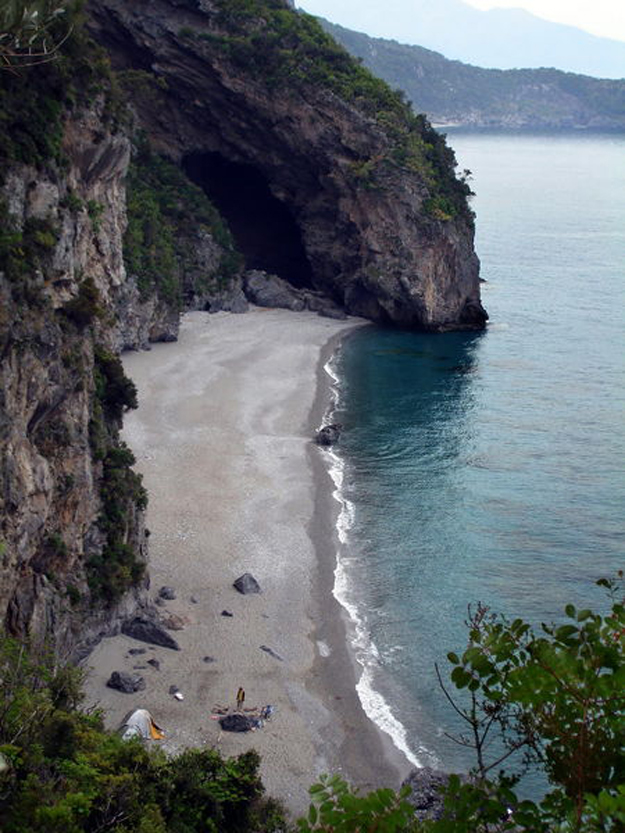 Euboea is the second largest Greek island in area and population, after Crete. The narrow Euripus Strait separates it from Boeotia in mainland Greece. In general outline it is a long and narrow, seahorse-shaped island; it is about 150 kilometres (93 mi) long, and varies in breadth from 50 kilometres (31 mi) to 6 kilometres (3.7 mi). Its general direction is from northwest to southeast, and it is traversed throughout its length by a mountain range, which forms part of the chain that bounds Thessaly on the east, and is continued south of Euboea in the lofty islands of Andros, Tinos and Mykonos. Euboea is linked to the mainland by two bridges, one that runs through Chalkis and is also accessible from Thebes, and another which bypasses Chalcis and is accessed from Athens, you can therefore easily reach it by car. It is beautifully mountainous in all its length with decent roads.
It is well suited for sailing as well – many of its beaches can only be reached from sea by boat. Chalcis or Chalkida, the chief town of the island of Euboea, is situated on the strait of the Evripos at its narrowest point. The name is preserved from antiquity and is derived from the Greek χαλκός (copper, bronze), though there is no trace of any mines in the area. In the late Middle Ages, it was known as Negropont (Italian: Negroponte, “black bridge”), a name that was applied to the entire island of Euboea as well. The earliest recorded mention of Chalcis is in the Iliad (2.537), where it is mentioned in the same line as its rival Eretria. It is also documented that the ships set for the Trojan War gathered at Avlis, the south bank of the strait nearby the city. Chamber tombs at Trypa and Vromousa dated to the Mycenaean period were excavated by Papvasileion in 1910. In the 8th and 7th centuries BC, colonists from Chalcis founded thirty townships on the peninsula of Chalcidice, and several important cities in Sicily. Its mineral produce, metal-work, purple and pottery not only found markets among these settlements, but were distributed over the Mediterranean in the ships of Corinth and Samos. (Further reading…) Erétria (literally “city of the rowers”) was a polis in Ancient Greece, located on the western coast of Euboea, south of Chalcis, facing the coast of Attica across the narrow Euboean Gulf. Eretria was an important Greek polis in the 6th/5th century BC. However, it lost its importance already in antiquity. Excavations of the ancient city began in the 1890s and have been conducted since 1964 by the Greek Archaeological Service (11th Ephorate of Antiquities) and the Swiss School of Archaeology in Greece (ESAG). Today, there is a modern Greek town of the same name on the ancient site.

The oldest archaeological finds date the foundation of the city to the 9th century BC. It was probably founded as the harbour of Lefkandi, which is located 15 km to the west. .The name comes from the Greek erétēs, rower, and the verb, eréssein/eréttein, to row, which makes Eretria the “City of the Rowers”. Eretria’s population and importance increased at the same time as Lefkandi began to decline in importance from c. 825 BC onwards. The natural superiority of Eretria’s harbour and the importance of trade to the Euboeans is one explanation for this gradual population migration from Lefkandi to Eretria. (Further reading…) Aidipsos is a former municipality in Euboea, Greece. Since the 2011 local government reform it is part of the municipality Istiaia-Aidipsos, of which it is a municipal unit. 80 of Greece’s 752 hot springs are located in Aidipsos, making it a popular tourist destination.The spas date back more than 20,000 years. The 2001 population was 6,670. Karystos  is a small coastal town on the island of Euboea. It has about 7,000 inhabitants. It lies 129 km south of Chalkis. From Athens it is accessible by ferry via Marmari from the Rafina port. Its urban plan was laid out by the renowned Bavarian civil engineer Bierbach, in the middle of the 19th century, near the site of the ancient city of Carystus. • The reconstructed Venetian fortress of Bourtzi, built in the 13th century on the eastern beach of the town.
• The ruins of the Venetian castle named Castello Rosso built in 1030 and ancient marble quarries, both at the nearby hamlet of Myloi.
• The town hall, built at the end of the 19th century.
• A small museum hosted by the Yokaleion Cultural Centre, featuring collections of Hellenistic and Roman era sculptures and pottery.
• The Orthodox monasteries of Taxiarches, St. George and St. Mavra.
• The mountain area of Mt. Ochi.
• Cape Cavo-Doro. Avlonari is a town in the eastern part of the island of Euboea. It was the seat of the municipality of Avlon. Its 2001 population was 761 for the village and 1,539 for the community. Avlonari is located about 15 km northeast of Aliveri and 20 km south of Kymi.

Avlonari is built on a hilly setting, farmlands dominate the eastern portion and are made up of cattle, corn, fruits, vegetables, olive groves and other crops, a small plain is east of Avlonari, Its houses can be seen from the hilltop. The forests dominates the remainder of the area and are made up of pine and spruce trees and willow trees by the village, a mountain range surrounds the area. Farmlands are in the lower areas. Inside the villages features great architecture in several houses, it has narrow and a few cobblestone streets. It is connected with a road connecting the GR-44 (Thiva – Chalkida – Eretria – Karystos) and Kymi, Greece.

Health Tourism: Euboea (Evia) boasts dozens of hot springs. One of the best is the facility at Aidipsos (also called Edipsos). This spa is unique in that the hot springs are located under sea water, allowing visitors to actually swim surrounded by the swirling warm water. Both Plutarch and Aristotle wrote about Aidipsos, and archeological evidence suggests that it has been in use for at least 20,000 years. This long history is reflected in the dozens of hotels, pensions, and other tourist and health-seeker facilities which fill this pleasant, hospitable town. Edipsos provides detailed scientific information on the composition of its healing waters. This spa site is also delightful because of the abundant beaches and interesting historic and archeological monuments located nearby.