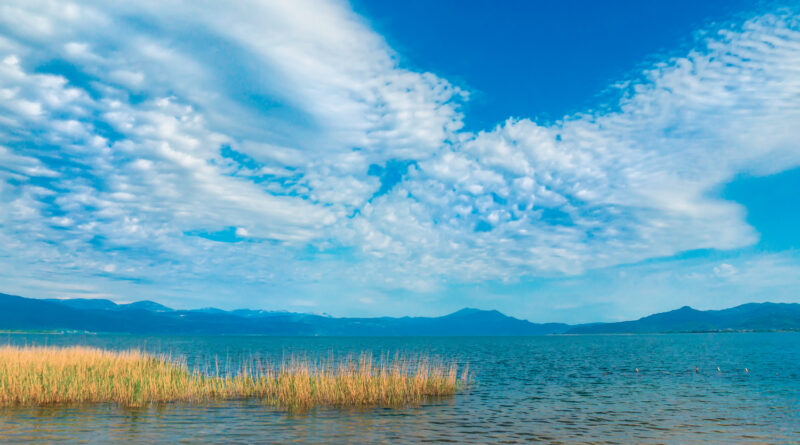 The vast forested landscapes of Central Greece offer great adventures in nature for exploring mountains, gorges and wetlands. Lake Trichonida, the largest natural lake in Greece has a rich fauna in and around the lake. Staying in one of the nearby towns like Nafpaktos, Messolongi or Agrinio you can go birdwatching or fishing at the lake.

Lake Trichonida is located in the eastern part of the Aitoloakarnania prefecture, in the east of Agrinio, south of Evrytania and northwest of Nafpaktos. It covers an area of 98.6 km2 with a maximum length of 19 km and maximum depth of 58 metres.

One million years ago the lake was large enough to cover the central part of Aitoloakarnania, a part that is now a plain. The lake later dried up and today is located in the east-central portion of the prefecture. The municipalities with shores on the lake are Thermo, Makryneia, Arakynthos, Thestieis, and Paravola.

Around the lake, there are beautiful forests with maples, pines and other trees. The lake and its environs is home to more than 140 bird species. There is also farmland and various villages surrounding the area.
The flora of lake comprehends plane-trees, willows, proplar-trees, water-lilies, orchids, rushes and banks are overgrown with reeds. The lake is rich in phytoplankton about 90 types of them and seeweeds as well. A great number of fish species live here, such as tsouroukla, dromitsa, smelt, eel, lourogovios, trichonovelonitsa, nonovios, saliara and others. The caught fishes exceed 350 tones annually. The poultry-fauna is just as significant. Over of 140 types birds, 30 of them are protected, such as waterduck, heron, woodcock, waterhen, kingfisher. You will also find a great variety of reptiles and insects in the habitat. With its huge fauna Lake Trichonida is under protection of Natura 2000, as is it one of the most clear lakes in Greece.

Info about birdwatching around Lake Trichonida

Trichonida, with an area of 97 km2, was once referred to as the “Sea of Aetolia” in old property contracts. In the morning mist, the summits of Arakynthos and Panaitoliko figure in the hazy background. In the old days, about 300 fishermen’s families lived off the lake. Now they are down to just four or five. It’s not the fish stocks that have dwindled but the buyers. The lake is home to 25 species of fish, 16 of which are edible and 11 are indigenous to Greece. The tastiest is the tiny sand smelt — normally a saltwater fish – which has adapted to the lake and even graces the tables of Athenian tavernas.