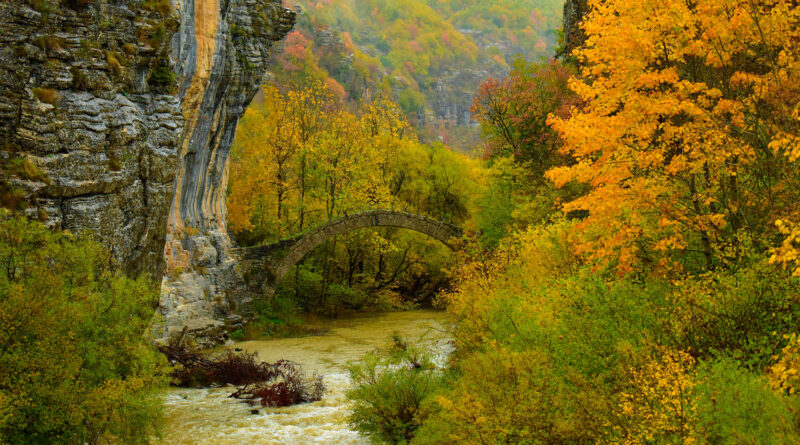 Epirus is a region in southeastern Europe, shared between Greece amd Albania. It lies between the Pindus Mountains and the Ionian Sea, stretching from the Bay of Vlorë in the north to the Ambracian Gulf in the south. It is currently divided between the periphery of Epirus in northwestern Greece and the counties in southern Albania. The largest city in Epirus is Ioannina, seat of the periphery of Epirus.

Mountains, rivers, gorges, and villages to visit in Epirus

Acheron River is known worldwide from the ancient Greek mythology as one of five rivers in the Greek underworld of the dead. The springs of Acheron River, located at the border between Thesprotia and Preveza, near the village of Glyki is an area of incredible beauty.

In the mountains of Epirus in northwestern Greece you will find Dodona. It was an oracle devoted to a Mother Goddess, identified at other sites with Rhea or Gaia, but here called Dione, and later devoted to the Greek god Zeus.

Ioannina is the beautiful capital of Epirus. In the city centre you will find the lake Pamvoti, set in a landscape of old trees with a small ferry taking tours to a tiny islet in the middle of the lake. Enjoy interesting museums about Greece under Ottoman rule before you head for adventures in the mountains and the gorges.

Konitsa is undoubtedly one of the most beautiful border areas not only in Epirus but in all of Greece. It is built on the slope of Mt. Trapezitsa in an altitude of 630 m. Aoos river and gorge, Voidomatis iver, Mt. Smolikas, Grammos and River Sarantaporos are unique natural beauties in the area around Konitsa.

The mountainous town of Metsovo will capture you with its spectacular colours and its unique views. Built in an altitude of 1200 m in a stunning green landscape, it is exactly on the spot where North and South Pindos are separated.

At a summit height of 2,637 m above sea level Mount Smolikas is the second tallest mountain in Greece, after Mount Olympos, and the highest of the Pindus Mountains. The mountain is formed in ophiolite rocks.

Tzoumerka is a paradise on Earth combining everything and offering you a unique experience, no matter what you seek, full of traditional villages surrounded by gorges, canyons and steep mountains.

Parga is the most popular holiday destination in Epirus with luxurious resorts and great traditional taverns. If you in for adventures, Parga is a perfect base for excursions into the wild mountains, deep gorges and exciting rivers of Epirus.

On one side Preveza touches the deep, restless and dangerous waters of the Ionian Sea and on the other the quiet, shallow waters of the Ambracian Gulf, full of rare examples of living species.
Preveza is a retreat with cobbled streets and a distinctive charm.

Arachthos River is 100 km long starting from Mt. Lakmos in northern Pindos, crossing Ioannina prefecture going down the plain of Arta it collects forces with Louros River to form a double delte in the Bay of Amvrakikos. The river is named after the king of Argos, Inachos.

Vikos – Aoös National Park is part of the Natura 2000 ecological network and one of UNESCO Geoparks. It spans an elevation range from 550 to 2,497 meters. Here over 100,000 people take part in activities including rafting, canoe-kayaking, hiking and mountain biking each year.

“Zagori – the land behind the mountain” hides 46 traditional villages on mountain slopes and in valleys. 50 km northwest of Ioannina at the border to the great Vikos Gorge, it is the second-deepest in the world, only passed by Grand Canyon in the US.

Geology of Epirus and the Pindus Mountains

Epirus is largely made up of the Pindus Mountains, a series of parallel limestone ridges that are a continuation of the Dinaric Alps. The Pindus mountains form the spine of mainland Greece and separate Epirus from Macedonia and Thessaly to the east. The ridges of the Pindus are parallel to the sea and generally steep. Altitude increases as one moves east, away from the coast, reaching a maximum of 2637m at Mount Smolikas, the highest point in Epirus. Most of Epirus lies on the windward side of the Pindus, and the prevailing winds from the Ionian Sea make the region the rainiest in mainland Greece.

Rivers, lakes, and lowlands in Epirus

Significant lowlands are to be found only near the coast, in the southwest near Arta and Preveza, in the Acheron plain, and between Igoumenitsa and Sagiada, and also near Saranda. The Zagori area is a scenic upland plateau surrounded by mountain on all sides.

The main river flowing through Epirus is the Aoos, which flows in a northwesterly direction from the Pindus mountains in Greece to its mouth north of the Bay of Vlorë in Albania. Other important rivers include the Acheron river, famous for its religious significance in ancient Greece and site of the Necromanteion, the Arachthos river, crossed by the historic Bridge of Arta, the Louros, the Thyamis or Kalamas, and the Voidomatis, a tributary of the Aoos flowing through the Vikos Gorge. The Vikos Gorge, one of the deepest in the world, forms the centerpiece of the Vikos-Aoos National Park, known for its scenic beauty. The only significant lake in Epirus is Lake Pamvotis, on whose shores lies the city of Ioannina, the region’s largest and traditionally most important city.

The climate of Epirus is Mediterranean along the coast and alpine in the interior. Epirus is heavily forested, mainly by coniferous species. The fauna in Epirus is especially rich and features species such as bears, wolves, foxes, deer and lynxes.
Read more about Epirus at Wikipedia

Find all my posts about Epirus here