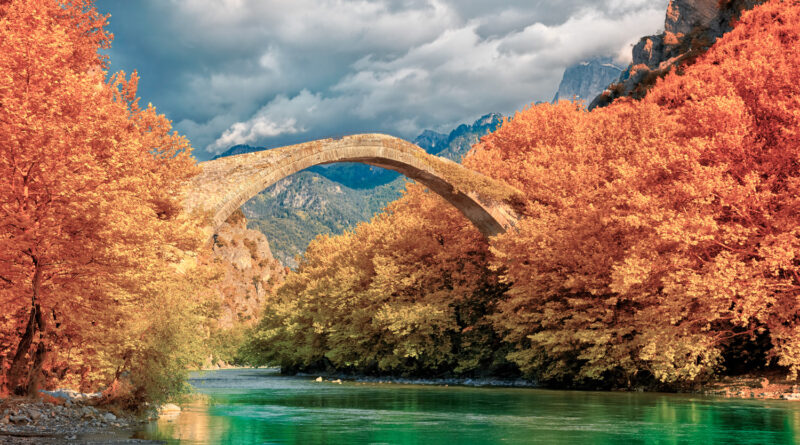 Konitsa is a town in Epirus, Greece, near the Albanian border. It lies in a shape like an amphi-theatre on a mountain slope of the Pindos mountain range, overlooking the valley where the two rivers Aoos and Voidomatis meet. The valley is used for farming. Konitsa is a regional centre for many small Pindos villages, and there are shops, schools and a hospital. It is a good starting point for tourists who want to explore the Pindos mountains, or who want to go rafting in the river Aoos or parapenting. Konitsa is undoubtedly one of the most beautiful border areas not only in Epirus but in Greece all together. It is built on the slope of Trapezitsa mountain in 630 m altitude. There are many assumptions about the origin of its name. The most dominant ones are the stance of the historian P. Aravantinos who claims that it comes from the name of the ancient city Knossos that gradually became Konitsa, as well as the stance that it comes
from the Slavic word Konitza, which means “horse bazaar”.

Konitsa is a town of 4.000 inhabitants built according to the traditional style of Epirotic architecture. You will admire the stone buildings, the old mansions that hold from the period of the Turkish domination, the churches and the monasteries that are a true ornament for the area, the cobbled streets, the traditional stone bridges and the countless cultural monuments.
Aoos River that flows on the right side of the city and puts its own indelible mark in the area completes the scenery. It is an area that includes some of the most beautiful mountains and rivers in Epirus. Aoos Gorge, Voidomatis River, Mountain Smolikas and Grammos and River Sarantaporos are unique and unfamiliar spectacles that undoubtly will capture you.

In antiquity, the area of Konitsa was part of the territory of the Greek tribe of the Molossians.
In 15th century Konitsa came under Ottoman rule and became part of the Sanjak of Ioannina. (Read more about the history of Konitsa…)

The bridges of Epirus

Not only in Κonitsa, but also in some of the surrounding villages, we find several traditional stone bridges. Most of them are in very good condition bringing images to mind from an era long gone. An era when they were an integral part of people’s lives, for their transportations, their agrarian work and their communication with the surrounding areas.

Visiting Konitsa it is an absolute must to attempt a descent in one of the rivers by rafting or kayak.
Route 1: The first descent begins from the most photographed part of Zagori. This is not any other but the bridge of Papigo, 1 kilometer from Aristi on the way to Papigo. You will follow a green route in Voidomatis gorge and the route finishes in the bridge of Klidonia.  The descent can also be done by kayak, monoraft or inflatable boat. The length of the route is 5 km and the duration of the adventure is about 1,5 hour. Previous experience is not necessary as the water is not impetuous.
Route 2: The second descent addresses people who love this sport and have excellent knowledge and experience. The route begins from Vovousa and finishes in Vrisohori. It is a route whose main characteristic is the big degree of difficulty and the big length of the descent, that is about 27 kilometres (more info and routes…)

Skiing in the area of Konitsa

For the lovers of wintry sports there is the ski resort of Vasilitsa. It is situated in the borders of Ioannina and Grevena prefectures with its bigger part being in Grevena prefecture. It is a modern ski center with 18 tracks and total length of 19.50 km. In the winter months the center is always open as the spot in which it is found always has a satisfactory quantity of snow. The altitude reaches 2000 meters and you will find restaurants, bars, chalet and mountain lodges there.

The first route begins from Konitsa and leads to the monastery of Stomio. It is a route of 5 km, very popular in Konitsa because of the captative landscapes you meet. You begin from the stone bridge of Konitsa in an altitude of 440 m following the old path up to the monastery, which is on the top of a vertical rock above the river. The length of the route is 5 km and those who will do it in a good mood will reach their destination in 1,5 hour. On this route, where you can hike throughout the year, you will meet beautiful rivers with abundant water.
The second route begins from Aetomilitsa in an altitude of 1.500 meters and it leads to Epano Arena. You begin from the village of Aetomilitsa and you follow an eastern course going upwards all the time. You will wander in dense forests of beech, you will pass by alpine fields and you will see a lot of alpine lakes in an altitude higher than 2000 meters . It is an awsome route you definitely never will forget! The duration of the walk is only about 2.5 hours. (more routes…)

All the lovers of the sport must a least once visit Konitsa in order to fly and enjoy the unique landscape. Konitsa has a specifically shaped track on the hill of Prophet Elias. You can get there by any kind of car since the road is set in asphalt. The landing takes place in the area of Anagnostopoulios School and the hypsometric difference is 500 meters. If you want to attempt it but it is your first time, you can address the parapente schools of theoretical and practical practice and at least enjoy a flight as a fellow-passenger in a tandem flight!

Museum of Natural History and Folklore
It is situated in Konitsa and includes an enormous variety of species from the flora and the fauna of Epirus. You will admire the wild and rare animals of the region as well as innumerable kinds of trees and plants. You will also have the chance to see abundant folklore material, traditional costumes and articles of daily life, as well as martial exhibits from the two world wars of 1913 and 1940.
Opening hours: Every day from 09:30 to 12:30

Photo Exhibition of Κonitsa
The rich photo exhibition of Konitsa and the wider region is accommodated in the restored building of the Muslim Seminary, which was built around 1869-70. Its founder was Sheik Zourampis. It includes an enormous collection of photographs from all the remarkable historical monuments and the prehistoric findings of the region, as well as the natural landscapes that surround the town.
Opening hours: 8:00 to 14:00 from Tuesday until Saturday and 10:00 to 14:00 on Sundays and holidays. Closed on Monday. Εntrance ticket: Free of charge

Environmental Εducational Park in Bourazani
This unique park is situated in the village Bourazani that is only 12 km away from Konitsa. It was founded in 1974 in an area of 120 hectares that was formed so as to accommodate a lot of rare species of wild animals. About 850 deer, roebucks, wild bears, wild sheep, kri-kri and a lot of other animals live in this splendid space. Those of you who will visit it will have the chance to watch conducted touring for the life of the animals and their environment and enjoy the beautiful nature. Opening hours: With appointment. Εntrance fee.

Μuseum of Craftsmen in Pyrsogianni
This museum is situated in the village Pyrsogianni that is about 30 km away from Konitsa. It is accommodated in the building of the old school that has been characterized as a Historical Preservable Monument. The residents of Pyrsogianni are particularly famous for their important art, which you will have the chance to see for yourselves in the museum of craftsmen. You will learn about the history and the art of the region’s craftsmen and will observe tools, objects of daily use, as well as samples of architecture carved in stone.