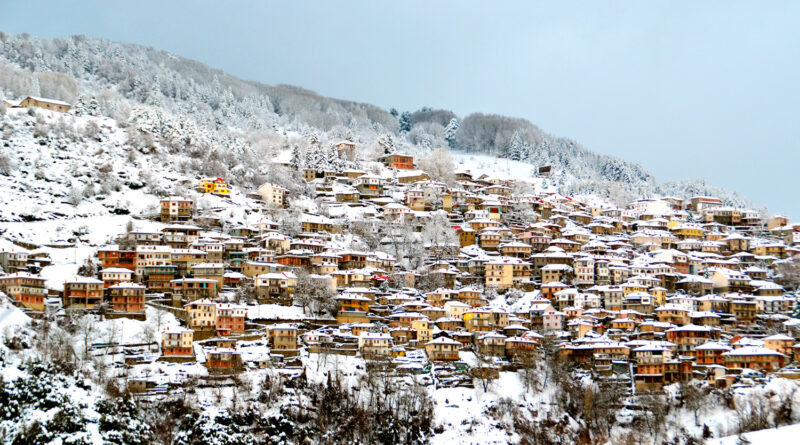 Mountainous Metsovo will capture you with its spectacular colours and unique views. It is built on a mountain slope in an altitude of 1200 m in the middle of an impressive green landscape, exactly where North and South Pindos are separated.

Many towns claim the title of the most picturesque settlement in Greece, but this title might belong to Metsovo. Despite the radical growth of tourism in the latest years, Metsovo has not lost its traditional charme. It combines the past and the present harmoniously and it is an ideal shelter not only in winter when you probably will see it in snow and enjoy winter sports, but in all seasons of the year.

Where is Metsovo Greece?

Metsovo is a town in the mountains of Pindus in northern Greece, between Ioannina to the north and Meteora to the south.

What is Metsovo Greece known for?

Metsovo is famous for its local cheeses (Metsovone and Metsovela) and winemaking industries, including the Katogi-vineyard of the Averoff family. Metsovo is also a popular winter vacation destination and a ski resort. The Metsovo Ski Centre is situated not far from Metsovo town.

Finally, there are several areas around Metsovo, each of which has something special to offer. You can visit Anthochori, which has an open air museum of water-driven movement, Chrisovitsa with Panagia Monastery and its famous potatoes, the villages Anilio and Votonosi, as well as the traditional settlement of Milia on the borders of the national forest.

How to reach Metsovo?

Epirus has two airports. One is in Ioannina and the other in Preveza/Aktion. The airport in Ioannina receives domestic flights from Athens. Aktion/Preveza airport is working during the summer months receiving charter flights from abroad.

Igoumenitsa is the largest port of Epirus, receiving ferries from Italy daily. It also serves ferries the islands of Corfu and Paxi.

Metsovo – things to do

Kayaking in river Metsovitikos
The descent in river Metsovitikos is for people who love this sport and have perfect knowledge and experience. The route begins from the bridge on the way to Megalo Peristeri and finishes at the bridge on the way to Mikri Gotista. This route is characterised by the great degree of difficulty, mainly in the beginning of the route where the river is narrow, and the great length of the descent is about 15 km. At certain points the degree of difficulty reaches 5 while towards the end of the route, the river gets wider and the descent becomes relaxed. The duration of the route is about 3 hours and can be done only with kayak or monoraft. Concluding, we should say that excellent fitness and perfect knowledge of all the techniques of descent are necessary, as well as proportional experience in rivers of difficulty 4th and 5th degree.

Snowmobile at plateau Politses
The most appropriate route for you to enjoy a ride with a snowmobile is the plateau Politses, a few kilometers above Μetsovo on the highway to Τrikala, provided of course that the landscape is covered in snow. You will find tour operaters that will provide you the right equipment, as well as the snowmobiles. A guide will come along showing you the way and save you from unpleasant adventures.

Mountainbiking around the lake of Aoos
The most ideal route for you to enjoy mountain-biking is perimetrically of the artificial lake of Aoos’ springs. It is a  route no longer than 30 km and it is right next to the lake. There is only little traffic on the road, whereas the fun of the sport surely will go off the asphalt road among the fields and in the hills.

Skiing near Metsovo
There are two ski centers operating in the region of Metsovo at the time being. The first one is in the barrow “Karakoli” right outside Metsovo. The old ski center operates there, which has two tracks of 1.000 and 1.200 meters length in 1.350 until 1.520 m altitudes respectively. It is open and waits for you in January and February. If you do not have your own uniforms and equipment, do not worry! You will find to rent there, as you will also find food or drinks, depending on what you want. The ski center is also reached via a double cable car of 800 m length.

The second ski center operates at the plateau of “Politses”. It is a complete ski center with 6 tracks of descent of 700 until 1.000 meters length in 1.430 until 1.620 meters altitude. It also has a track of bumpy way of 7 km length for the most experienced and risky. It is open from December until March and it provides you not only with complete equipment and clothing, but also with a school for ski for beginners. The ski center is served by 3 lifts and also serves great food.

Horseback riding in the forests near Metsovo
Those of you who want to make your trip to Ioannina unique should do nothing more than try a ride in the dense forests of Metsovo with a horse. The most ideal route for you to enjoy a ride with the horse is the plateau Politses and perimetrically of the artificial lake of Aoos’ springs. You will go through streams that all lead to the lake, go into dense forests, pass by bridges and end up to the dam of DΕI. The best seasons are summer and spring, as snow melts and there is plenty of water everywhere.

Hiking and trekking paths around Metsovo
The area around Metsovo offers several opportunities for trekking – hiking. The first route starts from the village Milia of Μetsovo and ends up in Flega. It is a route of 14 km, popular in Metsovo because of the fact that the landscapes you meet really capture you. You begin from Μilia in 1200 meters altitude and you follow north-west course until you reach the narrow passage between the tops Kakoplevri and Tria Sinora in 2200 meters altitude. Then you follow west course and you go up to Mavrovouni and finally on the top Flega in 2300 meters altitude. The length of the route is 14 km and those who will do it in a good mood will reach their destination in 4 hours. In this route you will meet dense forests and plenty of water, while the best season to do this hiking is from Μay until October.

Metsovo – what to see?

Among the sights in the area of Metsovo we can mention the artificial lake of Aoos’ springs situated about 15 km from Metsovo at the plateau Politsies in a beautiful location. Also the Garden of Averof with its unique micrography of Pindos’ entire nature is worth visiting. It is a particularly well-looked-after park in which you will find all species of trees that exist in the wider region. In the town of Metsovo but also in the surrounding regions, you will have the chance to see beautiful monasteries that date centuries ago, still maintained in an excellent condition, though, and true ornaments.

Picture Gallery of Evagelos Averoff
The Averoff Gallery, also known as the Averof Art Gallery of Metsovo, is an Art museum in Metsovo, Greece. It was built in 1985 and inaugurated in 1988. In 1994 the building was extended to include a new wing and its facilities were updated. Its initial collection consisted of 200 paintings and sculptures of Greek artists of the 19th and 20th century, which are still part its permanent exhibition. After the museum’s expansion, the collection was significantly augmented.
Opening hours: 10.00 to 16.30 from September 15 to July 14 and
10.00 to 19.00 from July 15 to September 14 except Tuesdays.

Μuseum of Folkloric Art
The museum of Folkloric art is in the city of Metsovo and it is accommodated in the renovated Mansion Tositsa. It is an example of organization and operation of an old Mansion of Metsovo and contains a particularly large number of old objects of great value. The visit is accompanied with conducted tours every half hour.
Opening hours: 09.00 to 13.30 and 15.00 to 17.00 except Thursday

Μuseum of Hydrokinesis
It is situated in the village Anthochori, very close to Metsovo. It is an open-air museum with old rebuilt watermills and other relevant buildings. It is particularly well looked after, framed by very beautiful picturesque alleys and small bridges. After your walk, you can have your coffee in the refreshment stand that you will find there.

Children’s Library of Metsovo
This library that functions as lending is situated in the city of Metsovo and it exists from 1992. It belongs to the Institution of Baron Michael Tositsas and it contains more than 4.700 titles of children’s and adolescent books. The variety in types is enormous, therefore there are a lot of choices. You will find from fairy tales and books of art and zoology until historical, literary and a lot of other books.
Opening hours: 15.00 to 20.00 from Tuesday until Saturday

In the 1980s, the longest tunnel in Greece was constructed. It alleviated traffic and without twisting roads. In 2006, the connection with Via Egnatia has made the section of GR-6 (Ioannina – Trikala) into this super highway with two interchanges for Metsovo.