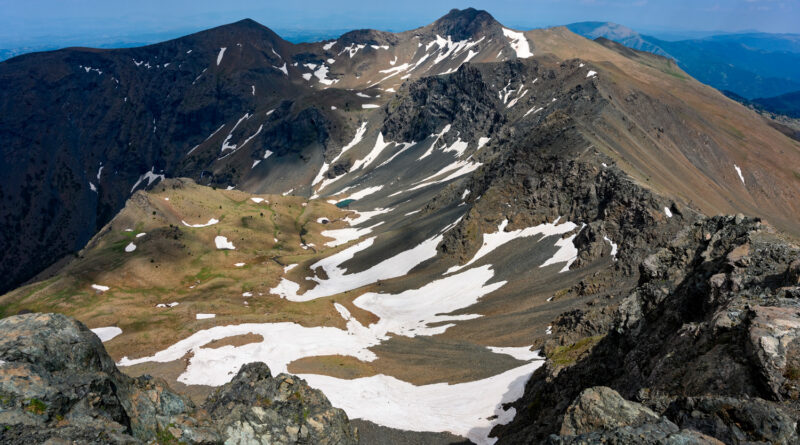 Mount Smolikas, at a height of 2,637 metres above sea level, is the second highest mountain in Greece, after Mount Olympus, and the highest of the Pindus Mountains. The mountain is formed in ophiolite rocks. During the Pleistocene the northern and eastern cirques and valleys were glaciated on several occasions. The last glaciers of this area retreated around 11,500 years ago (Hughes et al. 2006).

The forests and valleys of Mt Smolikas

Forests dominate the low lying areas of the mountain and contains pine and spruce trees, the valley areas, grasslands, bushes and unvegetated portions dominate the higher elevations. The lower parts of the southern slop are covered by beech tree forests. An alpine lake called “Drakolimni Smolika” to distinguish it from the lake with the same name in Tymfi, is located near the summit. The area around the mountain contains villages and forest roads as well as hiking trails. Two roads surround the mountains.

Aoös or Vjosë river runs in northwestern Greece and southwestern Albania. Its total length is about 272 km, of which the first 80 km are in Greece, and the remaining 192 km are in Albania. Vjosë is fed by two secondary branches, both in Albania, the Drino river and the Shushicë.
Its source is in Greece, specifically in the Pindus mountains, in Epirus, near the village of Vovousa. An artificial lake has been constructed at an altitude of 1350 metres, and there is a hydroelectric dam in place since 1987. It flows through the Vikos–Aoös National Park, where it forms impressive canyons. It flows through Konitsa, and enters Albania near Çarshovë. It continues northwest through Përmet, Këlcyrë, Tepelenë, Memaliaj, Selenicë and Novoselë. It flows into the Adriatic Sea, northwest of Vlorë.