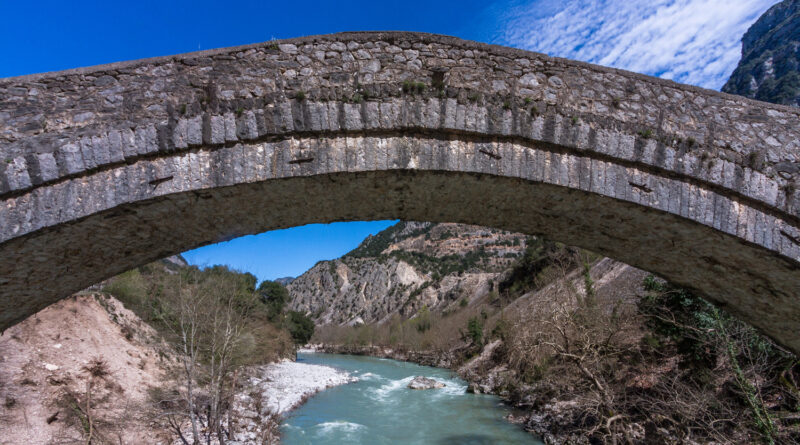 Arachthos is a river and lake in eastern Epirus in Greece that flows from the Pindus mountains and begins in the area southeast of Metsovo in the Ioannina Prefecture near the Trikala Prefecture and flows by numerous village including Elliniko.

Arachthos river is 100 km long and the 8th biggest river in Greece. It is known since ancient times. It was named after the ancient king of Argos, Inachos. Arachthos river has its spring at Mt Lakmos in Northern Pindos. It crosses the prefecture of Ioannina and runs down into the plain of Arta, which together with Louros River form a double delta in Amvrakikos Bay. On its way several rivers and streams run into it and 55 bridges connect its banks. One of them is the impressive Bridge of Plaka, which is the biggest in the Balkans. The bridge of Arta is also one of them.

It enters the Arta Prefecture and runs into the Arachthos Dam which is about 20 km² and prevents flooding of the city as well as supplies water to the most of Epirus. Near the dam is the town of Peta southeast and within the river is the GR-30 (Arta – Karditsa) and flows into Arta’s historic landmark, the Bridge of Arta which is north of the modern day bridge of the Old GR-5. It is made up of stones. The river flows into a small plain and into an area that has grasslands and swamps and is surrounded by farms and finally empties into the Ambracian Gulf in Kommeno, south of Arta. The Arachthos Dam is to be found 2.6 km from Tzoumerka and is an artificial lake of great beauty.