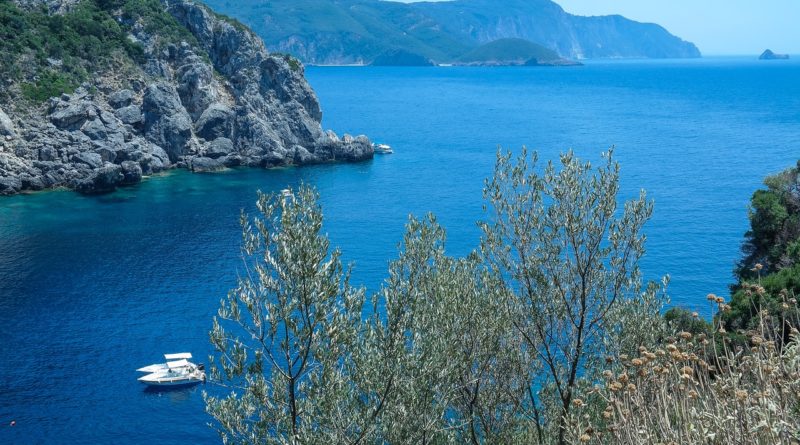 The island is connected to the history of Greece from the beginning of Greek mythology. Its Greek name, Kerkyra or Korkyra, is related to two powerful water symbols: Poseidon, god of the sea, and Asopos, an important Greek mainland river. According to myth, Poseidon fell in love with the beautiful nymph Korkyra, daughter of Asopus and river nymph Metope, and abducted her. Poseidon brought Korkyra to the hitherto unnamed island and, in marital bliss, offered her name to the place: Korkyra, which gradually evolved to Kerkyra (Doric). Together, they had a child they called Phaiax, after whom the inhabitants of the island were named: Phaiakes. This term was transliterated via Latin to Phaeacians. Two high and well-defined ranges divide the island into three districts, of which the northern is mountainous, the central undulating, and the southern low-lying. The more important of the two ranges, that of Pantokrator (the ancient Istone) stretches east and west from Cape Falacro to Cape Psaromita, and attains its greatest elevation in the summit of the same name.

The second range culminates in the mountain of Santi Jeca, or Santa Decca, as it is called by misinterpretation of the Greek designation (Hagioi Deka), or the Ten Saints. The whole island, composed as it is of various limestone formations, presents great diversity of surface, and views from more elevated spots are magnificent. Beaches are found in Agios Gordis, the Korission lagoon, Agios Georgios, Marathia, Kassiopi, Sidari, Palaiokastritsa and many others. Corfu is located near the Kefalonia geological fault formation; earthquakes have occurred. Corfu town and countryside have not lost the traditional architecture from the 16th century.

Corfu’s coastline spans 217 kilometres (135 mi) including capes; its highest point is Mount Pantokrator (906 metres (2,972 ft)); and the second Stravoskiadi, at 849 metres (2,785 ft). The full extent of capes and promentories take in Agia Aikaterini, Drastis to the north, Lefkimmi and Asprokavos to the southeast, and Megachoro to the south. Two islands are also to be found at a middle point of Gouvia and Corfu Bay, which extends across much of the eastern shore of the island; are known as Lazareto and Ptychia (or Vido). Camping areas can be found in Palaiokastritsa, Agrillia, with four in the northern part, Pyrgi, Roda, Gouvia and Messonghi.

Corfu serves as a capital for the periphery of the Ionian Islands. The city with a population of nearly 29,000 in 2001 is a major tourist attraction, and has played an important role since the 8th century. The city has become known as a Kastropolis (Castle City) because of its two castles. In 2007, the old town of the city was inscribed on the UNESCO World Heritage List.
Read more about the architecture of Corfu city

The town of Corfu stands on the broad part of a peninsula, whose termination in the Venetian citadel is cut off from it by an artificial fosse formed in a natural gully, with a seawater moat at the bottom, that now serves as amarina and is called the Contrafossa. The old town, having grown within fortifications, where every metre of ground was precious, is a labyrinth of narrow streets paved with cobblestones, sometimes tortuous but colourful and clean. These streets are known as kantoúnia, and the older amongst them sometimes follow the gentle irregularities of the ground; while many are too narrow for vehicular traffic. A promenade rises by the seashore towards the bay of Garitsa, together with an esplanade between the town and the citadel known as Spianada with the Liston (it) arcade to its west side, where restaurants and bistros abound.

The old citadel (in Greek Palaio Frourio) is an old Venetian fortress built on an artificial islet with fortifications surrounding its entire perimeter, although some sections, particularly on the east side, are slowly being eroded and falling into the sea. Nonetheless, the interior has been restored and is in use for cultural events, such as concerts and Sound and Light Productions, when historical events are recreated using sound and light special effects. These events take place amidst the ancient fortifications, with the Ionian sea in the background. The central high point of the citadel rises like a giant natural obelisk complete with a military observation post at the top, with a giant cross at its apex; at the foot of the observatory lies St. George’s church, in a classical style punctuated by six Doric columns, as opposed to the Byzantine architectural style of the greater part of Greek Orthodox churches.

Achilleion is a palace built in Corfu by Empress of Austria Elisabeth of Bavaria, also known as Sissi. Elisabeth was a woman obsessed with beauty, and very powerful, but tragically vulnerable since the loss of her only son, Crown Prince Rudolf of Austria in the Mayerling Incident in 1889. A year later in 1890, she built a summer palace in the region of Gastouri, now the municipality of Achilleion, about ten kilometres to the south of the city of Corfu. The palace was designed with the mythical hero Achilles as its central theme.
The casino scene of the James Bond film For Your Eyes Only (1981) was filmed at the Achilleion.