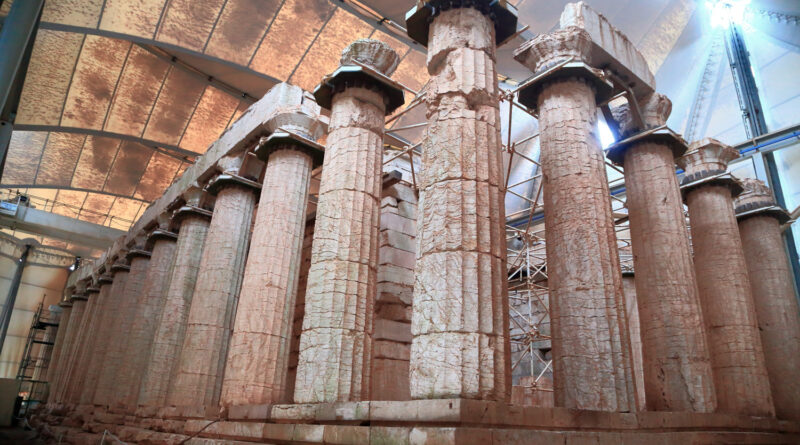 Bassae, meaning “little vale in the rocks”, is an archaeological site in the northeastern part of Messinia Prefecture that was a part of Arcadia in ancient times.

Bassae lies near the village of Skliros, northeast of Figaleia, south of Andritsaina and west of Megalopolis. It is famous for the well-preserved mid- to late-5th century BC Temple of Apollo Epicurius.

Although this temple is geographically remote from major cities of ancient Greece, it is one of the most studied ancient Greek temples because of its multitude of unusual features. Bassae was the first Greek site to be inscribed on the World Heritage List (1986). Its construction is placed between 450 BC and 400 BC.

The temple was dedicated to Apollo Epikourios (“Apollo the helper”). It was designed by Iktinos, architect at Athens of the Tempel of Hephaestus and the Parthenon. The ancient writer Pausanias praises the temple as eclipsing all others but the temple of Athena at Tegea by the beauty of its stone and the harmony of its construction. It sits at an elevation of 1,131 metres above sea level on the slopes of Kotylion Mountain.

The temple is aligned north-south, in contrast to the majority of Greek temples which are aligned east-west; its principal entrance is from the north. This was necessitated by the limited space available on the steep slopes of the mountain. To overcome this restriction a door was placed in the side of the temple, perhaps to allow worshippers to face east or let light in to illuminate the statue.

The temple is of a relatively modest size, with the stylobate measuring 38.3 by 14.5 metres containing a Doric peristyle of six by fifteen columns (hexastyle). The roof left a central space open to admit light and air. The temple was constructed entirely out of grey Arcadian limestone except for the frieze which was carved from marble. Like most major temples it has three “rooms” or porches: the pronaos, plus a naos and an opisthodomos. The naos most likely once housed a cult statue of Apollo. The temple lacks some optical refinements found in the Parthenon, such as a subtly curved floor, though the columns have entasis.

The temple is unusual in that it has examples of all three of the classical orders used in ancient Greek architecture: Doric, Ionic, and Corinthian. Doric columns form the peristyle while Ionic columns support the porch and Corinthian columns feature in the interior.

It was relatively sparsely decorated on the exterior. Inside, however, there was a continuous Ionic frieze showing Greeks in battle with Amazons and the Lapiths engaged in battle with Centaurs. This frieze’s metopes were removed by Charles Robert Cockerell and taken to the British Museum in 1815. (They are still to be seen in the British Museum’s Gallery 16, near the Elgin Marbles). Cockerell decorated the walls of the Ashmolean Museum’s  Great Staircase and that of the Travellers Club with plaster casts of the same frieze.