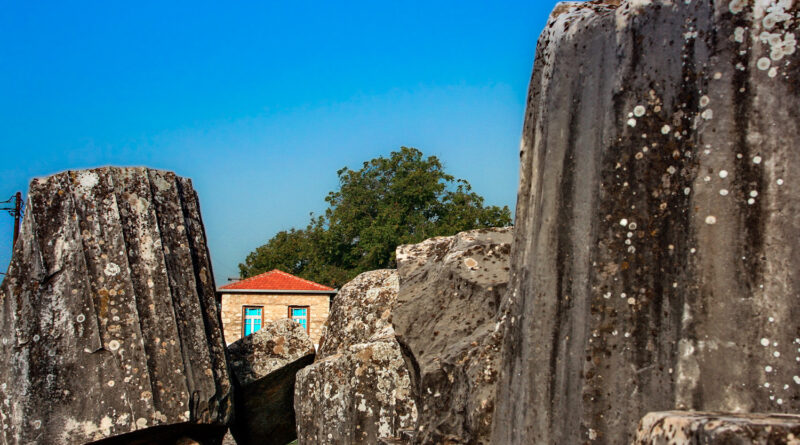 Tegéa was one of the oldest and most powerful towns of ancient Arcadia, situated in Peloponnese, 8 km south of Tripoli.

Tegea was a settlement in ancient Greece. Ancient Tegea was an important religious center of ancient Greece, containing the Temple of Athena Alea. The temenos was founded by Aleus, Pausanias was informed. Votive bronzes at the site from the Geometric and Archaic periods take the forms of horses and deer; there are sealstones and fibulae. In the Archaic period the nine villages that underlie Tegea banded together in a synoecism to form one city. Tegea was listed in Homer’s Catalogue of Ships as one of the cities that contributed ships and men for the Achaean assault on Troy.

Tegea struggled against Spartan hegemony in Arcadia and was finally conquered ca 560 BCE. In the 4th century Tegea joined the Arcadian League and struggled to free itself from Sparta. The Temple of Athena Alea burned in 394 BC and was magnificently rebuilt, to designs by Scopas of Paros, with reliefs of the Calydonian boar hunt in the main pediment. The city retained civic life under the Roman Empire; it was sacked in 395 by the Goths. Pausanias visited the city in the 2nd century CE. The “tombs” he saw there were shrines to the chthonic founding daemones: “There are also tombs of Tegeates, the son of Lykaon, and of Maira, the wife of Tegeates. They say Maira was a daughter of Atlas, and Homer makes mention of her in the passage where Odysseus tells to Alkinous his journey to Hades, and of those whose ghosts he beheld there.”

In the Middle Ages, the town was known as Nikli and the seat of a barony of the Principality of Achaea.

The site of ancient Tegea is now located within the modern town of Alea, which was referred to as Piali (not to be confused with Palaia Episkopi). Alea is located about 10 kilometers southeast of Tripoli. The municipality of Tegea has its seat at Stadio. The province of Megalopoli is bordered to the west and the province of Kynouria is bordered to the east.