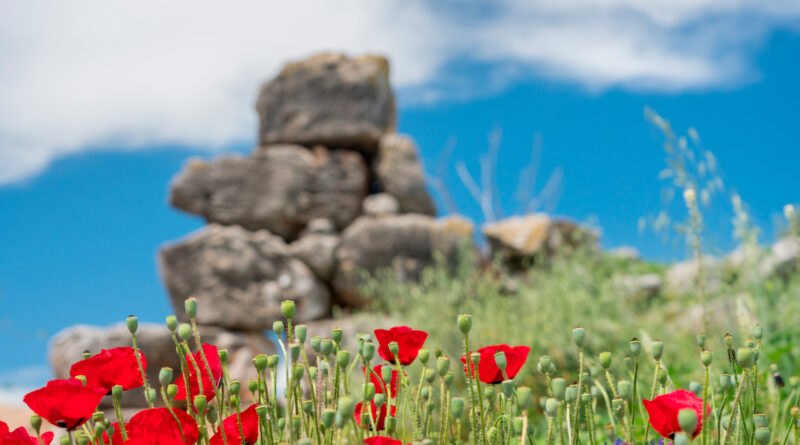 Tiryns is a Mycenaean archaeological site in the prefecture of Argolis in Peloponnese, a few kilometres north of Nauplio.

Tiryns was a hill fort with occupation ranging back seven thousand years, from before the beginning of the Bronze Age. It reached its height between 1400 and 1200 BC. Its most notable features were its palace, its cyclopean tunnels and especially its walls, which gave the city its Homeric epithet of “mighty walled Tiryns“. In ancient times, the city was linked to the myths surrounding Heracles, with some sources citing it as his birthplace.

The famous megaron of the palace of Tiryns has a large reception hall, the main room of which had a throne placed against the right wall and a central hearth bordered by four Minoan-style wooden columns that served as supports for the roof. Two of the three walls of the megaron were incorporated into an archaic temple of Hera.

The site went into decline at the end of the Mycenaean period, and was completely deserted by the time Pausanias visited in the 2nd century AD. This site was excavated by Heinrich Schliemann in 1884-1885, and is the subject of ongoing excavations by the German Archaeological Institute in Athens and at the University of Heidelberg.

Tiryns was recognized as one of the World Heritage Sites in 1999.

Maybe, you will find these places interesting?