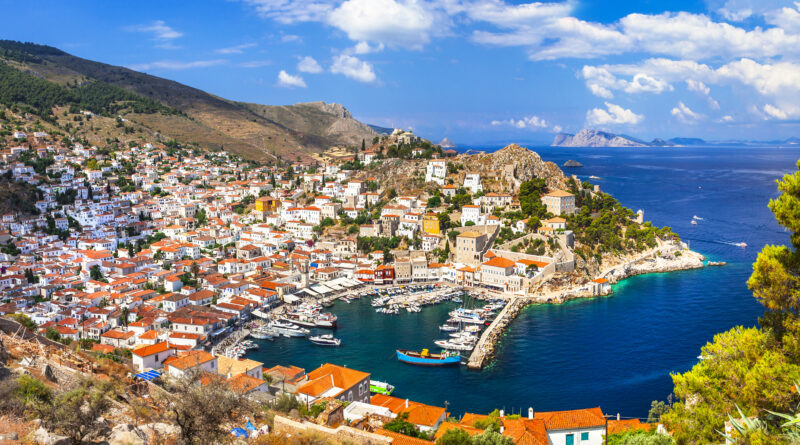 Since ancient times the Saronic islands have hosted cultural centers and historical settlements. Located between Attica and Peloponnese it is the most significant maritime center in Greece. In the Saronic Gulf you will find the Greek islands of Aegina, Agistri, Salamis, Poros, Hydra, and Spetses together with a few smaller islets. These islands are blessed with beautiful sandy beaches and crystal clear waters. Just a short ferry or boat ride away from Athens, weekenders use the Saronic islands as an escape from the big noisy city.

Just a quick ferry ride from Athens you find Aegina a Saronic beauty situated near Poros and Agistri. With ferries departing from Piraeus port you can arrive in Aegina in less than an hour.

Agistri is a ‘weekend darling’ of the Athenians. Set in the Saronic Gulf next to Poros, Spetses, Aegina, and Hydra Agistri is a weekend getaway for Athenians, of extraordinary beauty with a lush green landscape and emerald, crystal-clear waters.

Hydra is a true gem, set in the heart of the Argo Saronic Gulf. No cars, no stress, just the picturesque port with the white boats anchored in the marina and restaurants along the waterfront. Just two hours boat ride from Piraeus port.

Just off the coast of Peloponnese sits Poros in the heart of the Saronic Gulf, close to Aegina and Agistri. Like the rest of the Saronic islands it is popular for weekend getaways from Athens. The ferry ride from Athens to Poros lasts only an hour.

Spetses island is popular not only for Athenians craving a weekend getaway but also for international travellers. Spetses has an elegant atmosphere with its beautiful marina and Venetian mansions in Spetses town.

Salamis Island is quite popular for weekenders from Athens and Piraeus; its population rises to 300,000 in peak season of which ca. 31,000 are permanent inhabitants.

Dokos island has become quite famous due to the discovery of the oldest underwater shipwreck known to man.

Historical islands in the Argo-Saronic archipelago

The Saronic Islands or Argo-Saronic Islands is an archipelago in Greece, named after the Saronic Gulf in which they are located, just off the Greek mainland. The main inhabited islands of this group are Salamis (where the ancient Greek navy defeated the Persians in the Battle of Salamis), Aegina, Angistri, and Poros. The islands of Hydra and Dokos, which lie off the northeast tip of the Peloponnese (technically between the Saronic Gulf and the Argolic Gulf), are sometimes included as part of the Saronic Islands. It is especially apt in describing Hydra and Dokos, which do not really lie in either gulf. Many mainland Greeks have vacation homes in the Saronic Islands, which are regularly served by ferries from Piraeus and the Peloponnese.