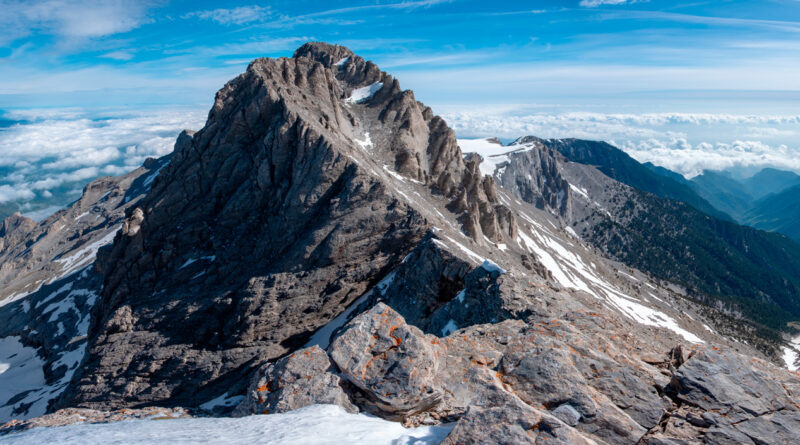 Mount Olympus is the highest mountain in Greece, located on the border between Thessaly and Macedonia, about 100 kilometres (62 mi) away from Thessaloniki, Greece’s second largest city. Mount Olympus has 52 peaks.
The highest peak Mytikas, meaning “nose”, rises to 2,917 metres (9,570 ft). It is one of the highest peaks in Europe in terms of topograhic prominence.

Mount Olympus is noted for its very rich flora with several species. It is a National Park of Greece and a World’s Biosphere Reserve.
In Greek mythology Olympus was regarded as the “home” of the Twelve Olympian Gods of the ancient Greek world. It formed itself after the gods defeated the titans in the Titan War, and soon the palace was inhabited by the gods. It is the setting of many Greek mythical stories. Olympus was not shaken by winds nor ever wet with rain, nor did snow fall upon it, but the air is outspread clear and cloudless, and over it hovered a radiant whiteness.

Climbing Mount Olympus is a non-technical hike, except for the final section from Skala summit to Mitikas summit, which is YDS class 3 rock scramble. It is estimated that 10,000 people climb Mount Olympus each year, most of them reaching only the Skolio summit. Most climbs to Mount Olympus start from the town of Litochoro, which took the name City of Gods because of its location on the roots of the mountain. A local from Litochoro, Christos Kakalos, became the first to reach the Mitikas summit on 2 August 1913.
From there a road goes to Prionia, where the hike begins at the bottom of the mountain.