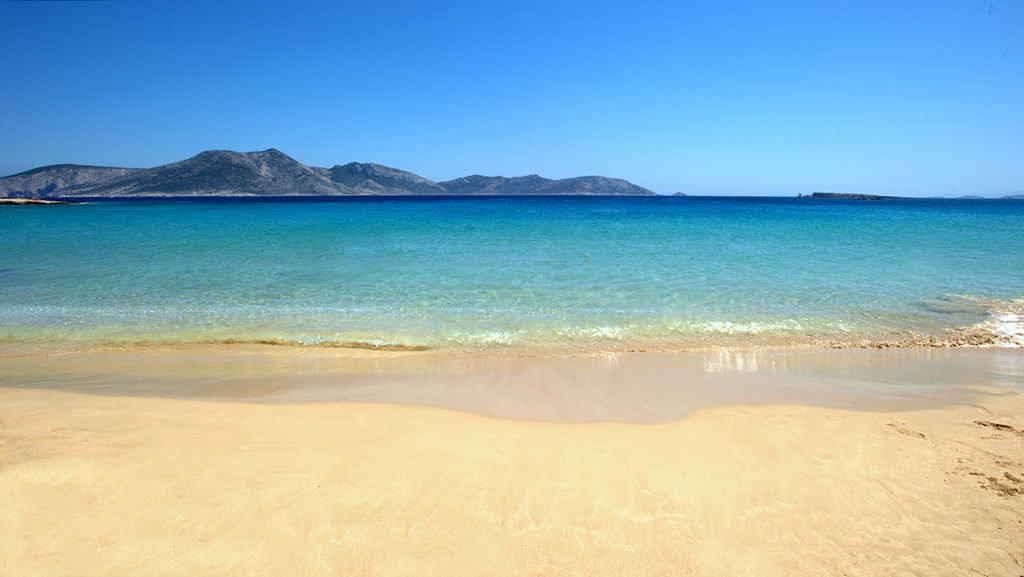 Koufonisia is a small cluster of islands consisting of two main islands, Kato (Lower) and Pano (Upper) Koufonisi and some smaller islets. Together with nearby Keros, they all belong to the complex of “Small East Cyclades”. Geographically, you’ll find them on the southeast side of Naxos, west of Amorgos. Keros, which is uninhabited, is protected as an archaeological site from which a large number of ancient Cycladic art pieces have been excavated, among which are the figure of Big Mother (1.40 m. tall), and the famous statuettes “the Piper” and “the Harpist”, now exhibited at the National Archaeological Museum of Athens.

Their name ‘Koufonisia‘ comes from the many caves the waves have shaped along the coastlines, which, when seen by pirates, gave them the impression that the islands (in Greek “nissia”) were hollow (in Greek “koufio”) – therefore Koufionisia and later Koufonisia. Pano Koufonisi is the smallest and most densely populated island belonging to the Cyclades islands. It has an extent of 3,5 km² and a population of 366. The main occupation of the locals is fishing, so Koufonisi is a true fishing village where the visitors can enjoy fresh fish and seafood.
The white windmill on the east side of the port welcomes the visitors when they arrive at the island. Chora is built on the southwest coast of Koufonisi and is a characteristic example of Cycladic architecture. The amazing beaches – of which the majority are sandy – are part of the magic picture of the island. Tourism has developed in Koufonisi the last ten years, so the natural beauty and the traditional colour of the islands have remained untouched. The natural beauty along with the warm hospitality of the residents and the reasonable prices of accommodation ought to m During your stay on Koufonisia there are several places of interest that you should visit, such as the central and the back port, the piscatorial shelter, the carnagio, the windmills and the churches of Agios Georgios, Agios Nikolaos and Profitis Ilias. The fishermen in their small boats (kayakes) is a characteristic picture of the island. The church of Virgin Mary is one of the most important sights on Koufonisi, whereas in Keros apart from the archaeological findings, one can enjoy the magic sunrise.

Celebration of the Fisherman

on Saturday, June the 30th The photos of the fishermen’s boats above are all courtesy of Mimis-Nena in Koufonisia, who kindly lent the photos for this post. You can view many other great photos of Koufonisia and other places at their website Dreamyshoots.com. The photo in the middle with the dancing girls is courtesy of Rafailia, a young, promising photographer, also from Koufonisia.

Each year on the last Saturday in June locals and visitors get together in the habor of Pano Koufonisi in order to celebrate the ‘feast of the fisherman’ with fresh, delicious seafood and wine offered to everyone present. At this beautiful festival the local musicians build an exciting atmosphere combined with the sublime spectacle of dancing groups both from Koufonisia but also from other islands participating. Finally, through common effort they stir up people and involve everyone in dancing and celebrating.
The “Fisherman’s Feast” at Koufonisia started many years ago as a result of the abundance of fish in the area and the enthusiasm of the locals with the coming of spring and the first visitors. So “…dance, dance, do not grieve the shoes, they will rest the hours you sleep…” like the old island song so nicely encourages us.
Don’t miss it!

Hiking: Along the coast of Koufonisia, from Pariano to Pori, there are small, magic bays with sandy beaches which alternate with caves in the rocky shore created by the sea and time. Generally, the beaches on the east side of the island are better and the vegetation there is denser.
A path can lead you to the most beautiful beaches such as Harokopou (Phoinikas), Platia Pounta, which is the most popular, Phanos and Pori, both less crowded but beautiful. Pori, which is told to be the best beach of all, is 4 km from Chora. The beachside road may seem a long walk in the summer heat, and in any case the second path, crossing the interior of the island, is very beautiful. On the footpath you will see white lilies, a rare species that is met only in Cyclades. Swim-Trekking: With some of the most incredible beaches and water in the Mediterranean, a week of island hopping swims around the Smaller Cyclades is a must. As you navigate between five islands (Schinoussa, Koufonisia (2), Keros, Naxos) the adventure of swimming between them under a full safety escort allows you to appreciate the isolation and beauty of each island seeing them like no other tourist or local. Further info: SwimTrek.com

Windsurfing: The Koufonisia Islands lend themselves to water sports such as surfboarding. Pori is preferred among surfers for training as well as the beach of Platia Pounta.
Geolocation: Windsurfing at the port of Koufonisia Built in 1852. From 1890 to 1930 it functioned as a primary school. In 1996 it became one of the most popular café-bars in Koufonisia. In an ambient environment with rock music you can enjoy delicious crepes, sophisticated cocktails while playing board games or chatting with the friendly owners. You’ll find it on the cobbled main street of the village. It has wireless internet. As mentioned above each year from May until late September it is hosting a photo exhibition from Dreamy Shoots (www.dreamyshoots.com)

Touring in the Cyclades islands: Naxos

Touring in the Cyclades islands: Kea

Touring in the Cyclades islands: Paros