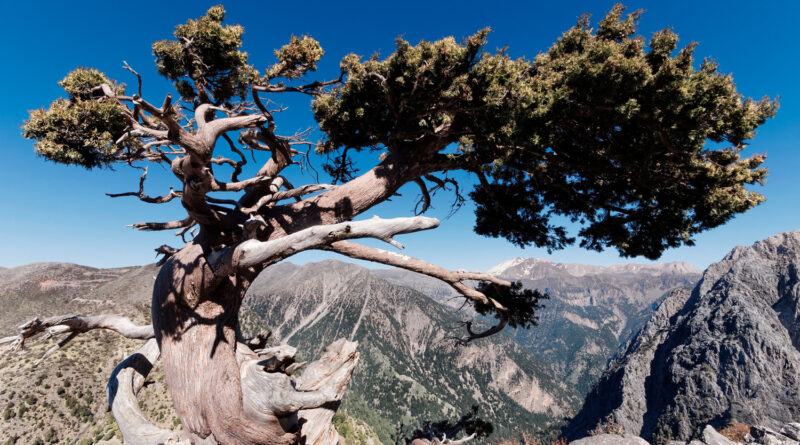 Lefka Ori (or White Mountains) in Crete are a UNESCO World Network of Biosphere Reserve site. You will find this stunning mountain range in the region of Chania in western Crete. Hikers as well as bird lovers enjoy Lefka Ori both during summer and winter. If you are looking for species of larger birds like vultures and eagles, you have come to the right place.

Where is the mountain range Lefka Ori?

What did the White Mountains get their name from?

Lefka Ori (meaning “White Mountains”) or Madarés (from Cretan Greek meaning “without coverage, bald, bare of any vegetation for high mountain areas”) is a mountain range located in Western Crete, in Chania prefecture. The White Mountains or Lefka Ori occupy a good part of the centre of West Crete and are the main feature of the region. They consist mainly of limestone, from light grey to bluish or black color. The “White Mountains” have got their name from the perpetual white or off white color of their peaks as the off white of limestone during the summer and fall interchanges with the snow that covers the peaks until late in spring.

How high are the White Mountains in Crete?

The highest summit is Páchnes with 2,453 m (8,048 ft) and the range has more than 30 summits that are over 2,000 m (6,562 ft). The Lefka Ori have about 50 gorges as well, the most famous being the Samaria Gorge. Another characteristic of the mountain range is that there are a number of plateau that exist at heights of 500–1,100 metres (1,640–3,609 ft), such at those of Askifou, Impros, Kallikratis, Anopolis, and Omalos which are all surrounded by mountains.

How to reach Lefka Ori?

There are only a few main roads leading into the White Mountains. From the North the roads to Omalos and the entrance of the Samaria Gorge and the road to Chora Sfakion through the plateau of Askifou further to the east. There are other approaches from the west from Sougia and Paleochora leading to Omalos as well as approaches from northeast from Argyroupoli – Asi Ghonia and from Plakias-Frangokastello along the southern coast in the East. There are also a few other minor roads leading to higher altitudes.

The high desert in the White Mountains

The central and southern part of the Lefka Ori lying at an altitude of 1,800 m (5,906 ft) and above resembles a “moon landscape”. This is technically called a high desert. It is unique for the northern hemisphere.

Refuges in the Cretan White Mountains

The Lefka Ori has a rich history as a hide out for rebels during the Cretan uprisings against the Venetian and Ottoman rulers, as well as during the German Occupation (1941–1945).
The Lefka Ori are home to both caves in Greece with depths greater than one kilometer, Gourgouthakas and the Cave of the Lion.